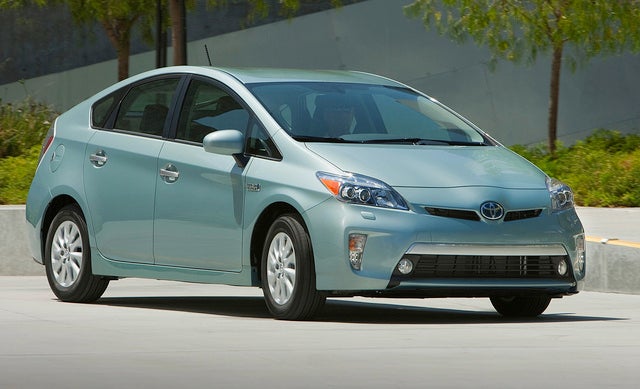 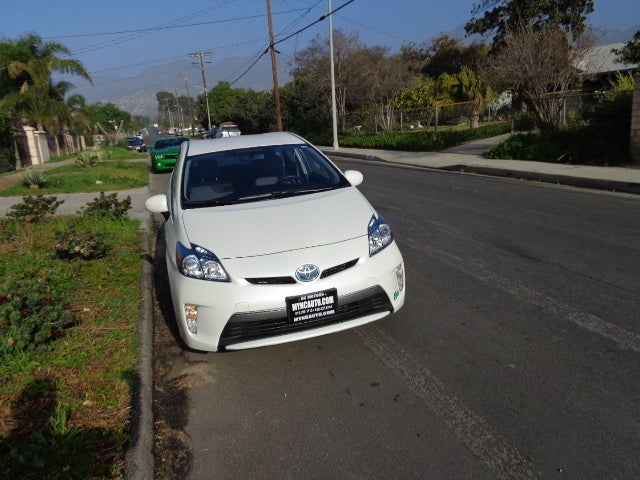 Still relatively new in the Prius lineup, the 3-year-old Toyota Prius Plug-In hybrid vehicle receives a number of new standard features for 2014, including heated cloth front seats and a Remote Climate system, which enables owners to activate the vehicle's air-conditioning system remotely. In addition, the Plug-In can now travel further in electric-only EV mode and includes 3 years of Roadside Assistance, up from 2 the previous year.

Available in Base and Advanced trims, the Prius Plug-In comes well-equipped with a wide range of standard features and delivers exceptional fuel economy of up to 50 mpg when running in hybrid mode and up to 95 mpge (miles per gallon equivalent) when operating on electric power alone. The Plug-in runs in EV mode at speeds of up to 62 mph, for up to 11 miles, and switches seamlessly between electric and hybrid operation. The Plug-In charges in 3 hours using the supplied charging cable and a standard household electrical outlet, or in 1.5 hours with an installed dedicated 240-volt Electric Vehicle Supply Equipment (EVSE) outlet. It's not necessary to charge the Plug-In daily, but electric operation greatly increases fuel economy.

Like other Prius hybrids, the Plug-In comes equipped with Toyota's Hybrid Synergy Drive and a 4.4kW, 176-pound lithium-ion battery, which fits under the rear cargo floor. The hybrid powerplant combines a 1.8-liter Atkinson-cycle 4-cylinder gas engine with a 60kW electric motor. The gas engine produces 98 hp, which increases to 134 hp when the electric motor kicks in. Combined torque tops out at 153 lb-ft. To maximize performance and fuel economy, the Prius can run on the gas engine alone, the electric motor alone or a combination of the two. The hybrid powerplant mates to an electronically controlled continuously variable transmission (CVT) and powers the vehicle through the front wheels.

Outside, the Prius Plug-In retains the same exterior design as the base Prius, with an aerodynamic shape and a low coefficient of drag of just 0.25, which helps to maximize fuel efficiency. Exterior features include projector-beam halogen headlights with auto-off on the Base trim and auto-on/off on the Advanced, as well as heated power side mirrors, a rear spoiler and LED daytime running lights and taillights. The charge port is illuminated for easy operation at night and includes a charging indicator light. Foglights and LED headlights are available as part of an option package for the Advanced trim.

The Prius Plug-In's one weak spot remains its ride and handling. Due in part to its small 15-inch wheels and low-rolling-resistance tires, the Plug-In's ride can feel harsh at times, especially on rough roads. Testers would also like to see better responsiveness from the power-assisted rack-and-pinion steering. Like other Prius hybrids, the Plug-In rides on an independent front suspension with MacPherson struts and a stabilizer bar, and a torsion beam rear suspension. Disc brakes are standard on both trims, with integrated regenerative braking. However, some reviewers say the regenerative braking system can affect brake feedback and feel at times. The Plug-In has a fairly tight curb-to-curb turning diameter of 34.2 feet, making it maneuverable on tight streets and in parking lots.

Inside, the Plug-In comes equipped with a strong list of standard features. In addition to the new heated front seats and Remote Climate system, such features as automatic air conditioning, a Smart Key system with push-button start, a dual glovebox, cloth upholstery and a tilt/telescopic steering wheel with audio, cruise, Bluetooth and climate controls are included. A Multi-Information Display provides details about the charging system and the hybrid powerplant, while a 6.1-inch Display Audio touchscreen integrates with a navigation system and a 6-speaker audio system with HD radio, SiriusXM satellite radio and a rear-view camera, as well as a CD player, USB port and auxiliary input jack.

The Prius Plug-In was named a Top Safety Pick for 2013 by the IIHS, which should carry forward to 2014. Similarly, the NHTSA awarded the Prius an overall safety rating of 5 out of 5 stars. Toyota equips the Plug-In with 7 airbags, including a driver's knee airbag, as well as vehicle stability control, traction control and antilock brakes with brake assist and electronic brakeforce distribution. Both trims also include Hill Start Assist, which aids the driver when starting from a full stop on a hill. The Advanced trim gets Toyota's Safety Connect service, which includes emergency assistance, roadside assistance and a stolen vehicle locator service. Optional safety features include dynamic cruise control and Toyota's Pre-Collision system.

What's your take on the 2014 Toyota Prius Plug-In?

Users ranked 2014 Toyota Prius Plug-In against other cars which they drove/owned. Each ranking was based on 9 categories. Here is the summary of top rankings.

Have you driven a 2014 Toyota Prius Plug-In?
Rank This Car

How Many Amps Does The Charger Draw On 120 Volts? Is There An Amp Selector...

What's the best way to maximize hybrid battery charge in a 2014 Toyota Prius Plug In? I have been told there is an algorithm that determines how much to charge the battery. The only way I have found...

105 views with 5 answers (last answer about a year ago)