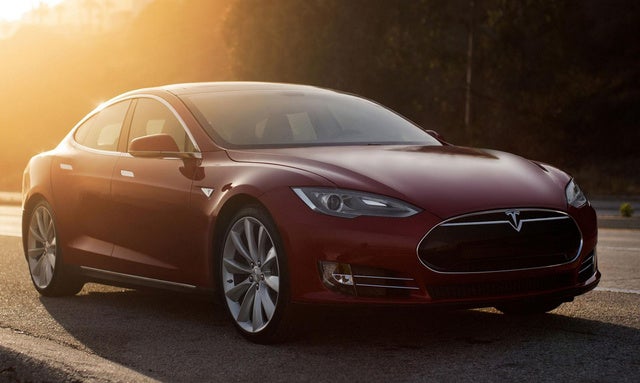 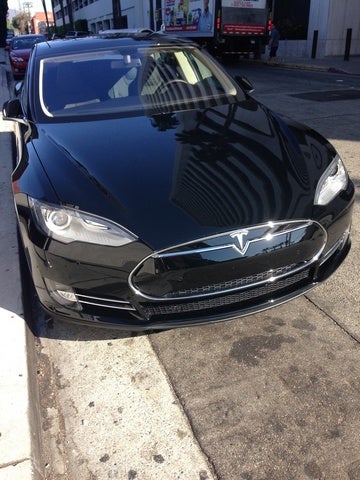 For 2014, Tesla expands the international markets for its Model S 4-door sport sedan, now offering the electric vehicle for sale in China as well as the U.S., Canada and a few European countries, but the cutting-edge Model S itself remains unchanged. In many ways, that's a good thing. Credit automotive designer Franz von Holzhausen, formerly of Mazda but currently working in-house at Tesla, for creating an exterior look for the Model S that perfectly balances sportiness and sophistication, resulting in one of the more attractive luxury sedans on the market today. Not minimalist in styling but far from over the top, the 2014 Tesla Model S's exterior design strikes all the right notes with its subtle open-mouthed grille, cat-like headlights, clean sidelines, sloping rear roofline and short rear deck.

But the Model S has a lot more to offer than its eye-catching design. The automaker's first 4-door sedan hatchback, the Model S represents Tesla's move toward more affordable and functional electric vehicles. Thanks to available rear-facing seats in the cargo area, the Model S can carry up to 7 passengers, making it a viable family hauler. It can achieve distances of up to 265 miles on a single charge, depending on the size of the battery. It emits zero emissions, establishing its green cred. And it backs up all that with some impressive sports car stats, including a 0-60 time of up to 4.2 seconds and a top speed of up to 130 mph.

The Model S also delivers well-balanced handling and a comfortable ride, thanks in part to its 50/50 weight distribution and its low center of gravity due to the location of its powertrain and battery. Unlike gas-powered vehicles, the Model S has no internal combustion engine under the hood. In fact, the Model S devotes its front "engine" compartment to storage space. Instead, the Model S's electric powertrain sits between the rear wheels, where it can send torque to the wheels with maximum efficiency, and consists of a single moving part, the rotor. Other components of the liquid-cooled powertrain also include a motor, drive inverter and gearbox. The setup results in instantaneous acceleration when the driver steps on the pedal and a smooth, steady delivery of power.

Tesla offers the Model S with a choice of 2 batteries and 3 performance levels. The entry-level Base trim comes equipped with a 60kWh battery, which generates 302 hp and 317 lb-ft of peak torque in a wide range from 0-5,000 rpm. The Base has a cruising range of 208 miles on a single charge. When equipped with the 60kWh battery, the Model S jaunts from 0-60 in 5.9 seconds and has a top speed of 120 mph. The battery comes with a warranty for 8 years or 125,000 miles. Owners can add a supercharging system, which reduces charge time, as an option.

Owners seeking more power and driving range can opt for an 85kWh battery, which increases hp to 362 and torque to 325 lb-ft delivered from 0-5,800 rpm. Driving range increases to 265 miles on a single charge, while the 0-60 time drops to 5.4 seconds, and top speed rises to 125 mph. The 8-year battery warranty still applies, with unlimited mileage. The supercharging system is included with the larger battery.

The automaker also offers a Performance version of the Model S with the 85kWh battery and a high-performance drive inverter, which boosts horsepower to 416 and torque to 443 lb-ft over a range from 0-5,100 rpm. The run to 60 mph drops to 4.2 seconds and top speed rises to 130 mph.

In all trims, the battery integrates with the chassis and runs the full length under the passenger cabin, from front to rear wheels, resulting in a low center of gravity. Owners can recharge the battery using a 240- or 120-volt outlet or at a public charging station with a Mobile Connector, which comes standard. Owners can also install a High Power Wall Connector in the home, which helps reduce charge time. The battery charges at a rate of 29 miles of range per hour with a 240-volt outlet, and up to 58 miles of range per hour with the home charging system and twin chargers. Using the supercharging system, the battery will achieve a 50-percent charge in about 20 minutes. Tesla disguises the on-board charge port by hiding it behind the taillight on the driver's side.

The chassis features a Smart Air Suspension system, which lowers the ride height of the Model S at higher speeds to improve aerodynamics and efficiency. Owners can also raise and lower the ride height manually using a touchscreen in the cabin. The suspension includes a double-wishbone setup in the front and an independent multi-link coil spring rear configuration, adding to the vehicle's agility and ride comfort. Variable-ratio speed-sensitive rack-and-pinion electric power steering comes standard, providing precise control and good feedback. The Model S rides on 19-inch aluminum wheels with all-season tires.

Exterior features include automatic on/off HID headlights, backlit side turn signals and LED taillights. The Performance trim also includes Tesla Red brake calipers and a carbon fiber spoiler. In an effort to reduce drag in all areas of the exterior design, the door handles retract into the body when not needed and slide out when the driver approaches the vehicle with the key. An aluminum roof comes standard, although owners can opt for a panoramic glass roof which blocks 98 percent of visible light and 81 percent of heat when closed, and opens wide to provide a convertible-like driving experience. The rear liftgate opens and closes manually.

Inside, a 17-inch touchscreen, mounted in the center stack, dominates the driver-oriented cabin. Vertically oriented like an oversize tablet, the touchscreen provides access to all the Model S's mechanical systems, settings, navigation system, cabin controls and entertainment systems. It's truly a cutting-edge system and fits well with the high-tech nature of the Model S. Synthetic leather upholstery and microfiber trim give the cabin an upscale look, along with piano black accents, metal interior door handles and a 3-spoke multifunction steering wheel. The heated front seats feature 12-way power adjustment, while the rear seatback splits 60/40 and folds down. For entertainment, the Model S comes equipped with a 7-speaker 200-watt audio system with HD radio and dual USB ports. Other standard interior features include a power tilt/telescopic steering column, a backup camera, dual-zone automatic climate control, cruise control, Bluetooth and keyless entry.

Eight airbags, including head, knee and side-curtain airbags, come standard on the Model S, along with electronic stability control, traction control and antilock brakes with ventilated rotors. The NHTSA recently awarded the Model S a top safety rating of 5 out of 5 stars.

Users ranked 2014 Tesla Model S against other cars which they drove/owned. Each ranking was based on 9 categories. Here is the summary of top rankings.

Have you driven a 2014 Tesla Model S?
Rank This Car

How Do You Determine An Electric Car's MPG?

I'm looking at used electric cars and you have MPG listed? How can you determine an electric car's MPG when it doesn't have a gas tank? When there's a mileage listing of 97 MPG... what does that m...

31 views with 3 answers (last answer about a year ago)

I Was Told My Car Was Overpriced. Dealer Offered Me $6000 More Than CarGur...

Asking About The 2014 Model S Tesla In Lake Worth, What Was The Accident O...

2014 tesla model s in lake worth, fl. what was the accident on it and can it be installed with autopilot

How Do I Report Scammers?

Someone is using your site to try to scam people. He lists nice cars at about half what they are worth. When you respond, he takes the conversation to private email. Then he tells a story about h...