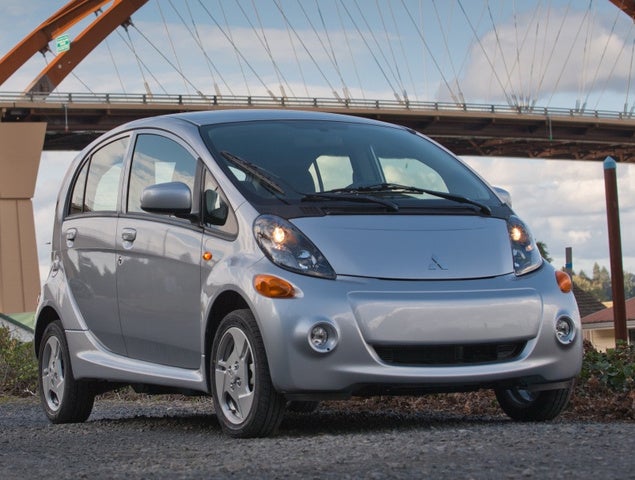 Nothing like a 60% price reduction to motivate the masses, eh? Whereas the 2012 Mitsubishi i-MiEV came with a sticker price approaching $30K, you can get an updated 2014 version—with a long list of newly standard features—for around 10K. Of course, that takes into consideration the federal tax incentive of $7,500 coupled with whatever your state is offering, but Mitsubishi itself is dropping the price this year by more than $6K! In states that see the benefit in encouraging alternative fuels, that means the final cost nestles in quite comfortably close to that magic $10K number!

This would be standalone news, but when Mitsubishi sees fit to also add a bunch of new features as standard faire, this little electron eater gets even harder to ignore.

Not that we see a lot of “Kei” cars scooting around U.S. highways. Kei is a Japanese designation that translates to “matchbox car.” Here they were simply too small for our safety regulations—apparently we frown upon cars that double as coffins in accidents—so the U.S. version is nearly 8 inches longer than its Japanese cousin.

So what does the best electric deal on the road offer the discerning consumer? For 2014, the i-MiEV is rolling fresh with new heated seats up front and heated mirrors on the sides, leather on the steering wheel and shift knob, aluminum wheels, fog lights and daytime running lights, and the full charge system. That means you can utilize 8A and 12A charge ports for charging in 22 and 14 hours, respectively, as well as having the option of the CHAdeMO DC quick-charge port, which Mitsubishi claims will give you an 80% charge in just 30 minutes. To monitor all this electrical exchange, a battery warning system is standard now as well.

Eagle-eyed electrophiles will notice some other aesthetic enhancements as well, although none flashy enough to overshadow 2014’s other upgrades (and discounts). If you decide to add the SE Premium Package, you’ll enjoy HD navigation, a rear-view camera, 360-watt stereo and an auxiliary USB.

Those looking for powertrain upgrades will be disappointed, however, as the i-MiEV is still powered by the same 16kWh lithium-ion battery that delivers 66 hp and 145 lb-ft of torque through an electric motor. This is not a road-trip car, and that has nothing to do with the scarcity of quick recharge stations. Even on the coasts those can be quite rare. No, the i-MiEV has a total range of just 62 miles and a claimed top speed of 81 mph. Good luck reaching either milestone, however, as real-world testing has put them in a certain elusive category. However, for a city car this is more than adequate. An overwhelming majority of drivers eat up far less than 60 miles every day, putting the i-MiEV squarely in the “useful” category.

If you’ve been thinking about entering the electrical arena, and if frequent road trips aren’t on your list of necessaries, this is the time to check out the i-MiEV. The only bad news is how badly those who bought one in 2012 are getting screwed. If you can resist the nasty looks and don’t mind driving something a little different, I say, “Charge!"

What's your take on the 2014 Mitsubishi i-MiEV?

Lucas I don't consider buying my I-MiEV in 2012 as being 'screwed'! The I-MiEV in the summer of 2012 was the lowest priced EV on the market at that time and with my federal incentives I was able to bring the price of the car down to the level of a comparable ICE economy car with more features than my old Versa SL with Tech Package had. The only screwing that was going on was me screwing the oil companies out of my $40 a week gas budget and I was happy to give my money to auto manufacturers to encourage them to make more electric cars and so more people could enjoy screwing the oil companies. So to that, I say "Soooooo-Weeeee!"

Jay Likewise, my December 2011 purchase of an i-MiEV made the car cash-flow positive for the first year, and 33,000 miles later, I'm still leaving guzzlers behind at EVery red light at a fuel cost 93% below a 20 mpg vehicle. With public charging infrastructure, I put 156 miles on the car just yesterday thanks to two 20 minute pit stops. (Fast charging the i-MiEV only takes 12 to 19 minutes, not the 30 minutes quoted in the article.)

JoeSiu Michael, thank you for your review. As a 25-month and 25,000-mile private owner of a 2012 i-MiEV, may I offer a few observations - 1. I believe you meant to say $6300 price reduction, not 60%. After federal and state incentives, it will be the lowest-cost EV available, yet one with all the features one needs for a very competent daily driver. 2. No need to dwell on recharge times, as for most of us an overnight charge at 120vac (plain old wall outlet) usually yields a fully-charged car by morning. Even though the car's present daily range using the built-in standard J1772 is easily 150-200miles, the inclusion of CHAdeMO quick charging allows for the occasional longer trip comfortably. 3. I believe you meant to say "To monitor all this electrical exchange, a battery warning system is standard now as well". I believe you meant to say that a battery WARMING system is now standard, With CHAdeMO, the i-MiEV always had a forced-air battery cooling system, and a battery warming system simply rounds-out the car's battery protection in extremely cold climates (it kicks in at -15degF). 4. I didn't realize that there was going to be an SE version of the 2014 i-MiEV, as I considered the pricy nav package in the 2012 i-MiEV superfluous for us everyday local drivers. What Mitsubishi has done is now included some of the nicer previously-optional items into the 2014 i-MiEV that had been included in the higher-end SE model, as well as new niceties such as passenger-seat heater and a light to illuminate the charging port. Heated driver's seat was always standard. 5. I don't know how much you have driven an i-MiEV, but I think you would have found that it can indeed cruise at 75-80mph (it noticeably limits its speed to 81mph), if you're willing to put up with the significant range reduction due to aerodynamic drag at that speed. You would also have found the i-MiEV's typical EV acceleration more than adequate for any sort of highway merging. 6. My wife and I have no problem making single-charge drives of 75miles in a mixture of highway-city driving, without even depleting the battery fully. With the use of either public charging stations or friends' garage power outlets, we have no trouble putting on 150-200-mile days. According to the EPA, this is one very efficient vehicle with a 126mpge city rating! The prominent Range Remaining gauge (it's dependable algorithm based on how one drove for the preceding 15 miles), coupled with a normal 'fuel' gauge, ensures there is absolutely no excuse for concern over arriving at a destination - especially in this day and age of GPS, smartphones, and Google maps. 7. I don't consider myself as having been screwed by the reduced i-MiEV pricing, as I have enjoyed two years of emissions-free and ridiculously low-cost and maintenance-free driving in what has become the PRIMARY car in the family, the Gen1 Honda Insight hybrid reserved for only (rare) long trips. 8. I wish you had dwelled a little on the terrific features of the i-MiEV that makes it eminently suitable as a daily workhorse vehicle - a) Small outside dimensions and superbly-tight turning radius that makes it great for squeezing into tight urban parking spots b) With the back seats down, the flat-floor tall interior is cavernous compared to almost all other EVs. c) Entry and egress is particularly easy with this high-seating position vehicle. d) The interior is surprisingly roomy, with excellent all-round visibiity if it weren't for the obtrusive headrests (which, thankfully, are easily removable when not carrying passengers). 9. From a performance perspective - a) Despite "looking" top-heavy, the i-MiEV is actually incredibly stable with a very low center-of-gravity due to the centrally-located battery pack under the vehicle - it stays glued to the road! Active Stability Control is standard, and it's virtually impossible to 'lose it' with this very agile little car which is simply fun to drive, especially on mountain roads. b) The manually-controlled three levels of regeneration and Eco mode are rarely mentioned in reviews, but simply add to the fun driving experience and allow for very easy speed-bleeding and thus battery recharging on downhill runs - how often have you seen a fuel gauge actually go back up?! I'm looking forward to the 2014 i-MiEV (I have friends waiting …) and thank you again for your review.

Have you driven a 2014 Mitsubishi i-MiEV?
Rank This Car