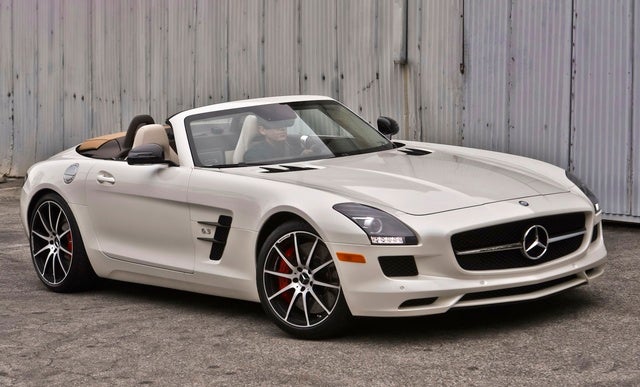 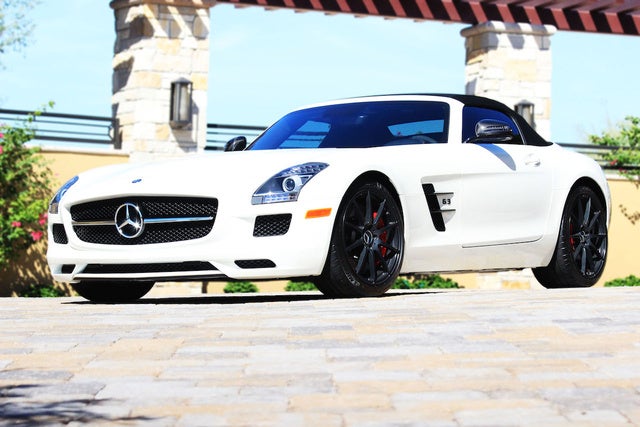 Mercedes-Benz recently announced that it will end production of its AMG-developed SLS-Class AMG GT Coupe and GT Roadster in mid-2014, so if you'd like to get your hands on this verifiable world-class exotic supercar, you'd better act fast. The first vehicle fully developed by AMG, the automaker's in-house high-performance tuner, the SLS-Class turned heads of car aficionados everywhere when it debuted in January 2010, thanks to unique design features like its gullwing doors and its distinctive profile, which in some ways resembles the classic Corvettes of the 1950s. More accurately, however, the SLS-Class draws its styling cues from the iconic Mercedes-Benz 300GL Gullwing of the 1950s. Perhaps it's not coincidental that the classic 'Vette and the 300GL share a similar shape and profile, as they were both hallmarks and standouts of a golden era of car design.

When it debuted in 2010, the SLS-Class was a design departure for Mercedes, due in part to its doors, which swing upward rather than forward. Thanks to its retro design with modern influences, as well as its power, performance and techology, the SLS-Class continues to ride on the cutting edge. However, the SLS-Class's exterior styling receives the greatest credit for making it a standout in today's automotive world. For 2014, the SLS-Class comes in Gullwing coupe and Roadster convertible body styles. The convertible receives traditional front-hinging doors, as well as a tailored power soft top, which raises and lowers in 11 seconds.

On both body styles, the bubble-like cabin sits far back on the chassis, just ahead of the rear wheels, resulting in an aggressively long nose with a sculpted hood and a retro-style dropped-down grille, which sits low to the ground. HID headlights with dark-tinted surrounds and LED daytime running lights, as well as red brake calipers, provide a distinctive look. The vertical headlights hover just above the large squarish front air intakes, and the scalloped sides feature large air intakes as well. The wheel wells rise high into the body to make room for big 19-inch staggered-width exotic forged-alloy wheels in the front and 20-inch wheels in the back. The rear end displays a clean design, with vertical LED taillights and dual exhaust pipes. An active rear wing spoiler, integrated into the trunk lid, rises automatically at 72 mph to improve downforce. It lowers when the speed drops below 50 mph.

Adding to its exclusivity, the SLS-Class's body, as well as its engine, is almost entirely made and assembled by hand. Mercedes notes that aluminum makes up all but 4 percent of the body, with the remainder being the high-strength steel windshield frame and pillars. More than 1,300 body parts are assembled primarily by hand in a process that takes about 30 hours. A racing-inspired AMG Adaptive Performance Suspension with a double-wishbone configuration at all 4 wheels comes standard on the SLS-Class. It's designed to reduce body roll, pitch and dive while ensuring optimal agility and handling. An AMG compound braking system does a good job of dissipating heat while stopping the vehicle at high speeds, and it remains effective at lower around-town speeds as well, with minimal grabbing. Direct-ratio speed-sensitive steering provides good balance and an ideal weight, which feels slightly heavy at times, testers note.

Under the hood, Mercedes drops a handcrafted AMG-designed naturally aspirated 6.3-liter V8 engine, which puts out 583 hp and 479 lb-ft of torque at 4,750 rpm. That's a boost of 20 hp over the previous year, but testers say it barely registers when output levels are that high. Still, it's enough to drive the SLS-Class from 0-60 in just 3.6 seconds. Top speed is limited to 197 mph. The V8 mates to a track-tested 7-speed AMG SpeedShift DCT dual-clutch transmission with a manual-shift mode and steering-wheel-mounted aluminum paddle shifters. The transmission also features Controlled Efficiency, Sport and Sport+ modes, which deliver quicker shifts and sportier performance. In addition, Mercedes includes a driver-activated Race Start function, which provides improved acceleration from a standstill using startup revs and enhanced traction. Fuel economy numbers top out at 19 mpg on the highway.

For 2014, Mercedes adds a Black Series package, which features a number of performance and design upgrades, including revised valve timing and a boost in cylinder pressure. Together, the enhancements push output to 622 hp. The package also includes a carbon fiber hood and drive shaft, as well as a revamped suspension with electronically adjustable adaptive dampers and a new titanium exhaust system. The improvements shave 154 pounds off the SLS-Class's weight, and its 0-60 time drops to 3.5 seconds. Exterior upgrades include larger front air intakes, black matte black forged alloy wheels, a front splitter and a rear diffuser.

The SLS-Class's rear-wheel-drive chassis, suspension and powerplant work together to create a visceral yet highly controlled driving experience. The SLS-Class can be a beast when it wants to, but never feels like it's about to get away from the driver. It always feels firmly planted, though maneuvering with the long nose out front can take a little getting used to, according to test-drivers. But the underpinnings do a good job of leveling out road surfaces and provide a firm ride without punishing passengers, while the big V8 moves the vehicle along at an incredibly fast clip, resulting in a true sports-car experience.

The AMG GT Roadster receives a few unique features, such as specific seats with integrated Airscarf neck-level heating and cooling vents, which keep passengers comfortable when the top is down. The system offers individual 3-stage temperature controls, and airflow automatically adjusts depending on the vehicle's speed. The Roadster also comes with unique hand-fitted soft leather upholstery with red stitching and available Alcantara inserts.

Like all Mercedes-Benz vehicles, the SLS-Class receives a full range of safety features, including 8 airbags, electronic stability control and antilock brakes with brake assist. A rear-view camera, Parktronic parking assist and blind-spot alert system are among the other standard safety features.

Although the SLS-Class travels in rarefied space, it does compete against a few performance-oriented 2-door vehicles, including the Aston Martin DB9 and the Jaguar F-Type, as well as exotics like the Lamborghini Aventador and the Ferrari 458 Italia.

What's your take on the 2014 Mercedes-Benz SLS-Class?

Have you driven a 2014 Mercedes-Benz SLS-Class?
Rank This Car