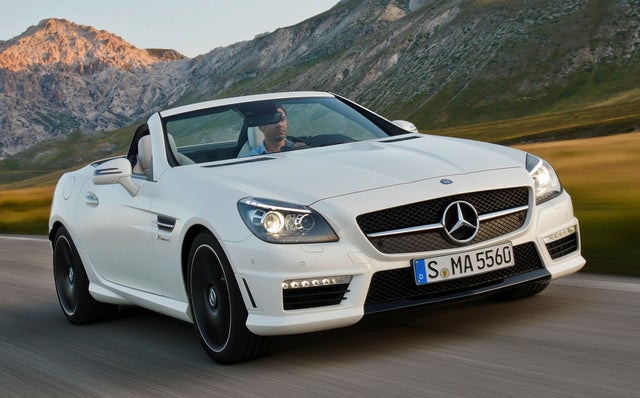 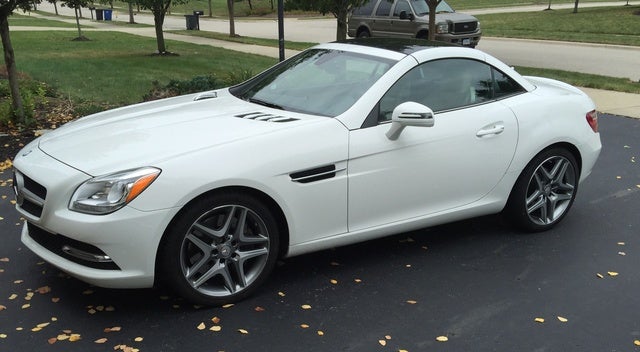 Available in SLK250, SLK350 and SLK55 AMG trim levels, the SLK-Class roadster received a third-generation makeover in 2011, which puts it 3 years into its current design. When it launched in 1998, the SLK-Class was one of the first compact roadsters with a 3-piece retractable hardtop. Competitors include the Mitsubishi 3000GT Spyder, the Porsche Boxster, the BMW Z4 and the Lexus SC. While it's not the sportiest of the bunch, the SLK-Class provides a good combination of sport-oriented performance, muscular good looks and a comfortable, upscale interior.

However, the SLK-Class's biggest calling card remains its retractable Panorama roof and double-jointed trunk lid, which work together to transform the SLK from a coupe into a convertible in less than 20 seconds. At the touch of a button, the Panorama roof, which features a heat-reflecting see-through panel of tinted polycarbonate, splits and folds as it lowers, while the rear window pivots and the trunk lid raises to accommodate the roof. Once inside, the roof assembly pivots again and positions itself to conserve more than 60 percent of rear cargo space, which checks in at 10 cubic feet when the roof is up. Owners can opt for an available Magic Sky Control roof, which uses particles inside the glass overhead panel to block light and reduce heat entering the cabin at the touch of a button.

Outside, the SLK-Class displays a sculpted shape and numerous sporty design cues, starting up front with a long aggressive nose and 3-pointed star centrally located in the distinctive chrome grille. The sporty look continues with front air intakes and bright white LED daytime running lights, as well as a low cabin profile and rising shoulder line at the rear wheel wells. Heated power side mirrors with power fold-in are included on the SLK250, while the SLK350 gets auto-dimming side mirrors. For a more performance-oriented look, owners can add an available Sport Package with sport body styling, which includes a deep front air dam with mesh intakes, as well as side sills and a rear valance. HID headlights with Active Curve illumination and a rear spoiler are among the other exterior options. The SLK55 AMG receives a number of unique exterior features, including dark-tinted headlamps, a deep front apron with air intakes, side fender vents, a rear spoiler and twin AMG tailpipes.

Three different engines power the different SLK-Class trims. A turbocharged 1.8-liter 4-cylinder engine with direct injection drives the SLK250. It puts out 201 hp and 229 lb-ft of torque, and drives the roadster from 0–60 in 6.5 seconds. The engine mates to a either a short-throw 6-speed manual transmission, which comes standard, or a 7-speed automatic with a manual shift mode and paddle shifters. Fuel economy numbers check in at 22 mpg city/32 highway with the manual shifter and 23/33 with the automatic.

The SLK350 continues to receive a 3.5-liter V6 engine delivering 302 hp and 273 lb-ft of torque. It links to the 7-speed automatic and jumps out from 0–60 in 5.4 seconds. The V6 posts fuel economy numbers of 21/29 mpg. At the top of the heap, the SLK55 AMG gets a handbuilt 5.5-liter AMG V8, which generates 415 hp and 398 lb-ft of torque at 4,500 rpm. It mates to a 7-speed AMG SpeedShift transmission with a manual-shift mode and drives the vehicle from 0–60 in 4.5 seconds. The SLK55 AMG also gets an engine start/stop system, which shuts off the engine at stoplights or when idling to conserve fuel. Fuel economy numbers dip to 19/28. All three engines require premium fuel.

The SLK-Class rides on a rear-wheel-drive platform with a number of chassis and suspension enhancements at the SLK55 AMG level. The standard sport suspension on all three trims features a lowered ride height and firmly tuned coil springs and shock absorbers, providing an aggressive stance and precise handling. Multilink suspension configurations come standard at all four corners, with 3-arm multilinks in the front and 5-arm multilinks in the rear. Rack-and-pinion speed-sensitive steering with power assist and direct-steer also comes standard. The SLK55 AMG receives a number of upgrades, including an AMG sport suspension with stiffer springs, shock absorbers and stabilizer bars. In addition, an adaptive braking system comes standard on the lower-end trims, while the SLK55 AMG receives a vectoring torque brake system, which automatically applies the brake to the inside rear wheel in tight turns to keep the vehicle firmly planted. Finally, Mercedes equips the SLK55 AMG with an AMG sport exhaust sytem. The SLK250 rides on 17-inch alloy wheels, while the SLK350 and SLK55 AMG both get 18-inch staggered-width alloy wheels.

Naturally, most reviewers recommend the SLK55 AMG, with its more powerful engine and upgraded suspension, especially for buyers who are looking for a performance-oriented vehicle. The other SLK-Class trims deliver a good balance of performance and handling, but don't match the best in the class, like the Porsche Boxster and the BMW Z4. Some reviewers recommend the manual shifter for buyers who want to improve the performance of the lower-end trim, while others say the paddle shifters for the automatic transmission aren't as responsive as they should be. On the plus side, the SLK-Class manages to strike a good balance between sharp handling and a comfortable ride.

Inside, the SLK-Class gets good marks for its overall fit and finish, as well as the quality of its materials. Some reviewers find the cabin a bit tight, while others say it offers adequate room. The contoured front sport seats are comfortable and supportive, with 8-way power adjustment and memory settings. MB-Tex upholstery comes standard in the SKL250, while the SLK350 upgrades to leather upholstery and heated seats. In addition, the SLK350 gets the automaker's Airscarf system, which includes neck-level heating and cooling vent built right into the seatbacks. Other standard features for the SLK250 include a 4-way power steering column, the COMAND system central controller, a 5.8-inch color display screen, Bluetooth, remote keyless entry and an 8-speaker audio system with HD radio and a USB port, while the SLK350 also includes an auto-dimming rear-view mirror and a Harman Kardon Surround Sound audio system with SiriusXM satellite radio. The SLK55 AMG receives a number of unique features, including AMG Nappa leather upholstery with contrast stitching, brushed aluminum pedals, aluminum interior trim and Solar Red ambient lighting.

What's your take on the 2014 Mercedes-Benz SLK-Class?

Users ranked 2014 Mercedes-Benz SLK-Class against other cars which they drove/owned. Each ranking was based on 9 categories. Here is the summary of top rankings.

Have you driven a 2014 Mercedes-Benz SLK-Class?
Rank This Car

Can Leaving Dash Cam Plugged In To Cigarette Lighter Cause My Mercedes Slk ...