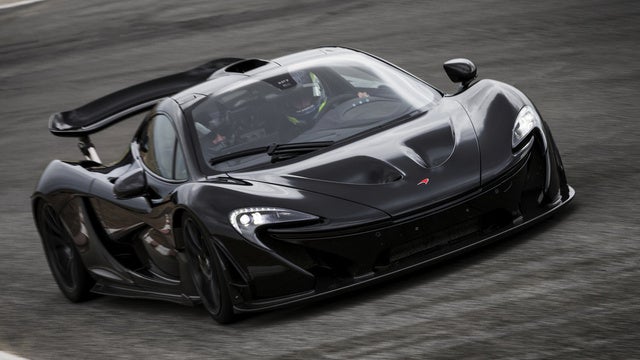 Looking for a Used P1 in your area?

CarGurus has 5 nationwide P1 listings and the tools to find you a great deal.

In many ways the McLaren P1 looks like something straight out of a science-fiction movie, which shouldn't be totally surprising, since its entire design relied on the science of aerodynamics, and many of its mechanical systems are based on the science behind Formula 1 cars. With its endlessly swooping lines, carved-out air intakes, winglike dihedral doors, large hood nostrils, central roof snorkel and one-of-a-kind glass canopy, not to mention its massive active rear wing, the P1 resembles nothing else on the road today. From British automaker and Formula 1 fixture McLaren, it's a truly unique road-shredding supercar (some are calling it a hypercar), made even more special by its very limited production number of just 375 units.

Designed in a wind tunnel to take every advantage of aerodynamics, the P1 excels at directing air around its carbon-fiber skin, pulling in cold air where needed to cool the engine and ensure optimal downforce and stability at higher speeds, and shedding warmed air from the engine compartment in the most efficient way possible. Every exterior design element of the P1 has a purpose, including the front air scoops, the boomerang shape of the headlights, the two "nostril" intakes in the hood, the sculpted doors, the high rounded shoulders and the totally funky rear end with a single large centrally located exhaust pipe, swooping rear LED taillights and a black mesh rear screen.

What's more, many of the aerodynamic elements operate in different ways at different speeds. McLaren identifies four different speed ranges for the vehicle, with different configurations for each range. For instance, at 18-43 mph (30-70 kph), or urban/city speeds, all active aerodynamic technology disengages, resulting in a smooth ride and balanced handling. At "Alpine" speeds of 43-56 mpg (70-90 kph), the active rear diffuser works with the vehicle's smooth underbody to generate suction, keeping the vehicle firmly planted on twisty roads. At highway speeds of 56 mph and higher, drivers can select a Race mode to lower the vehicle's ride height, while front flaps deploy and the double-element rear wing alters its height and angle depending on the speed to reduce drag and ensure appropriate downforce. And at track speeds of up to 150 mph (240 kph), the rear wing fully extends, and the lowered ride height aids the front splitter and diffuser in reducing air turbulence under the vehicle and along its sides. Drivers who prefer a ride unhindered by the control of the rear wing can use a steering-wheel-mounted Drag Reduction System (DRS) button, which deactivates the rear wing.

All well and good, but what about its stats? A supercar of this caliber must have mind-blowing numbers, and it does, like 903 hp, a 0-62 time of 2.8 seconds and a top speed of 217 mph. The P1 also hits a speed of 186 mph in just 16.5 seconds, making it one of the quickest road cars ever produced. That's probably more power and acceleration than you'll need to run down to the grocery store for milk and bread, but it puts the P1 in rarefied space with competitors like the Bugatti Veyron and the Aston Martin One-77, as well as the new Lamborghini Veneno and Ferrari LeFerrari. Of course, the P1 also has a mind-blowing price tag of over $1 million, and with many buyers customizing the vehicles, the final costs are averaging even higher.

Lest you think that with that kind of power, the P1 gulps gallons of gas, practically requiring its own pump, think again. The P1 comes equipped with a hybrid powerplant consisting of a twin-turbocharged 3.8-liter V8 gas engine, an electric motor and a lithium-ion battery pack. McLaren uses the same basic V8 engine powering its 2-passenger MP4-12C supercar, but for the P1 it pumps up horsepower to 727, compared to the 12C's 592. When combined with the electric motor, which produces 176 hp, the hybrid powerplant generates an impressive 903 hp and 664 lb-ft of peak torque. All that power and torque are delivered to the rear wheels through a 7-speed dual-clutch automatic transmission with a manual-shift mode and steering-wheel-mounted paddle shifters.

The P1 can travel for short distances of up to about 6 miles on electric power alone at speeds up to 30 mph, which helps to conserve fuel around town. Drivers can also turn off the gas engine at speeds as high as 100 mph, and the electric motor will maintain the P1's speed for a short period of time. In hybrid mode, the electric motor aids the V8 during acceleration, helps smooth out turbo lag and provides extra power at higher speeds when drivers press an Instant Power Assist System (IPAS) Boost button located on the steering wheel. The boost in power from the electric motor can last up to 20 minutes, depending on the battery charge.

In addition, the electric motor reduces CO2 emissions, making the P1 more eco-friendly than many of its competitors. Although full fuel economy numbers aren't yet available, McLaren claims a combined city/highway average of 34 mpg. The engine charges the battery during deceleration or at a stop when the driver removes his foot from the pedal. Drivers can also engage the V8 engine to charge the battery, or equip the P1 with a plug-in charging system, which fully charges the battery in about 2 hours or gives it a quick charge in about 10 minutes. The P1 does not include regenerative braking, as that would interfere with the performance of the vehicle's big carbon ceramic disc brakes, according to McLaren.

Like the MP4-12C, the P1 features a midengine design, with the V8 positioned behind the passenger cabin and in front of the rear axle, resulting in a low center of gravity and good overall balance. In addition, the midengine placement provides better handling and more responsiveness in turns. The P1 also borrows the 12C's one-piece carbon-fiber MonoCell chassis and suspension, and builds on the 12C's ProActive Chassis Control system with a new RaceActive Chassis Control system. Like in the 12C, the system uses hydraulically operated and interconnected dampers to deliver a smooth, comfortable ride around town and a stiffer ride with reduced body roll at higher speeds. The system also adjusts ride height at higher speeds. A Brake Steer system, borrowed from McLaren's F1 cars, applies brakes to the inside rear wheel when entering corners too fast to help the driver maintain control of the vehicle. The steering system features an electric hydraulic design. The P1 rides on 19-inch forged aluminum wheels in the front and 20-inch wheels in the rear with Pirelli tires.

The cabin of the P1 builds on the interior of the 12C somewhat, but still remains fairly spartan in an effort to keep weight down. Carpeting, for instance, does not come standard but can be added as an option. The thin carbon-fiber sport seats keep the driver firmly in place during aggressive maneuvers, and controls and buttons are close at hand, either on the steering wheel or within easy reach. Owners can add race or custom seats with harnesses as an option. Exposed carbon fiber panels and Alcantara trim, along with the thick sport steering wheel, add a sporty, functional feel. In place of a shift lever, drivers use push buttons in the central console or the paddle shifters to select gears. Push-button start also comes standard. The central console includes a vertical touchscreen, looking much like a large iPhone or table, which drivers can use to access the navigation, entertainment and climate control systems, as well as the transmission/suspension settings.

During an early test drive of the P1, Jay Leno called the P1 "one of the first truly modern cars of the 21st century," due in part to the P1's hybrid powerplant and its low emissions, and the best-handling car he's ever driven. He also notes that the P1 can probably travel a lot faster than its performance-limiting features allow, and has tremendous grip in tight turns at high speeds. Various drive modes, including Normal, Sport, Race and Track, tune engine and suspension specifics for quicker, sportier rides, which can take the car to its limits. But the P1 never gets away from the driver and always keeps its grip and balance.

Looking for a Used P1 in your area?

CarGurus has 5 nationwide P1 listings and the tools to find you a great deal.

On The Readout For What Gear The Car Is In There Is A M Or A V Next To The ...