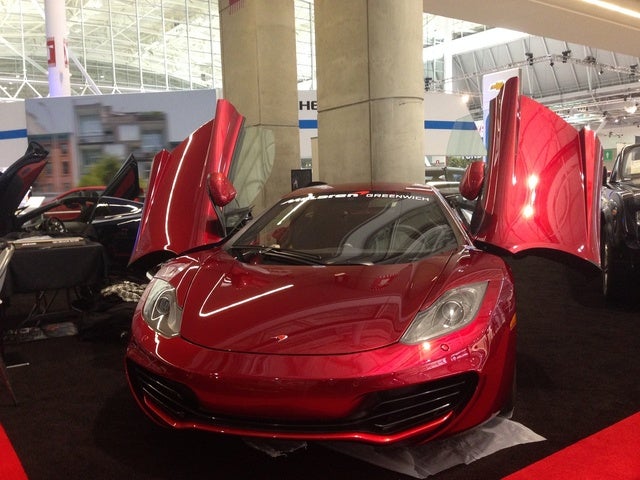 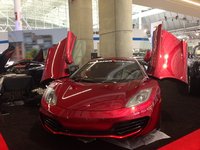 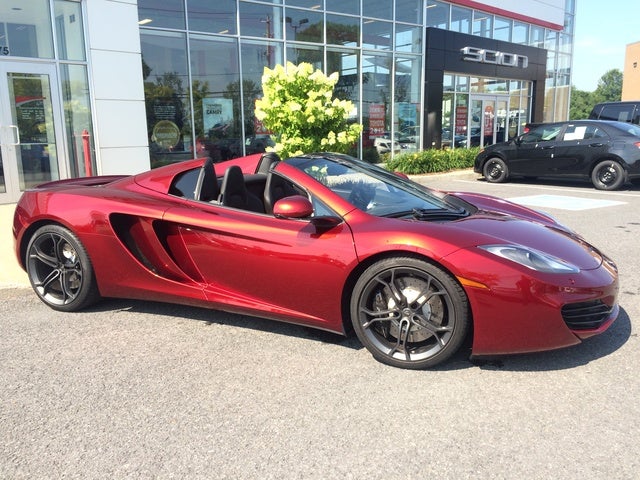 British automaker and Formula 1 fixture McLaren may not be as well-known around the world as Ferrari or Lamborghini, but its supercars run with the best in its high-end street-racer class, matching its Italian competitors in speed, design, handling and technology. In fact, McLaren's 50-year Formula 1 heritage heavily influenced the design of the 2-passenger MP4-12C, from its MonoCell carbon-fiber chassis to its similar weight-saving engine, cooling radiators, exhaust pipes, brakes, steering column and airbags. Add in wing-like dihedral doors, which open up and out on a single hinge, its Active Airbrake self-deploying rear spoiler located on the trunk and its racetrack-inspired midengine design, and the 12C has plenty to offer discerning buyers.

In honor of its 50th anniversary in September 2013, McLaren unveiled limited-series versions of both its sport coupe and convertible (Spider) trims, which featured unique carbon-fiber front bumpers and air intakes, unique staggered-width wheels (19 inches in the front, 20 inches in the back), upgraded interior upholstery, interior carbon-fiber trim and 3 exclusive colors, including Carbon Black, Supernova Silver and McLaren Orange. Available in only 50 versions each, the anniversary series might be difficult to find globally, but the standard 12C offers the same levels of performance and handling, although with no new updates for 2014, its third year in production.

Power for the 12C continues to come from a compact and lightweight 3.8-liter twin-turbo M838T V8 engine, which pumps out 592 hp at 7,000 rpm and 445 lb-ft of torque at 3,000 rpm. That's enough to drive the 12C from 0 to 60 in about 3 seconds, and through a quarter-mile in just under 11 seconds. Speed tops out at 205 mph. The turbocharged V8 powers the rear wheels through a dual-clutch, 7-speed SSG transmission with 3 drive/handling settings, including Normal, Sport and Track modes. There's no shift knob on the center console nor a clutch pedal, as drivers engage the engine using Formula-1-inspired rocker shift paddles located on the steering wheel, although the transmission auto-shifts as well. When unleashed, the V8 drives the 12C forward smoothly through its paces, with no turbo lag and a satisfying exhaust note expected from a supercar of this caliber. Combined fuel economy checks in at 24.2 mpg. McLaren does not offer the 12C with a straight manual transmission.

The 12C's midengine design places the V8 behind the passenger cockpit and in front of the rear axle, resulting in good overall balance and a lower center of gravity. In addition, it provides better handling and more responsiveness in turns. Although a number of competitive vehicles, like the Ferrari 458 Italia, use a similar design, McLaren notes it was the first race-car company to place the engine behind the driver and between the axles on a street car, making it one of the 12C's many innovations.

In fact, McLaren uses the word "innovation" a lot to describe features of the 12C, like its carbon-fiber MonoCell chassis and wing-like doors. The hollow one-piece MonoCell chassis keeps weight down and doubles as a safety cell for the driver and passenger, which also helps keep costs down. Easier to repair than a typical chassis, the MonoCell provides high rigidity and won't degrade like a metal frame. However, metal framework extends forward and rearward from the MonoCell, providing support for the sleek bodywork. The 12C's low front end channels air up and over the vehicle, helping to create downforce, while a front air splitter and rear diffuser direct air along the car's underbody. Pronounced side vents channel cooling air to the engine compartment, while the unique Air Brake panel automatically deploys from the tail when needed to keep the rear end firmly planted. In addition, it helps to reduce braking distance by up to 65 feet, according to the automaker. Add in the unique dihedral scissors-like doors, and the 12C makes a distinctive visual statement.

A low-slung cabin, high sideline and hunky rear end give the 12C an aggressive sporty appearance. The engine itself is visible through the glass cover on the rear deck, and dual exhaust pipes emerge high on the rear end, just below the airbrake. HID headlights with LED running lights and LED taillights are among the standard exterior features, along with a variety of lightweight wheel designs, including super lightweight forged wheels. The convertible gets a 2-piece retractable hardtop, which folds into a compartment behind the seats but in front of the engine in 17 seconds. It can be raised or lowered at speeds up to 19 mph.

Inside, McLaren puts the driver as close to the center of the vehicle as possible, which leaves wide lips at the doors. The design also results in a narrow center console, which contains controls for push-button start, the entertainment system and transmission/suspension settings, as well as a tall, narrow 7-inch touchscreen similar to a mobile phone's screen. Unlike some competitors such as the 458 Italia, McLaren leaves the racing-inspired steering wheel completely devoid of controls or switches, resulting in a simple efficient appearance. Secondary controls and switches are located to either side of the driver, while climate controls are located on each door. All are designed to be within easy reach of the driver and passenger. Owners can customize the interior with a variety of leather and Alcantara upholstery options, as well as carbon-fiber trim. Owners can add navigation as well as an upgraded 7-speaker Meridian audio system.

Underneath, the suspension includes a ProActive Chassis Control system with Adaptive Damping, which features hydraulically operated and interconnected dampers. During aggressive maneuvers and heavy cornering, the driver can use the system to add stiffness and reduce body roll, while the system can be disengaged during normal driving conditions to reduce stiffness and ride harshness. The car's mechanicals also include Brake Steer, a feature borrowed from the F1 circuit. Replacing a differential, it works with the electronic stability control (ESC) system, applying brakes to the inside rear wheel during tight cornering to reduce wheel spin and understeer. Drivers can manage the ESC system itself using the on-board Active Dynamics Panel, located on the center console. Automatic, Launch Control and Winter driving modes give the driver the ability to adjust road grip and change the electronic ride, handling and transmission characteristics if the roads turn wet or slippery. In addition, the driver can shut off ESC, allowing the car to perform in true sports-car fashion.