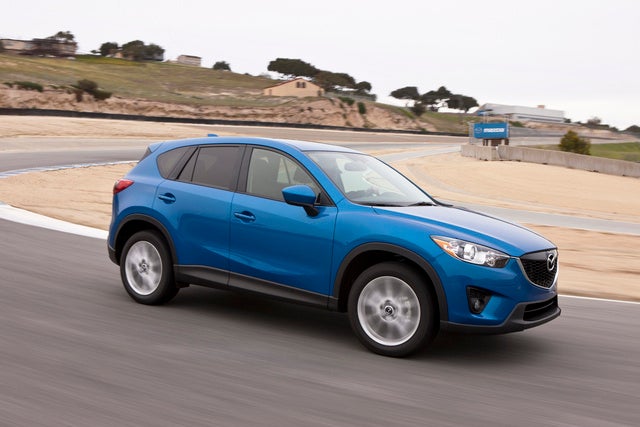 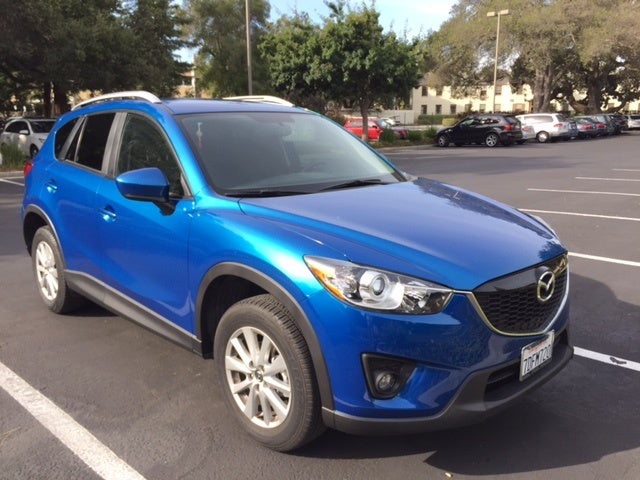 Mazda's compact crossover SUV zooms into its second year addressing driver concerns with a new, bigger engine for all but the base Sport and a few new features available across the board. Most notably, the 2014 CX-5 offers Smart City Brake Support to alert drivers of obstacles in their path and even applies the brakes at low speeds if the alerts are ignored long enough to get too close for the system's comfort. HD Radio and Pandora streaming support also make their way onto the options list across the board, and alongside the Smart City Brake Support system become standard inclusions as you move up the trim ladder toward the top-shelf Grand Touring trim.

In all, if the CX-5 wasn't at the top of your list for its debut, it should be now. Although 9.7 seconds to 60 mph is basically the norm in its class, drivers still felt the original 2-liter 4-cylinder engine was just a little too weak for things like hilly back-country roads. The new 2.5-liter 4-cylinder puts out an extra 30 hp and 30 lb-ft of torque over the original 2-liter, but it is only in the midlevel Touring and top-shelf Grand Touring editions. The smaller 2-liter carries over for the base Sport, so if you have no such qualms about hilly roads, the manual transmission with this engine still fetches best-in-class fuel economy. That said, the new 2.5-liter engine is only about 1 mpg worse, but it doesn't offer a manual transmission.

Available with front-wheel drive (FWD) or all-wheel drive (AWD) across the entire lineup, the CX-5 is quickly becoming a prime choice for 5-passenger compacts given Mazda's incremental tweaks for 2014—not that it wasn't already a favorite at debut, if the sheer number of 5-star driver reviews are any indication. The now nearly flat cargo area, thanks to a little seating shift, offers more than 65 cubic feet for cargo with its 60/40 or 40/20/40 split-folding rear bench completely dropped or a still very-impressive 35.1 cubic feet behind the second row otherwise. Additional insulation should cut back on road-noise complaints, but some drivers might still find the remaining highway song less than pleasing. So far, however, drivers are much more interested in this little ute's fun factor and massive value.

Sure, the CX-5's little 155-hp-and-150-lb-ft/torque 2-liter takes some 9.5 seconds to get to 60 mph with the automatic transmission (easily bested by the Honda CR-V's 9 seconds and the Toyota RAV4's 8.4), but those engines won't get you the class's best 26 mpg city/35 highway fuel economy with the manual and AWD. The as-yet-untested 2.5-liter engine should be much more competitive, reportedly putting out 184 hp and 185 lb-ft of torque while sipping regular fuel at a rate of 25/32 with FWD and 24/30 with AWD, all directed by the same 6-speed automatic without the option of the 2-liter's 6-speed manual. The 2-liter otherwise fetches very similar economy, rating 26/32 as a FWD automatic or 25/31 as an AWD automatic.

Being an affordable compact crossover with excellent cabin materials, standard features aren't really the CX-5's shining point, but it does come well-equipped nevertheless. The base Sport, for instance, notably offers keyless entry, cruise control, a tilt-and-telescoping steering wheel, air conditioning and a 4-speaker stereo system complete with a CD player, an auxiliary jack and USB interface. Moving up to the Touring will fetch features like a rear-view camera, blind-spot warning system, leather-wrapped steering wheel and 2 more speakers, but at the top of the line you can expect automated headlights, wipers, dual-zone climate control and all the leather upholstery and heated-mirror-type accessories that usually accompany such features. Some of the tech isn't as well-executed as it could be—like the smaller touchscreen with TomTom navigation—but as mentioned before, drivers are far more concerned about the all-important fun in their function and make almost no mention of things magazine reviewers are so quick to judge.

Users ranked 2014 Mazda CX-5 against other cars which they drove/owned. Each ranking was based on 9 categories. Here is the summary of top rankings.

Having the same issue. Turn the car off--but it does not turn off. (not putting your foot on the brake and turning it off does not work) Please report this to Mazda so they will address the issue....

I tried starting the car and it just wont start. Jump start also didnt help, so its not a battery issue (battery is 1 year old). I believe it may be an alternator or starter issue. Any thoughts? Wha...

How Often Should Rear Differential Fluid Be Changed?

Hi, I have a 2014 Mazda cx-5, I drove from NB to Ontario and a few days after I couldn't start it, the lights inside were working the locking and unlocking too then little by little they started to...

715 views with 4 answers (last answer about a year ago)

Anyone know if Mazda is doing a recall on this defective sensor? I spend over 700$ last December to switch battery (thinking this was the problem as car wouldn’t start), then replace an electroni...

101 views with 2 answers (last answer about a year ago)