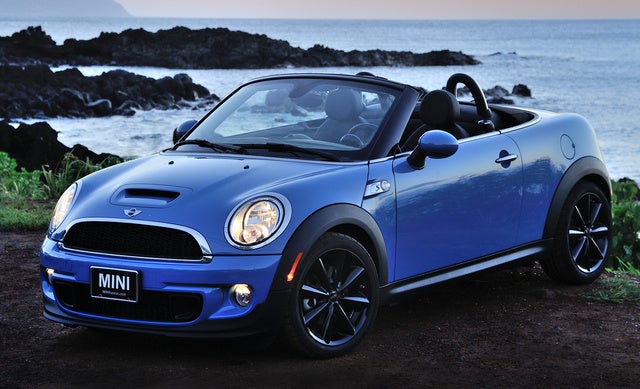 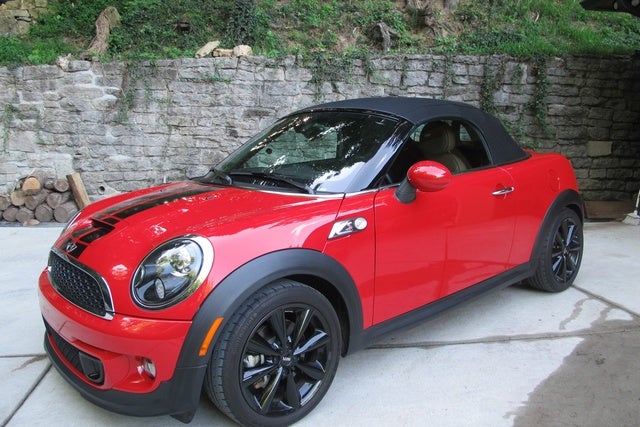 Like every other MINI for 2014, the 2-seat Roadster gains a new option package. Unlike all MINIs but the Coupe, that's the entire list of changes this year—and they're both destined for a total redesign in short order. Sure, drivers absolutely adore both these compacts, but not as much as any other MINI. The Coupe and Roadster both just can't compete on the company's sales charts and, in the case of the Roadster at least, for one good reason: refinement.

The Cooper exists to serve exacting tastes with an all-out hunger for fun and style, and these exacting tastes find much to get picky about in the Roadster year after year. Quite frankly, the Roadster just isn't what most drivers expect out of a premium drop-top. Poor outward visibility with the top up means its optional rear parking sensors are more a necessary added cost, and its single-layer fabric top now gets loud criticism from professional reviewers and drivers alike.

Those factors combined with having the same engine in every other current Cooper means the Roadster gets less attention for going topless, rather than more. Relatively speaking, the Roadster is still just as powerful and fun to drive as any other sun-loving compact, but MINI drivers have come to expect a certain level of performance exclusivity that the Roadster loses, compared to other MINIs, by hefting around the automatic roll bars and body reinforcement necessary to let the top down.

For this reason MINI is planning an all-new sporting drop-top architecture to debut probably as soon as the next model year, which would be the usual timing for a redesign on this new-for-2012 nameplate anyway. Spy shots indicate the first MINI to roll out on any new architecture might be the Countryman, but all the indicators are here now for a Roadster replacement sooner rather than later, namely that new option package as the only change this year and the maker's total silence on any future Roadster.

The new City Package offers an alarm system, power folding mirrors, heated mirrors, heated washer jets, auto-dimming mirrors all around, rear parking sensors and a proximity key with push-button start. Essentially it replaces the Premium 1 package with a bit of a discount in terms of both price and inclusions. You can get what the City Package excludes from the former setup in the new Premium pack, which picks up the automatic climate control, automated headlights and automatic wipers previously included in Premium 1 while also stuffing in a panoramic sunroof.

Otherwise the front-wheel-drive 2014 MINI Roadster is unchanged from 2013. You still get 121 hp and 114 lb-ft of torque from an engine that gets 27 mpg city/35 highway in the Base, for 8.7 seconds to 60 mph with its 6-speed manual or 10 seconds to the same with the 6-speed shiftable automatic (both of which are available for any Roadster, with the automatic predictably a couple of tenths of a second behind the manual).

Moving up to the turbocharged S nets 181 hp and 177 lb-ft of torque with the very same 1.6-liter 4-cylinder block, excepting that turbo exhaust mod, which gets it to 60 mph in less than 7 seconds while getting 1 fewer mpg in the city. Going all-out with the all-wheel-drive John Cooper Works fetches 208 ponies and 192 lb-ft/torque for less than 6.5 seconds to highway speeds and the same fuel economy estimates as the S.

Users ranked 2014 MINI Roadster against other cars which they drove/owned. Each ranking was based on 9 categories. Here is the summary of top rankings.

Have you driven a 2014 MINI Roadster?
Rank This Car

I Have A 2014 Mini Cooper Convertible. What Is The Best Way To Clean The To...

What Is The Difference Between A Mini Roadster Base, Mini John Cooper, Mini...