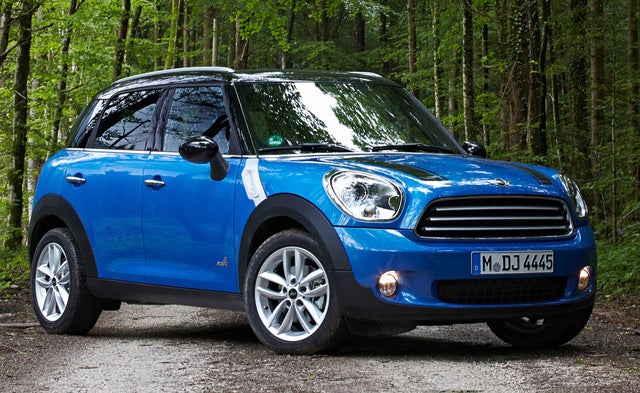 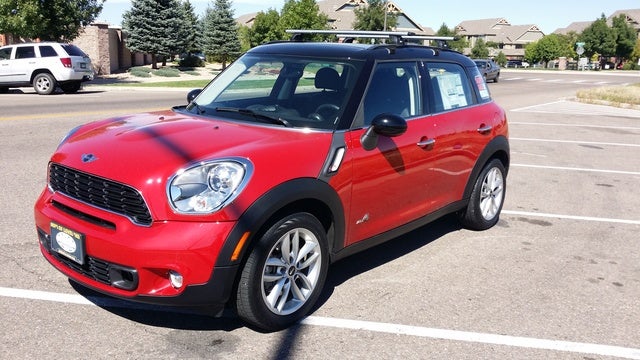 Launched for 2011, MINI's largest and most comfortable ride was due for a touch-up this year—and it sure got one. Now differentiating itself from its similarly compact brothers with 5 seats instead of just 4 plus 16.5 cubic feet for cargo in the hatch with those seats in-use—or an amazing 41.3 cubes with the new rear bench folded down—this Countryman is easily the most fashionable way to get just about anything done.

That's especially true with all-wheel drive available for the mid-level S in addition to the usual ALL4 setup in every John Cooper Works, although MINI doesn't plan to bring the new Base Cooper with an ALL4 setup Stateside. When it was originally introduced just 3 years ago, the Countryman had only 4 seats with a neat center rail housing cupholders that slid back and forth, but a change in guidelines led to the current design changes, allowing MINI to remove the dividing rail between the back two seats and drop in a relatively roomy bench for 3.

The price changes a bit this year, going up $100, but with that price increase MINI includes heated mirrors and washers standard alongside new features like a 12-volt charging station in the cupholders (now expectedly in the armrest) and a padded armrest for the rear doors. To make the dashing Countryman all the more eye-catching, interior and exterior JWC appearance packages are now available in the base and S Trims.

These changes to the Countryman tweak the interior without sacrificing the fun of the car. Even with the change in seating, the cargo space is still nothing to sneeze at, staying pat at the current figures since its debut. The lone Premium package now offers a lovely dual-pane panoramic sunroof, rain sensors, an automatic headlight control and automatic climate control, which covers the gaps left by MINI's new City Package with an alarm system, power folding mirrors, heated mirrors, washer jets, auto-dimming rear-view mirrors, both interior and exterior, rear park distance control and "comfort access" (push-button start and keyless entry).

The Countryman offers four different trims to suit different tastes and bank accounts. All models have a 4-cylinder 1.6-liter engine, but the further up the ladder you go nets additional turbocharged tweaks. Starting with the Base, its 121 horses paired up to 114 lb-ft of torque is available with the same 6-speed manual or 6-speed automatic offered to every Countryman, and get the car from 0-60 mph in 9.8 seconds with the manual or 10.9 with the automatic. This naturally aspirated engine cruises to the tune of 27 mpg city/35 highway on a stick, or 25/30 with the automatic. The Base is available only with front-wheel drive (FWD) and recommends premium fuel.

Things shift dramatically with the S model, increasing horsepower by 60 ponies with 67 lb-ft of additional torque for that turbo boost. This added power changes the mileage and 0-60 times to 26/32 for the manual and 25/32 for the automatic, and 7.0 seconds and 7.8 seconds respectively, but the S is also available in ALL4 form instead of purely FWD. Getting all 4 wheels to grip the road will cost a couple milliseconds and about 1 highway mpg, however.

The all-wheel-drive John Cooper Works is definitely the belle of the ball here, using the same 4-cyinder turbo engine as the rest, but wearing it in a totally different manner. The JCW tears up the track with a 0-60 time of 6.0 seconds, using the revised turbo to give it increased horsepower of 208 and 192 lb-ft of torque. The increased power manages to not drastically affect the mileage of this model, 23/30 with the automatic and 25/30 with the manual.

What's your take on the 2014 MINI Countryman?

Kira There are always lights going off on my dashboard. It took me forever to find the light that was not working. Then at one point it kept telling me that my door was open when it was clearly closed. I never figured out what was the cause. The car just stopped giving me that alert. Now it constantly beeps on and off about the passenger airbag. It does matter if you are driving, staying still, empty seat, full seat, buckled, or not; it will beep at you whenever it feels like it. I DO NOT recommend this car or any MINI to anyone.

Have you driven a 2014 MINI Countryman?
Rank This Car

Anyone With Reliability Issues On A 2014 Mini Cooper Countryman?

I hear a lot of people complaining about 2014 and older mini coopers, looking for those with MAJOR problems 2014+

What Type Of Gasoline Does S Mini Cooper Countryman Require

I changed out the spark plugs, oil filter housing because it was leaking coolant. And then the left right axel boot. Now..engine light comes and power is zilch. Now the the valve cover is lea...

Why Tailgate Icon Appear On Dashboard?

I have a 2014 Mini Countryman S. I was told that timing belt jump and lost compression. Bent valves and pretty much the engine is shot. Repair guys quoted me 7.5K-8K for engine rebuild. Is it too much