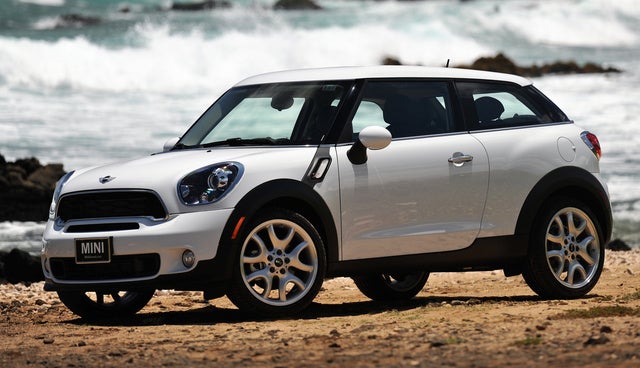 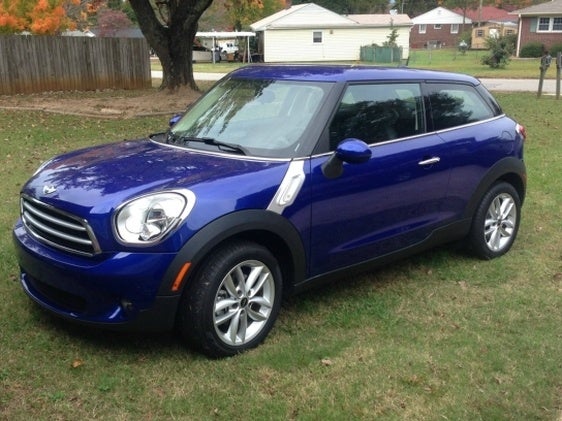 The folks at MINI, once so veddy British, have jumped on the overkill bandwagon in taking advantage of cool. The 2014 MINI Cooper Paceman, described as a subcompact 4-passenger hatchback/crossover with a little bit of quirkiness, a little bit of attitude and a lot of pizzazz, is the latest example of this now-universal phenomena, perhaps one result of MINI coming under the auspices of BMW.

Anyhow, the latest MINI Paceman iteration, introduced in 2013, boasts four trims, the power-starved Base, the turbocharged S, the all-wheel-drive-toting (AWD) S ALL4 and the souped-up John Cooper Works (JCW). Trims differ mainly in drivetrain configuration, with the former two available only with standard front-wheel drive (FWD), and in performance details, with the S, S ALL4 and JCW each boasting a turbocharged inline 4-cylinder (I4) powerplant that’s even further up-powered in the JCW.

The Base engine, to begin with, is a normally aspirated 1.6-liter I4 that mates with the standard 6-speed manual transmission for 121 hp and 114 lb-ft of torque. Variable valve timing (VVT) means an estimated 27 mpg city/35 highway, while throwing in an available 6-speed shiftable automatic transmission results in the same performance numbers, but mileage drops to 25/30.

The S and S ALL4 carry the turbocharged version of the 1.6-liter I4 that again mates with the standard 6-speed stick shift to put out 181 hp and 177 lb-ft of torque. Once more sporting VVT and again available with the shiftable 6-speed automatic, mileage figures of 26/32 (FWD S with manual transmission) and 25/31 (S ALL4 with manual transmission) are once more expected from the blown 4-banger.

The JCW, in keeping with its self-aggrandizing title, boasts the twin-scroll-turbocharged 1.6-liter I4 with some significant added boost to pound out 208 hp. Managed by the standard 6-speed stick shift, this VVT powerplant throws down 192 lb-ft of torque, with torque blasted up to 207 lb-ft when the booster kicks in on full acceleration. Look for the same mileage numbers as the S ALL4 and, of course, the same 6-speed-automatic option, this time with steering-wheel-mounted paddle shifters added.

The AWD system in the Paceman S ALL4 and JCW editions is the typical full-time variation, allowing for noticeably more agility in cornering, as well as automatic switching of torque from the wheels that slip to the wheels that grip, front and rear, when the snow flies. Also, though the Paceman looks like it would be at home cruising by the Tower of London, its powerplant is boldly Bayerische Motoren Werke AG… known in the U.S. (and Great Britain) as BMW.

Features-wise, look for the Base Paceman to carry 17-inch alloy wheels and a rear spoiler aboard its distinctive profile, while leatherette upholstery, sport front seats and full power accessories adorn the interior. Cruise control and telescoping tilt-wheel steering also return for the 2014 edition, as does a cooled storage bin, Bluetooth hands-free calling and a single-CD player with 6 speakers.

Options, though plentiful, are decidedly restrictive, for the most part, not to mention more than a little expensive, but that’s a big part of what makes this super-customizable import from Merry Olde England so unique. Said available add-ons include a sport-tuned suspension, upgraded and upsized wheels, rear parking sensors, a panoramic power sunroof, auto climate control, heated power-adjustable mirrors and leather upholstery. Additionally, a 480-watt, 10-speaker Harman Kardon audio system can be delivered in the higher trims, as can a navigation suite that can be integrated with the available MINI Connected Interface, featuring a 6.5-inch touchscreen display, enhanced Bluetooth and iPod capabilities and smartphone apps.

What's your take on the 2014 MINI Cooper Paceman?

Guru9N8Y17 I believe the Mini Countyman this is one of the best sport utility vehicles with 4 WD. Visit Deluxe Car Sale in Ludlow, MA. they have the best deal in those cars .

Have you driven a 2014 MINI Cooper Paceman?
Rank This Car

Will a seller deliver the car to me and take my trade in, a Mini Cooper Paceman, after we make a deal?

I Ca Not Verify With Upload A Car For Sale