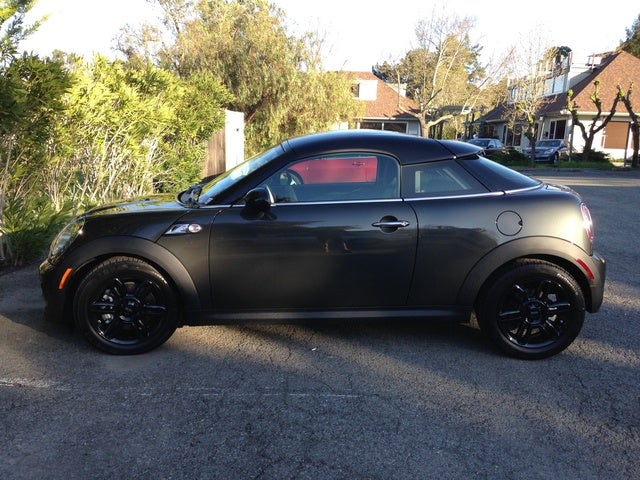 Gaining just the same option-pack changes as every other MINI for 2014, the maker's quickest first-generation Cooper is also slated to be the quickest to hit the chopping block. Although the Cooper Coupe had the pep the Roadster lacked, both suffered from a noisy ride with their single-layer fabric drop-tops. The Coupe added to that a certain wild driving character that just wasn't as appealing to the mainstream as the rest of its MINI brethren.

Sales suffered so much for both it reportedly left MINI no choice but to design something completely different and axe this topless-capable pair. Just exactly what and when is the million-dollar question at this point, but if the Coupe does continue as-is for a fourth year, it will likely be just that—as-is. However, if you really listen to MINI's spokespersons between the lines when they say, "It's time for an infusion of freshness," you can rest assured that all-new sporting drop-top MINI is just around the corner, meaning this one is your last shot at a rip-roaringly fun, first-generation, convertible MINI.

This year the MINI Cooper Coupe returns with the same features as previous years and the same pricing, but the same new options setup as the rest of the MINI lineup. The new City Package adds an alarm system, power folding mirrors, heated mirrors, heated washer jets, auto-dimming rear-view mirrors (interior and exterior), rear park distance control and a "comfort access" proximity key and push-button start—essentially replacing the former Premium 1 option package. The new Premium option pack offers everything else in previous option packs but not in the City Package with a bit of a price break, including the automatic climate control, automated headlights and automatic wipers formerly in Premium 1, while also adding a panoramic sunroof.

Still offering the usual Base, S and John Cooper Works (JCW) trims, the MINI Cooper Coupe starts out with a 2-door, 2-passenger, front-wheel-drive compact coupe with a hatchback trunk lid. All three trims have 9.8 cubic feet of cargo space with a standard 6-speed manual or optional 6-speed automatic and a 1.6-liter 4 cylinder engine. For the Base, it puts out 121 hp and 118 lb-ft of torque on 29 mpg city/37 highway with the manual, and 28/31 with the automatic. Zip to 60 takes a mere 8.3 seconds for the manual and 9.5 with the automatic.

Drivers say the cabin feels tight even with the large amount of headroom, and its lower athletic stance and firmer suspension result in a busier ride. The rear visibility is particularly poor due to the pop-up spoiler, but still bad even before it peeks out at high speeds. All the magazines claim it's sportier, but drivers beg to differ—and that's probably exactly why it isn't going to stick around much longer.

What's your take on the 2014 MINI Cooper Coupe?

Users ranked 2014 MINI Cooper Coupe against other cars which they drove/owned. Each ranking was based on 9 categories. Here is the summary of top rankings.

Have you driven a 2014 MINI Cooper Coupe?
Rank This Car

We have 2014 mini coupe and it’s rear brake need a change. Can we go any other instead of mini service? Our warranty is expired.

Loud pop noise followed by smoke coming from engine and oil all over compartment has any one experienced this problem. Car has been in shop several times for a variety of issue.