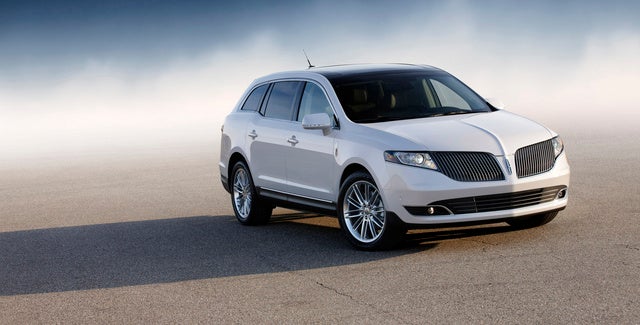 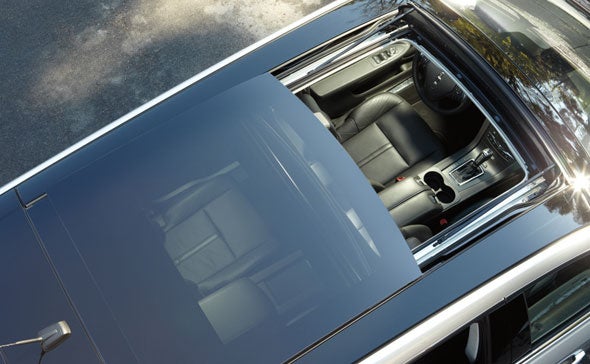 The recently renamed Lincoln Motor Company is Ford's luxury (or at the very least, premium) brand, struggling to compete with the likes of Cadillac, Mercedes-Benz, Audi and BMW. The Lincoln MKT large crossover has been one of its more successful attempts at remaking its luxury brand image. Lincoln's choice to name most of its models with the first two initials, "MK," harkens back to its "Mark" series, and as for the third letter, the "T" in MKT stands for Touring.

Lincoln has suggested that the MKT will replace the longstanding Lincoln Town Car, so you can catch the vibe this vehicle projects from that description. The 2014 Lincoln MKT is an impressively large, well-equipped crossover with a great back seat, ideal for driving several people around the city of your choice in cushy, cushy comfort. And if that ride quality sounds familiar, it's because the MKT shares its underpinnings with the large Ford Flex crossover, though the siblings look nothing alike. In fact, the MKT is truly its own animal with an impressive array of luxury and safety features comparable in both price and content to the Infiniti JX, Audi Q7 and Buick Enclave.

The new model year brought only a slight change to the grille and fascia and some additional colors and packaging choices. Beauty is in the eye of the beholder, but we think the facial tweaks help the exterior design of the new MKT look less gaudy and front-heavy than its previous form.

The MKT comes in only two flavors, both with V6 engines. The base trim's 3.7-liter V6 provides 300 horsepower to the wheels via a 6-speed automatic transmission. The smaller, more powerful MKT V6 twin-turbo engine borrows from Ford's now famous innovation, the EcoBoost engine, and powers the 3.5 EcoBoost AWD trim. This more-than-capable engine technology performs more like a V8, moving the MKT from zero to 60 in less than 7 seconds and creating 375 hp and 350 lb-ft of torque. It's also relatively fuel-efficient for its size and horsepower, getting an EPA rating of 16 mpg city/23 highway, only slightly lower than the regularly aspirated 3.7-liter engine, estimated at 17/25. The base trim comes in front-wheel-drive only, and the EcoBoost model is available only with AWD.

The real party's on the inside of this crossover, where an abundance of comfort and safety features beats much of the competition. The luxurious leather seating is firm enough for long road trips, but cushy enough for long naps, and the back seat includes options like heated and cooling captain's seats and a refrigerated center-console cooler. The power-folding third-row seats provide legroom enough for 2 average adults, but may be challenging to climb into, and the cargo space for luggage is ample.

The 2014 Lincoln MKT is packed with safety, as you would expect from such a passenger-centric vehicle, and has received Good scores from the Insurance Institute for Highway Safety (IIHS) across all tests. Standard front, side and curtain airbags go all the way to the third row, stability and traction control, antilock brakes, a rear-view camera, blind-spot alert system and adaptive headlamps are also standard, along with an inflatable rear belt system. Optional safety items include active park assist, lane keeping assist, collision warning, adaptive cruise control, blind spot alert and a smart key that can be programmed to limit your young children in their quest for fast speeds and loud music.

The 2014 Lincoln MKT also takes full advantage of the technologies offered by Ford, including Sync connectivity, this year made even more user-friendly after last year's complaints were tallied. Overall, the MKT is an excellent alternative to the truck-based, gas-gulping SUVs of the past, as long as you can get behind both the fancy exterior design and the struggling American luxury brand that's trying to find relevance on the flip side of a major recession.

Joni Gray has seen the car world from both sides. First, as a marketer inside three major automotive corporations (Mazda, Hyundai and Honda), followed by a decade of editorial positions at Kelley Blue Book and Auto Trader and as Sr. Automotive Editor at the LA Times. Her knowledge of both cars and the people who buy and drive them has given her deep insight about today's car owners and their drive for design, technology and quality as well as performance. Joni lives in Southern California with her husband and Chloe, the lazy whippet.

GuruXWJ3M I love this car best Lincoln l ever owned !! Has a Lincoln Since 1962

Have you driven a 2014 Lincoln MKT?
Rank This Car

2014 lincoln mkt 325k.. there is a whistling sound coming from inside rear of vehicle.. sounds like a slide whistle.. or even a police siren whoop whoop sound.. the dealer said it was the brakes an...

What Agency Do We Go To To Start A Class Action Suit Or Get A Recall For Th...

Roof glass exploding and shattering shards and pieces into car-for no apparent reason. Nothing hit roof glass to cause this to happen. Some kind of design flaw or stress facter on frame holding glas...