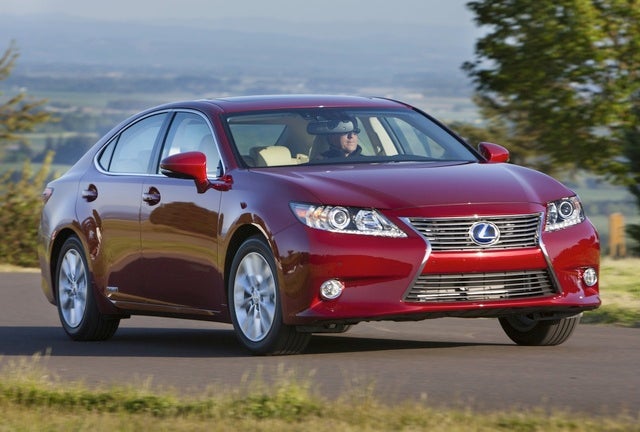 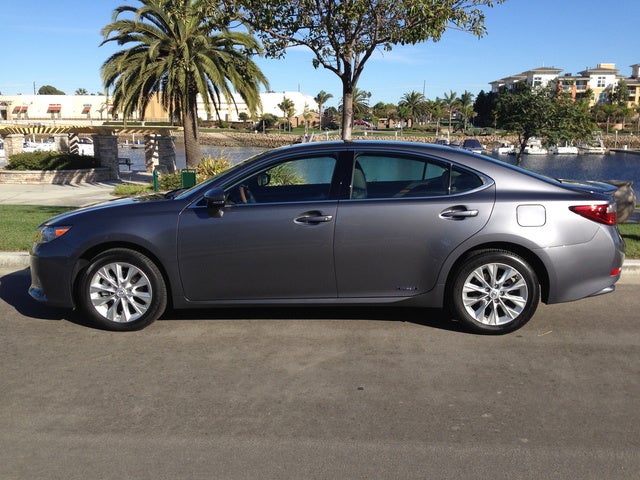 After a fairly successful debut as the first ES gas-electric offering in 2013, the 5-place 2014 Lexus ES 300h luxury midsize hybrid sedan essentially stands pat in challenging Lincoln’s MKZ Hybrid and Mercedes-Benz’s E-Class Hybrid. Again toting 12.1 cubic feet of trunk space, a tad less than its ES 350 stablemate due to the nickel-metal hydride battery pack, this handsome and well-equipped 4-door also flaunts the expected slew of posh appointments for less than the price of the Mercedes, while maintaining its Toyota pedigree with a sublime mastery of hybrid sophistication, reliability and resale value. Adding any sort of options package, however, will start to strain the budget, and the 4-cylinder hybrid powerplant won’t exactly endear the ES 300h to those with a need for speed.

Available in a single front-wheel-drive (FWD) Base trim, the 2014 ES 300h again employs the standard 2.5-liter variable-valve-timed (VVT) inline 4-cylinder (I4) hybrid powerplant, in combination with a pair of electric motors and a continuously variable transmission (CVT), to put out 200 total hp. This combination is again expected to feature 4 driver-selectable settings—Normal, Sport, Eco and EV—all ready to adjust throttle response to desired driving styles, with the EV mode allowing short trips on electric power alone. Mileage, meantime, is expected to remain an impressive 40 mpg city/39 highway.

As one would hope, the ES 300h is slated to return with such anticipated appearance perks as 17-inch alloy wheels, a power sunroof and a rear spoiler, with leatherette upholstery, leather and alloy cabin accents and full power accessories once more glamming up the interior. Cruise control and telescoping tilt-wheel steering should, of course, come standard, as should Lexus’ touted Enform infotainment system with voice directions and Bluetooth-interfaced communications. A remote garage door opener, auto-dimming rear-view mirror and dual-zone climate control will likely take the edge off the commute once again, while a single-CD player boasting 8 speakers and satellite radio is additionally expected to return.

Options should remain offered mostly in package form and are slated to include such high-end niceties as satellite-based navigation, a rear-view camera, an 850-watt Mark Levinson audio system with Lexus’ 8-inch Display Audio Package, and, new for 2014, an Apple-developed Siri Eyes-Free Mode for various iPhone-integrated apps. Further packaged options include a power-tilting and telescoping steering wheel, heated front seats and a fixed panoramic sunroof. A few standalone options, including upsized and upgraded wheels, as well as a number of exotic improvements to interior trim pieces can also be tacked on to the ES 300h.

Users ranked 2014 Lexus ES 300h against other cars which they drove/owned. Each ranking was based on 9 categories. Here is the summary of top rankings.

Is This Car Accident Free?

Has this vehicle been in an accident? Yes or No = Tks

The driver side floorboard and under the seat are soaked. It damaged my amp which I am having to repair. The tech said the damage was from moisture. Where can the leak be coming from?

90 views with 2 answers (last answer about a year ago)

I Need To Remove My Car.lexus Es 300h

Didn't see a way to remove car.I traded it in.