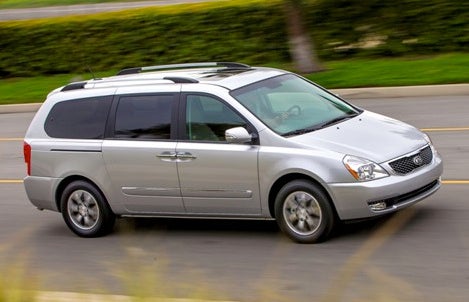 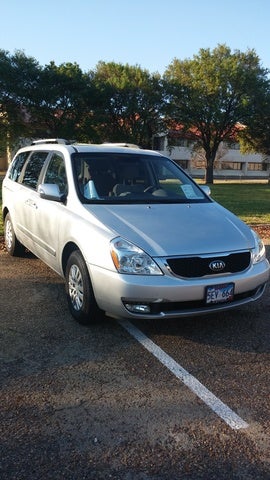 After a year off, the Kia Sedona is back for the 2014 model year. Like the tree in the proverbial uninhabited forest, however, does it make a noise… in this case, sales-wise? Few changes accompany this 7-passenger minivan’s re-emergence, leaving it, according to most reviewers, lagging even farther behind its evolving competition. The only tweaks of note in this latest iteration are a slightly re-worked grille and the addition of LED running lights and taillights. Even the trim pairing remains in place, with both the base LX trim and the top-shelf EX trim mirroring 2012.

Notwithstanding a few caveats, the 2014 Sedona is not a bad little van, with plenty of total cargo space at 141.5 cubic feet, 3 rows of seating, a peppy V6 powerplant and an admirably composed ride. Yet picky things, like a dearth of upgraded comfort and convenience features and some low-rent cabin materials, still dog this re-released rover. Sure, reviewers laud the Sedona’s value, but nearly all suggest kicking some tires on Honda’s heady Odyssey, Nissan’s nicely appointed Quest or Toyota’s traditionally feature-laden Sienna before deciding on Kia’s re-introduced soccer-mom-mobile.

Anyhow, the standard drivetrain for both 2014 Sedona trims remains a variable-valve-timed (VVT) 3.5-liter V6 engine and a 6-speed shiftable automatic transmission that puts out 269 hp and 246 lb-ft of torque. Maximum towing capacity with the optional trailer hitch installed remains at 3,500 pounds, while mileage is once more estimated at 17 mpg city/24 highway.

The LX once again can get some of its classier sibling’s standard stuff as optional equipment, while dusk-sensing headlights will be optional for both trims later in the model year. The top-shelf EX, meanwhile, can be delivered with an available Luxury Package with power sunroof, power-adjustable pedals and memory for driver's settings, and/or with the Navigation Package offering available hard-drive-based navigation and a premium audio system sporting 8 speakers, including a subwoofer.

Have you driven a 2014 Kia Sedona?
Rank This Car

I just got a 2014 Kia Sedona. I see where your suppose to check the valve clearances at 60k mi. Seems like it's an involved procedure. Is it really necessary? I thought this type of thing went out...