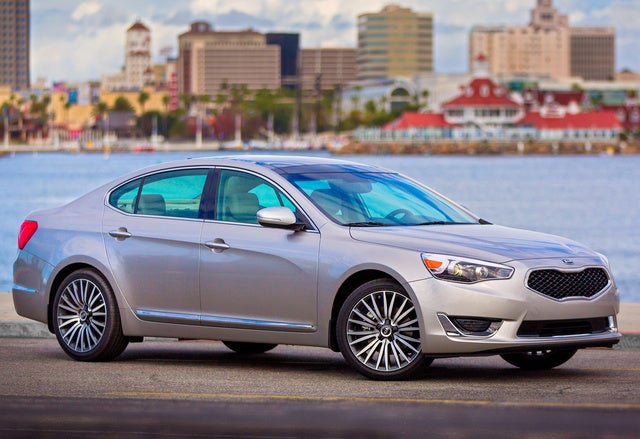 Looking for a Used Cadenza in your area? 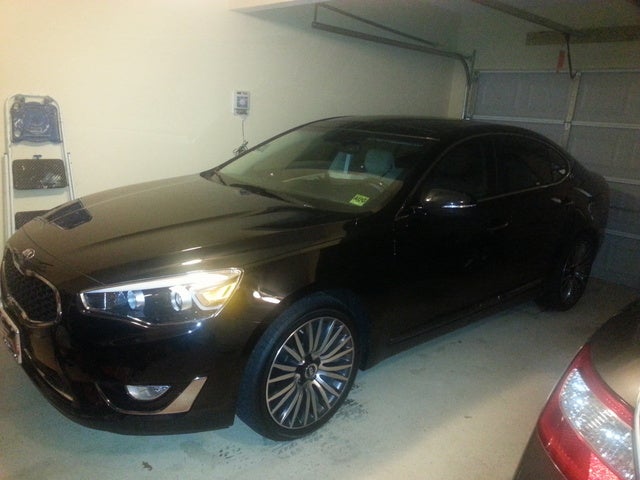 After sending the Avanti back to the drawing board nearly half a decade ago, Kia launches its largest and most luxurious sedan ever for 2014. The all-new Kia Cadenza shares the same front-wheel drive, suspension style, engine, transmission and wheelbase with Hyundai's Azera, but style and feature content much more like that of the maker's midsize Optima. To look at the Cadenza, you would never guess it shared anything with any other car but the Optima. To drive the Cadenza, you might venture to guess it's more Audi than Hyundai.

Sure, the steering is a bit light and under-communicative for a true Eurosport feel, but the Cadenza's highly responsive suspension was reportedly tweaked in the transfer from Azera to Cadenza specifically to give it an edge over the parent company's less-expensive full-size entry. Mind you, these tweaks still don't make the Cadenza a sports car by any stretch, but it's definitely a cozy cruiser even on imperfect pavement. Also true to its price segment, the Cadenza provides a more serene cabin quiet than the Azera and a hefty helping of high-end features to boot.

Its only sticking point thus far, aside from a steep entry fee, is very likely the Cadenza's limitation to a single powertrain. Where the Chrysler 300 also offers a robust V8 over its V6 and Toyota's Avalon can likewise swing a hybrid option, the Cadenza offers only a 3.3-liter V6 with a 6-speed automatic—albeit a V6 and automatic that should muster about 7 seconds down the pipe to 60 mph for its 293 hp and 255 lb-ft of torque. That said, don't expect fuel economy to do much better than the Azera's 20 mpg city/29 highway, especially if you make extensive use of the paddle shifters, but first drivers are nevertheless highly impressed with the Cadenza's smoothly punctual power delivery.

Users ranked 2014 Kia Cadenza against other cars which they drove/owned. Each ranking was based on 9 categories. Here is the summary of top rankings.

Have you driven a 2014 Kia Cadenza?
Rank This Car

Looking for a Used Cadenza in your area?

Issue With A Clock Spring

My car is Kia Cadenza 2010 model I took my car into a garage for changing the light hand switcher which is located near the wheel steering. The mechanic put the steering wheel to the center then ...

I have a 2014 kia cadenza. It just started a hesitant to start. No apparent problem with battery or altenater. What could this be?

I have a 2014 Kia Cadenza that I have noticed a hissing noise coming from the dash for a couple months now. I tried to use my AC for cold air on a warm day and noticed that wasn't working. I turned...

I Have Carence Kia I Hear Noise From Front Engine , Check Generator Bearing...

i have carence kia i hear noise from front engine , check generator Bearings,its o.k,some body say its from drive of egnation belt, please help me.