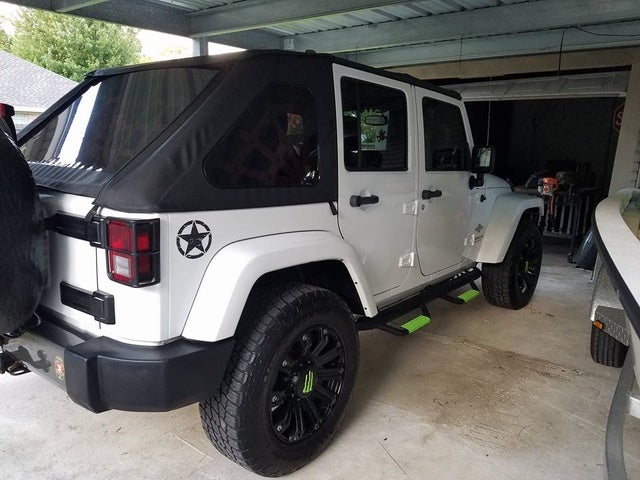 Users ranked 2014 Jeep Wrangler Unlimited against other cars which they drove/owned. Each ranking was based on 9 categories. Here is the summary of top rankings.

Have you driven a 2014 Jeep Wrangler Unlimited?
Rank This Car

Worth every penny! One of the best car buying experience I had. Read More

I am a jeep lover and I hate to say this but the prices for wranglers have gone completely insane and out of control. The car is very fun to drive, but what it offers does not represent what they want... Read More

Yes I honestly do think that is a great deal. Read More

There’s no replacement for a Jeep. Read More

It takes a little bit of digging to obtain all the features listed on the original window sticker but overall this site works out OK. Read More

Love everything about it but price it way to high. Read More

I was attracted by the custom wheels and the color of the vehicle. The car has great value when compared to other jeeps with respect to year made, mileage, and condition. The car is missing GPS and ov... Read More

I never went to the dealership or test drove any Jeeps. Although my wife has a Jeep and we really enjoy it. Read More

1st of all buying from Bergeys Lincoln was great! Friendly sales reps and very smooth buying process, didnt take more than 15 minutes! Features on the Rubicon are amazing, unlocking differentials and ... Read More

Have you driven a 2014 Jeep Wrangler Unlimited?
Rank Your Car →