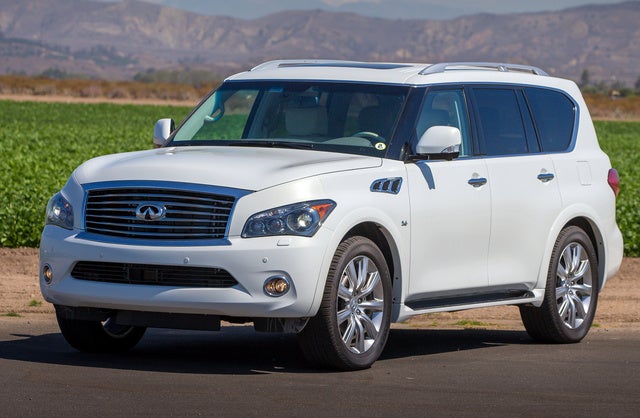 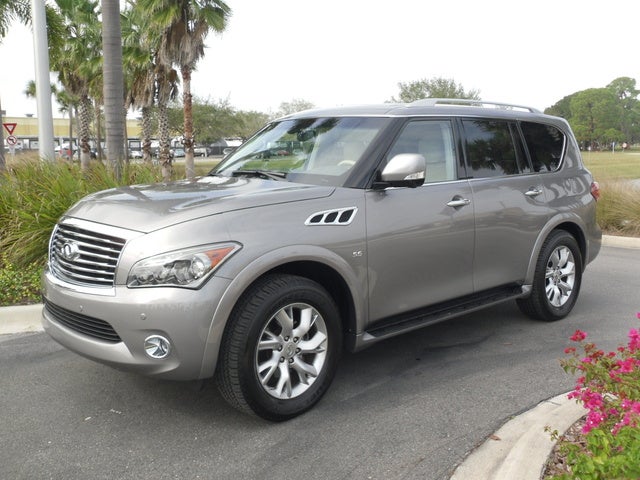 The 2014 Infiniti QX80, pretty much unchanged from a year ago but for its name, once again tends to draw praise by the well, boatload, from reviewers. They rave about its large and luxurious interior, in particular, and love how it performs, the ride it offers and its technological goodies.

Some experts decline to limit themselves to road-running vessels when they reach for comparisons and vehicles analogous to the 2014 Infiniti QX80. One calls it “a mercilessly luxurious land yacht.” Some point out the similarities between the QX80 and an executive jet, and more than one mentions the “living-room like” comfort offered by its cabins.

Here’s a straight-to-the-point view offered by another: “It’s a very nice place to sit down and take a ride.”

Do you really need room for 7, even 8 with a second-row bench? Do you really need your full-size luxury SUV to be capable of getting off-road? Do you need to be able to tow 8,500 pounds? Are you willing to put up with fuel mileage that is estimated at 14 mpg city/20 highway? Ready to drop upwards of $55,000 on a big rig that requires careful maneuvering to slide into parking spaces and perhaps even the garage?

Did you answer yes to some of those questions, and are you not terribly bothered by the rest? The 2014 Infiniti QX80—known as the QX56 before Infiniti started adjusting its naming formulas—may be just the ticket.

The 2014 Infiniti QX80 comes with rear-wheel drive (RWD) or 4-wheel drive (4WD). Power comes from a 5.6-liter V8, an engine shared with the Nissan Titan and Armada that is good for 400 hp and 413 lb-ft of torque. The V8 teams with a 7-speed automatic transmission. Infiniti says the unit can get from 0 to 60 in 7 seconds. The QX80’s independent suspension, front and rear, keeps the ride smooth and quiet over most surfaces.

Some experts find the exterior of the 2014 Infiniti QX80 a bit bold and brash. It’s difficult to find anyone who has a quibble with its spacious and classy interior. The interior features leather, natural wood and chrome accents. It comes loaded with features, and more can be added with assorted packages.

Leather upholstery, a sunroof, Bluetooth with audio streaming, navigation with a hard drive for map and music storage, and 20-inch wheels are among the standard offerings. The second-row captain’s chairs can be swapped out for a bench seat at no cost.

The 2014 Infiniti QX80 runs up against the likes of the Lincoln Navigator, Mercedes-Benz GL-Class, Cadillac Escalade and Range Rover for competition in the luxury SUV market.

The 2014 Infiniti QX80 comes with a wide range of safety features, including traction and stability control and a full array of airbags. The Technology Package lends a major hand here, as well as the blind-spot monitoring system and other features that handle lane-departure warnings, backup collision warnings and adaptive cruise control.

280 views with 1 answer (last answer about a year ago)