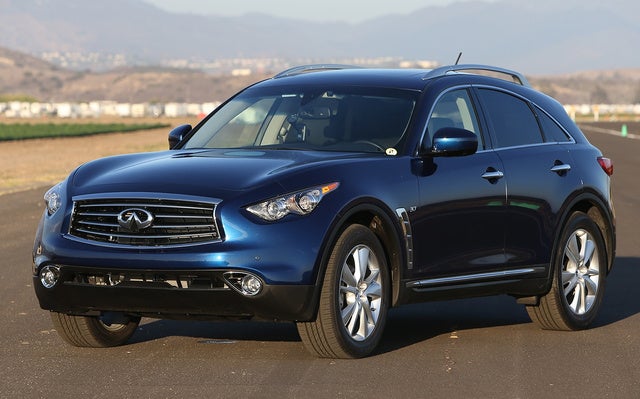 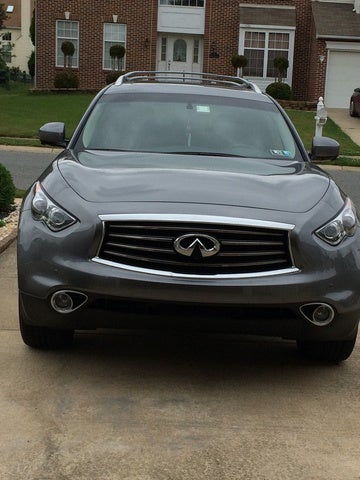 What’s in a name (change)? In its latest effort to distinguish its sedan lineup from its sport and crossover utes, Infiniti has renamed its FX SUV the QX70 for 2014. Call it what you want, this luxury-oriented 5-seat sport ute retains the styling, performance and star-studded appearance and cabin bling that make it, if not the most practical of people-haulers out there, one of the prettiest and most posh.

Except for the relabeling, little else is changed aboard this classy conveyance. It still comes delivered in 3 trims, but now they’re known as the QX70 Base, AWD and V8 AWD. Rear-wheel drive (RWD) is still standard in the Base, while Infiniti’s intelligent all-wheel-drive (iAWD) configuration, as is implied, endows the AWD and V8 AWD. This now-traditional AWD system allows cruising in RWD under normal conditions and stands ready to divert torque from the wheels that slip to the wheels that grip, both front and rear, when the snow flies or the mud gets mucky.

Powering the 2014 Base and AWD is a variable-valve-timed (VVT) 3.7-liter V6 engine that remains managed by a 7-speed shiftable automatic transmission to put out 325 hp and 267 lb-ft of torque. Towing is maxed out at around 2,300 pounds with the available Towing Package installed (ball hitch and wiring) for those who want to show off their utilitarian roots, while mileage is estimated at 17 mpg city/24 highway in the Base and 16/22 for the AWD trim.

Infiniti’s re-titled QX70 V8 AWD, as may be obvious, runs with a 5.0-liter V8 powerplant, also toting VVT. Again, the 7-speed shiftable automatic manages this peppy V8’s 390 hp and 369 lb-ft for a maximum towing capacity of 3,500 pounds, with the proper equipment. Of course this V8-packing ute’s mileage numbers drop to an estimated 14/20.

As well-equipped as this handsome Infiniti sport ute is, there are still a number of options and accessories that can be added on. The Base trim’s Premium Package includes a navigation system, XM Navigation radio with real-time traffic, Infiniti voice-recognition technology, dual-occupant memory settings, roof rails and the Around View monitor that comes standard in the V8 AWD trim.

Meanwhile, the Deluxe Touring and the Technology packages all remain offered with the Base and AWD, and again include stuff like 20-inch alloy wheels, aluminum pedals and adaptive, radar-interfaced cruise control (Intelligent Cruise Control in Infiniti-speak).