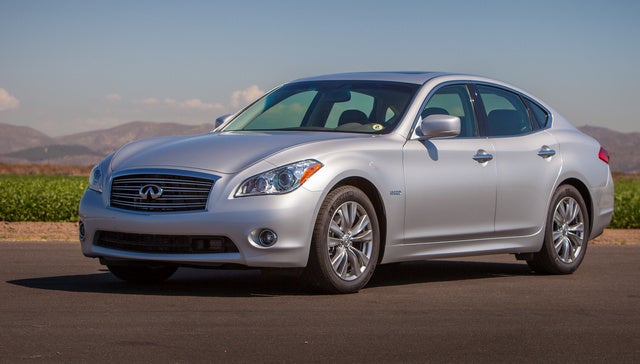 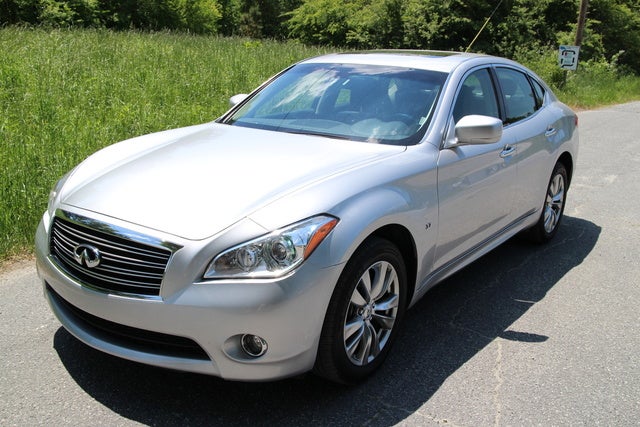 Well, that’s it. Infiniti no longer offers the sporty M sedan. But wait! The crafty folks at Nissan/Infiniti have relabeled their sporty 5-passenger luxury-oriented 4-door for the 2014 model year the Q70. Virtually unchanged from the now-defunct M designation, the introductory 2014 Q70 comes in three trims, the base 3.7, the up-powered 5.6 and the fuel miserly Hybrid, each of which even more definitively announces the various powerplant offerings. Of course the Q70, in carrying on the M tradition, remains a solid choice as a high-end commuter car, with an upscale cabin, aggressive good looks and a sport-tuned suspension. The trunk in non-hybrid versions, meantime, again offers 14.9 cubic feet of toting space, with the Hybrid’s state-of-the-art lithium-ion battery pack again leaving luggage space at a somewhat paltry 11.3 cubic feet in the hybrid variant.

In any case, like its M forebears, the 2014 Q70 comes in standard rear-wheel-drive (RWD) configuration, but intelligent all-wheel drive (iAWD) is available in both non-hybrid trims. This AWD system allows cruising on dry roads in RWD, while retaining the ability to automatically divert torque to all 4 wheels when the going gets slippery.

Meantime, don’t fret—the standard leather upholstery remains in all Q70 trims, as do the genuine wood, alloy and leather accents that decorate a good deal of the interior. Those 18-inch alloy wheels also return in this re-labeled 4-door, as do the power sunroof and the heated, tilt-adjustable power outside mirrors. All trims also boast heated power-adjustable front seats, full power accessories and memory for driver's settings, as well as cruise control, telescoping tilt-wheel steering, a remote garage door opener and a rear-view camera. Dual-zone climate control and Bluetooth hands-free calling return as standard equipment lineup-wide, with the 3.7 version and the Hybrid trim offering a 160-watt audio system with a single-CD player, 6 speakers and satellite radio.

At the heart of the 2014 Q70 3.7 is the same 3.7-liter V6 powerplant that graced Infiniti's old M cars. Mated with the standard 7-speed shiftable automatic transmission, this peppy 6-banger throws down 330 hp and 270 lb-ft of torque, while variable-valve-timed (VVT) mileage remains estimated at 18 mpg city/26 highway in RWD editions, and 17/24 in the available AWD versions.

Need more power? The Q70 5.6 comes with a VVT 5.6-liter V8 mill that again comes under the management of the 7-speed shiftable automatic. Look for 420 hp and 417 lb-ft to increase the old heartbeat by a couple dozen a minute, with mileage figures running 16/24 in RWD variants and 15/23 in AWD iterations.

The Q70 Hybrid, meantime, flaunts a 3.6-liter hybrid V6 engine and a 50-kilowatt electric motor that combine for 360 total horsepower. The 7-speed shiftable automatic again manages 256 lb-ft of torque under gas-electric power, and 199 lb-ft when cruising on electric power alone (for short distances). Brake regeneration once more helps with recharging, with engine stop-start technology letting this Hybrid shine with its EPA-estimated mileage of 27/32.