If you enjoy spirited driving and want that ride in the form of a competent daily driver, the Q60 is the ideal coupe that does not make sacrifices. 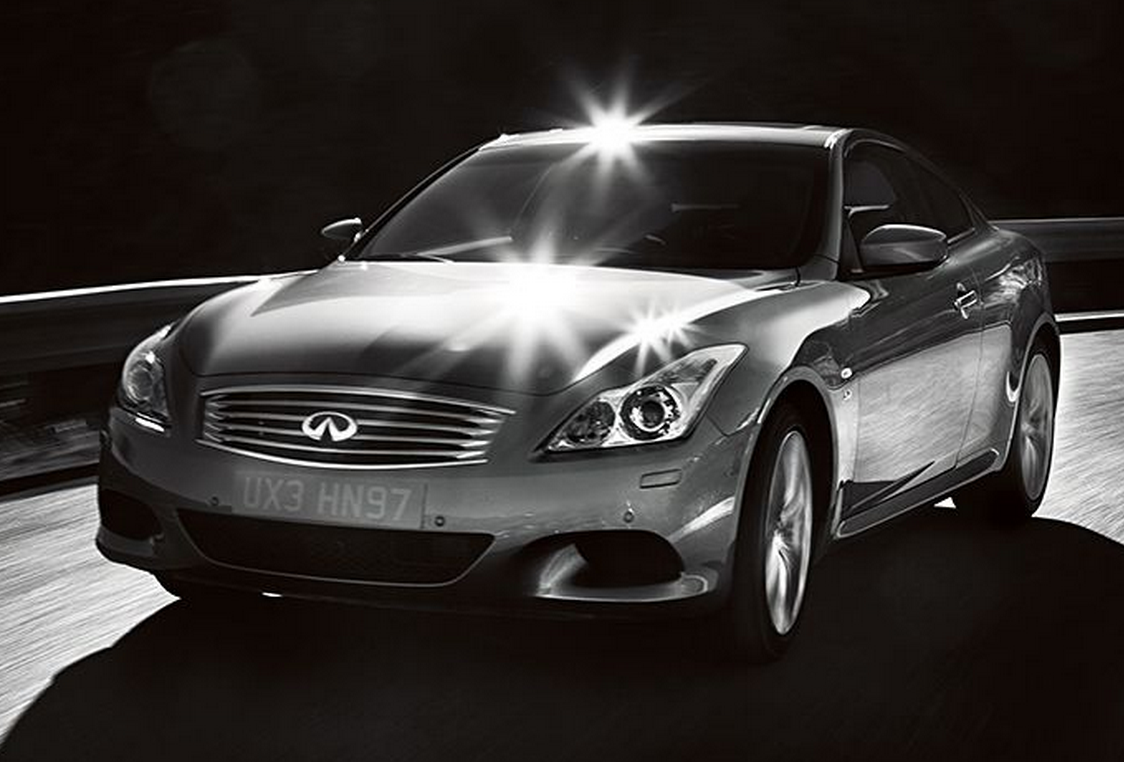 Don’t look now, but the luxury coupe is a dying breed. Once the staple of the American Road, it is hard to imagine a brand like Lincoln or Chrysler without luxurious, powerful coupes. But there are a few corners of the market where the luxury coupe still exists. Thankfully, Infiniti keeps the hope of personal luxury motoring alive with the fetching and fast Q60. 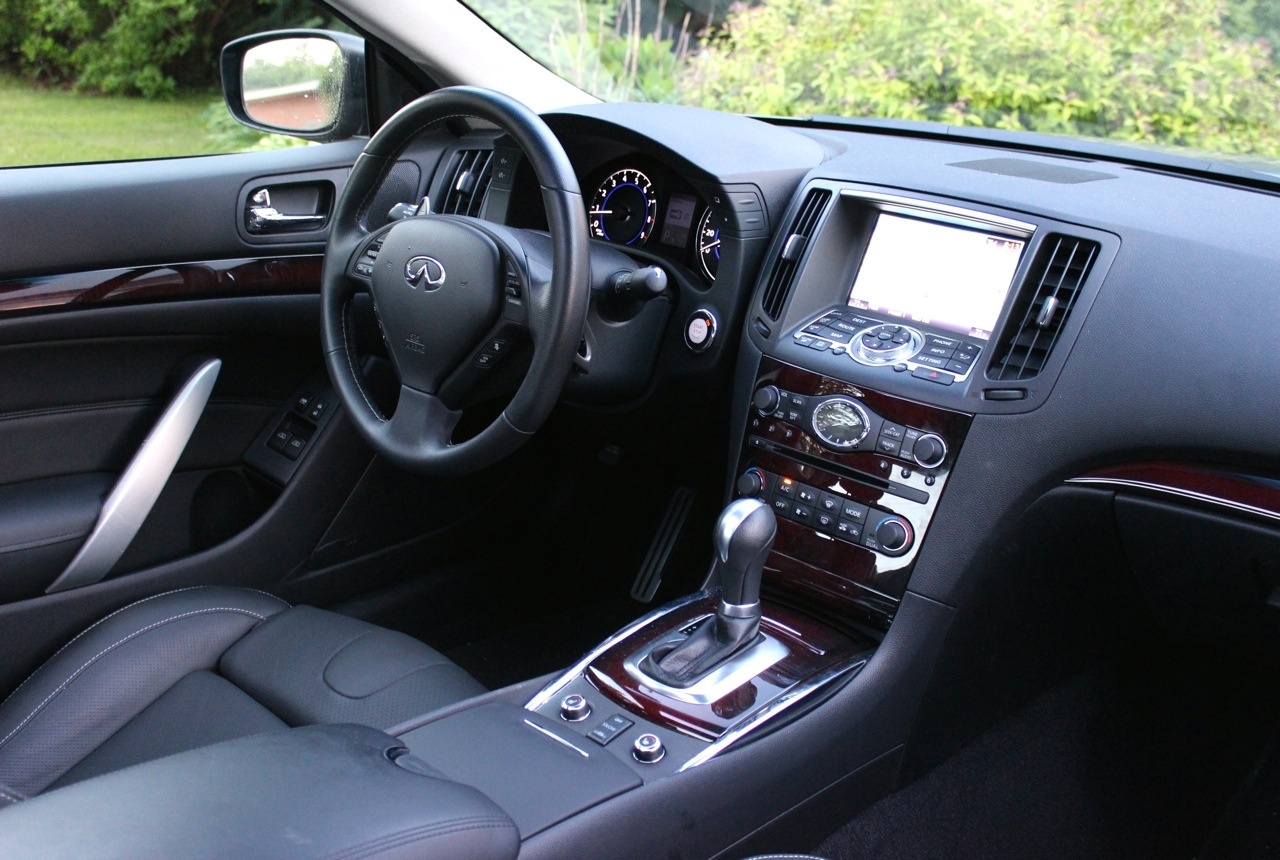 The name may be new, but the look should be familiar. Infiniti has sought to overhaul the naming conventions for its entire lineup. The old system had different letters for the models and numbers for the engine size. In that system, this car was the G37 (a G-level car with a 3.7-liter engine). Now all cars are Q—or QX for crossovers and SUVs—and the number dictates the hierarchy. So the Q60 is now the midsize luxury performance coupe.

Very few changes have been made since the name change. Past versions of the S trim have had a more pronounced spoiler, but the Q60S features a more subtle rear spoiler with some chrome brightwork.

The overall silhouette of the car is one that conveys speed. It is a very Japanese-style coupe shape, with a stout front end and a main body that reflects a teardrop running from the top of the windshield and coming to a point at the rear spoiler.

This version of the Q60S has all-wheel drive, and as such receives unique wheels. We like the dark charcoal color, but we can’t help but feel that the actual wheel design detracts from the visual punch of the Q60.

Inside, the design is similar to that of every Infiniti for the last 10 years, which is not a bad thing in the least. The center stack is capped by a touchscreen navigation system and backed up by tactile buttons and controls. A nice touch has always been the analog clock in the center of the dash, a style choice competitors have imitated for years now.

The cockpit is very driver focused, and the seat and controls are all meant to help the driver operate with enthusiasm.

The Q60 starts at $40,950 and comes standard with leather seating, 18-inch wheels, heated front seats, dual-zone climate control, a backup camera, Bluetooth hands-free calling, USB port and a host of other features. The All-Wheel-Drive trim starts at $42,600 and adds a Snow Mode—perfect for New England drivers. 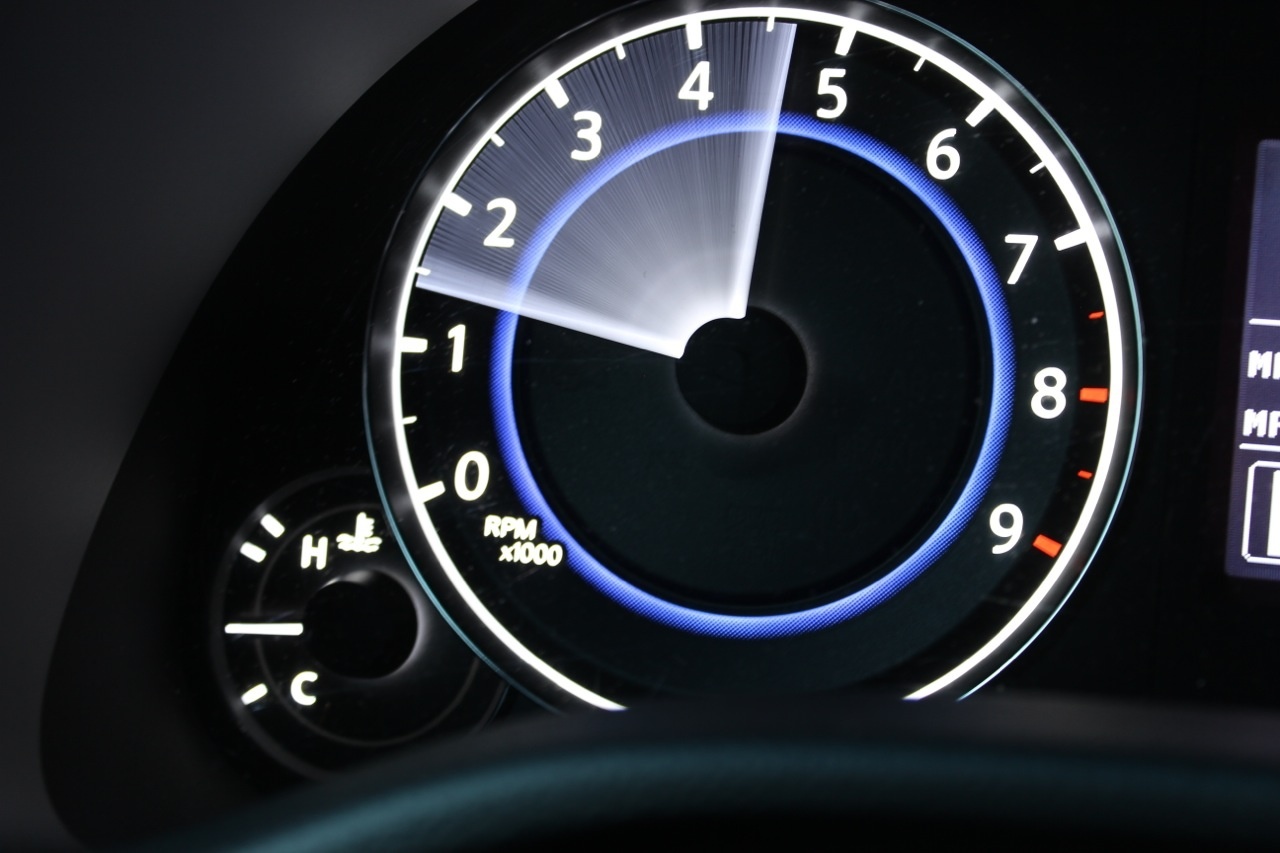 Nissan has itself a bit of a franchise with its VQ-V6 engine, a variant of which has been used in everything from its crossovers to its world-class GT-R supercar. It is also used throughout the Infiniti lineup, but with further refinement and tuning. At 3.7 liters, it's about as large a V6 as you will find on the market today. The 3.7-liter V6 under the hood of the Q60S makes 330 horsepower. For reference, the 3.7-liter V6 that Ford loves to promote makes only 305 horsepower.

That power is sent through a 7-speed automatic to the rear wheels or available all-wheel drive, as on our test model. Rear-wheel-drive S variants are available with a 6-speed manual transmission, but the automatic manages the power very well.

We were really impressed with not only the power of the Q60S, but how it is delivered to the road. The transmission features paddle shifters that do their work quickly and efficiently, and if you leave it in automatic Sport mode, it will hold shifts longer so as to improve acceleration.

The all-wheel-drive system is quite capable from a handling standpoint. It grips the road well and claws its way around tight corners, delivering dynamic performance with nary a wheelspin. This AWD system is rear-wheel-drive biased, but a Snow Mode can be enabled, which will make the AWD more safety-oriented by more evenly distributing the power.

The tight steering ratio and AWD conspire to form a downside. The turning circle of the Q60S is pretty poor, and maneuvering in spaces like parking lots will take a bit more strategy than it should from a small(-ish) coupe. 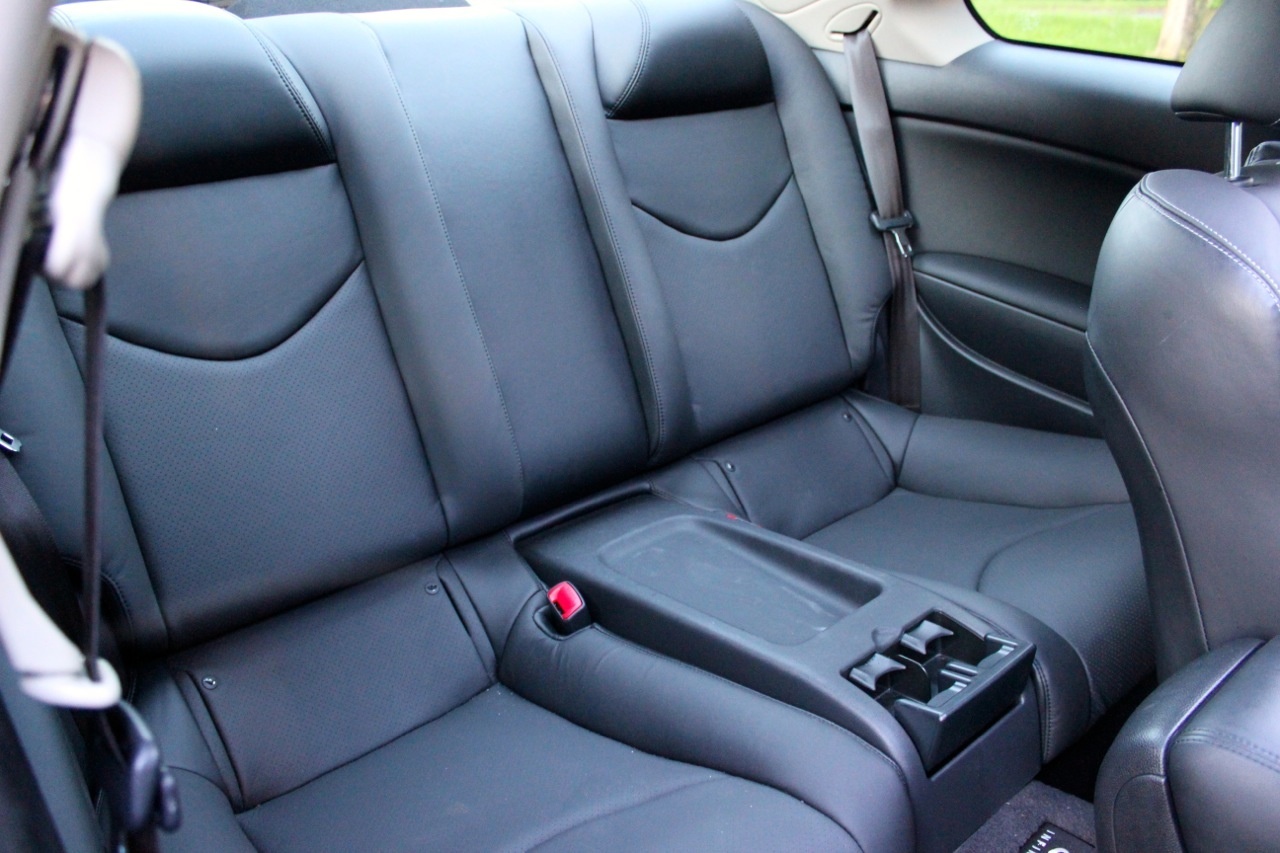 The term “personal” in Personal Luxury Coupe is emphasized in the fun-but-tight Q60. The driver and passenger have accommodations that can be generously described as form-fitting. You have the elbow overlap that typically plagues compact cars, and there is not a lot of hip and shoulder room. A 6-foot, 3-inch gentleman like myself has to struggle getting in and out at times.

The rear seats are not very useful for anyone larger than a small child. If you have 3 adults, it is best that the third adult sit behind a front-seat passenger and duke it out with that front passenger as to how far up or back to set the power sliding seat. Luckily, there is a quick release for the seats that folds them forward, and a one-touch toggle so you can hit the button once and let the seat slide forward, as opposed to holding your hand on the button and waiting for the seat to slide all the way up.

There is also a seat slider button above the center armrest on the passenger seat. This clever button placement allows the driver to slide the passenger seat fore and aft without having to reach all the way over to the far-side floor.

The trunk is also a tight fit. You might be able to get two weekend bags in there, but you will likely use the rear seats for storage more than accommodating passengers.

The Q60S is more a performance daily driver than a Grand Touring car (like a BMW 6 Series). The seats are a little harsh for long trips, and your derrière will fall asleep if you are on the road for more than 2 hours at a time. But this is all a fair trade for the high level of performance the Q60 delivers. 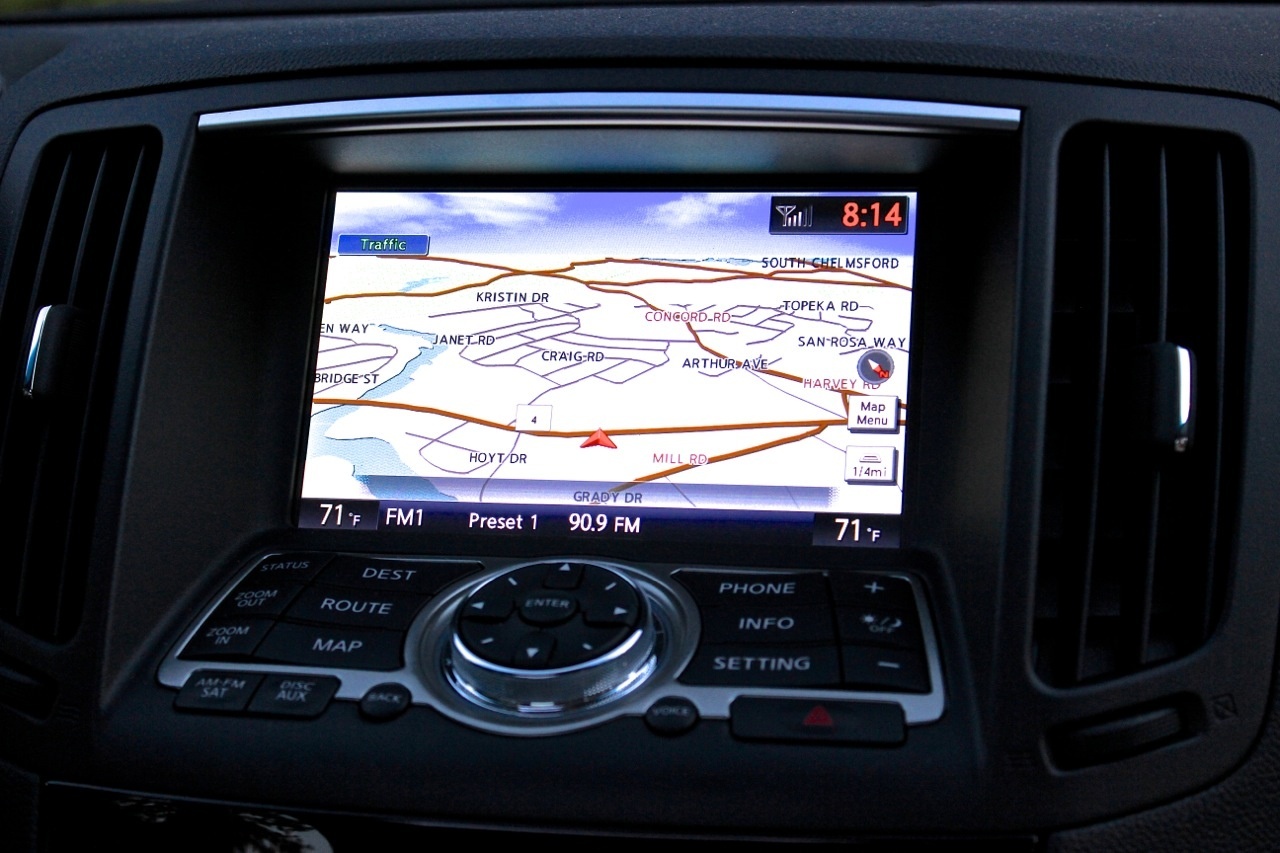 Infiniti has surprised some with its performance chops but has shocked no one with its tech—it's a general understanding that this luxury automaker delivers some crucial safety and infotainment technology.

In addition to a lane-departure warning system and forward-collision avoidance, the Q60 also has the terrific distance-aware cruise control. This has become a common feature on new vehicles, but it's worth emphasizing its importance. Rather than having to disengage the cruise control every time you encounter a slower vehicle ahead, this system slows the Q60 down to match the speed of the vehicle ahead of it. When the vehicle ahead moves to the slower lane, the car will speed back up to the pre-selected speed.

Infiniti should be commended for the fact that it has not succumbed to the trend in the luxury market to utilize clumsy controllers for its nav system. Mercedes, BMW, Lexus and Audi all use proprietary joysticks, trackballs or whatever you’d like to call their controller. It means none of these brands has the easy-to-use touchscreen found in Infiniti products. It also means that every commute will offer just a little bit less headache than dealing with a competitor's system would. 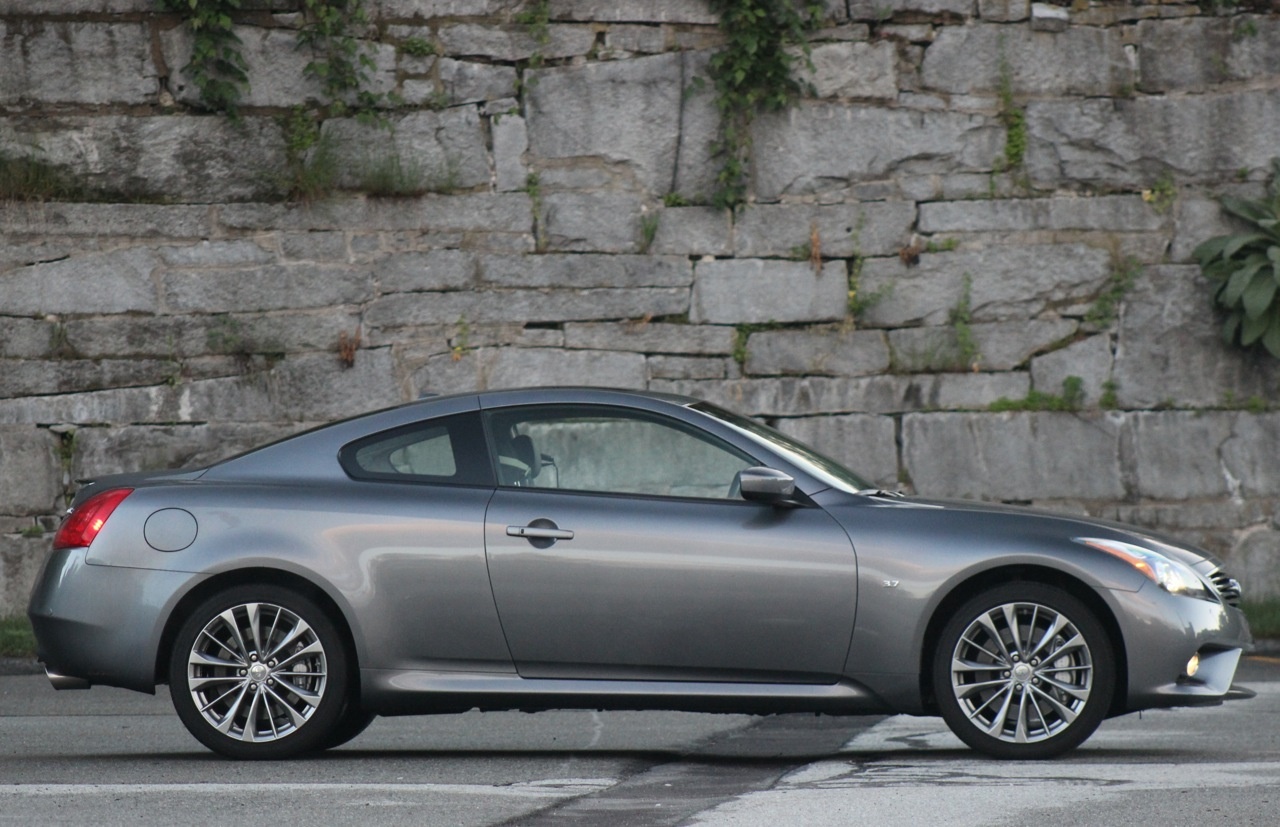 The Q60 employs a very competent traction-control system, as well as Vehicle Dynamic Control, which observes the driver inputs compared to what the vehicle is actually doing and makes minor adjustments to the power application and brakes to keep you on the road and out of trouble.

Preview Braking is also available on the Q60, which uses sensors to tell if a vehicle in front of you is stopping quickly. If for whatever reason you do not react, it can warn you and also pre-pressurizes the brakes in anticipation of you slamming on them.

In addition to all this high-tech gear, Infiniti has you covered with the important basic stuff, like all-season tires, 4-wheel disc brakes and a full array of front and side impact airbags. 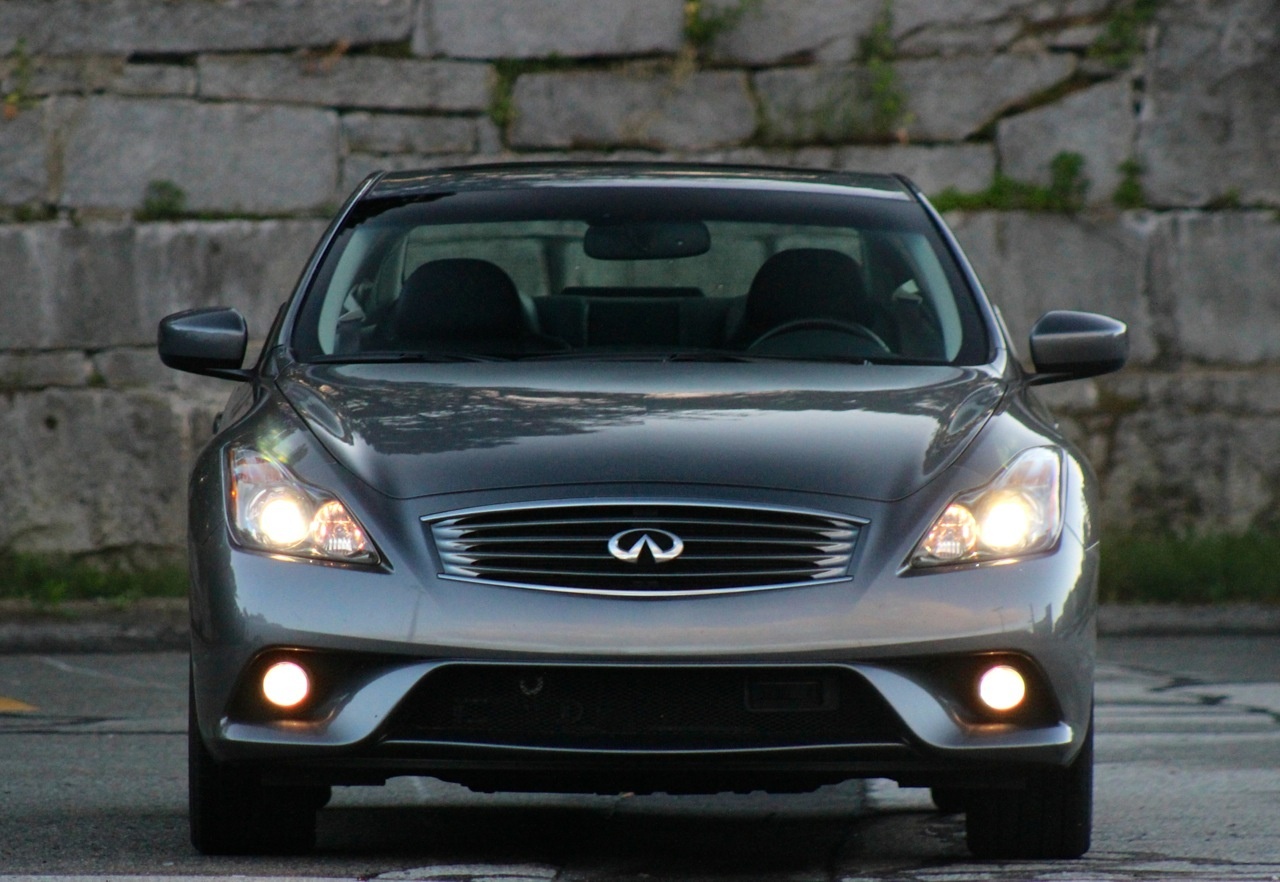 A decade ago, Infiniti would have been considered still a pretender in the luxury market, but the Japanese brand has truly come into its own. No longer trying to mimic the Germans, Infiniti models have unique styling, and in the case of the Q60, performance that directly targets the BMW 4 Series coupe and to a lesser extent the Lexus IS coupe.

The Q60 stacks up closely with the Lexus on pricing, but the IS is nowhere near the performer it once was, and the Infiniti coupe feels much more like a German sports coupe, especially S trim that we drove.

The base Q60 has more power than the base BMW 428i and even more power than the 6-cylinder 435i. Pricing for the 435i matches up pretty closely, with the S trim starting in the same $46,000-range as the 435i, but where the Q60 has options lumped into groups (which keeps pricing down), BMW has more of an a la carte approach, which gets very pricey. As such the Q60 is arguably one of the best deals you can get for an all-wheel-drive sport coupe with more than 300 horsepower. If you enjoy spirited driving and want that ride in the form of a competent daily driver, the Q60 is the ideal coupe that does not make sacrifices.

Johnny Infiniti is definitely on the right track with the new Q lineup which still does need improvements in the performance-space. Overall, Infiniti Q60 for 2014 does come well equipped with options; read more here: http://www.douglasinfiniti.com/2014/02/15/2014-infiniti-q60-coupe-summit-nj

TheHorror The G 'series' were probably the most recognizable models in the Infiniti lineup. While the Q60 is still a perfectly good car, is at best confusing; at worst, it could away turn less-aware shoppers. See also: Acura Integra and Legend

Is It Possible For A Heated Side Mirror To Melt The Plastic Casing?

171 views with 2 answers (last answer about a year ago)

Can The Play Be Taken Out Of The Steering On An Infinity Q60? Seems To Have...

I Can't Tell What The Trim Is On An Infinity Q60

I am looking at a Q60 Convertible and it is listed as a Sport, but it has an automatic and 18in wheels. Is that possible? Looking up the VIN number: JN1CV6FE6EM902420 sometimes shows base or no Tr...

Just wondering how the non turbo produces that kind of performance?\ Thanks