With the Q50, all three of Infiniti’s latest major campaigns (naming, styling and tech) converge in one aggressive and smart luxury sedan. 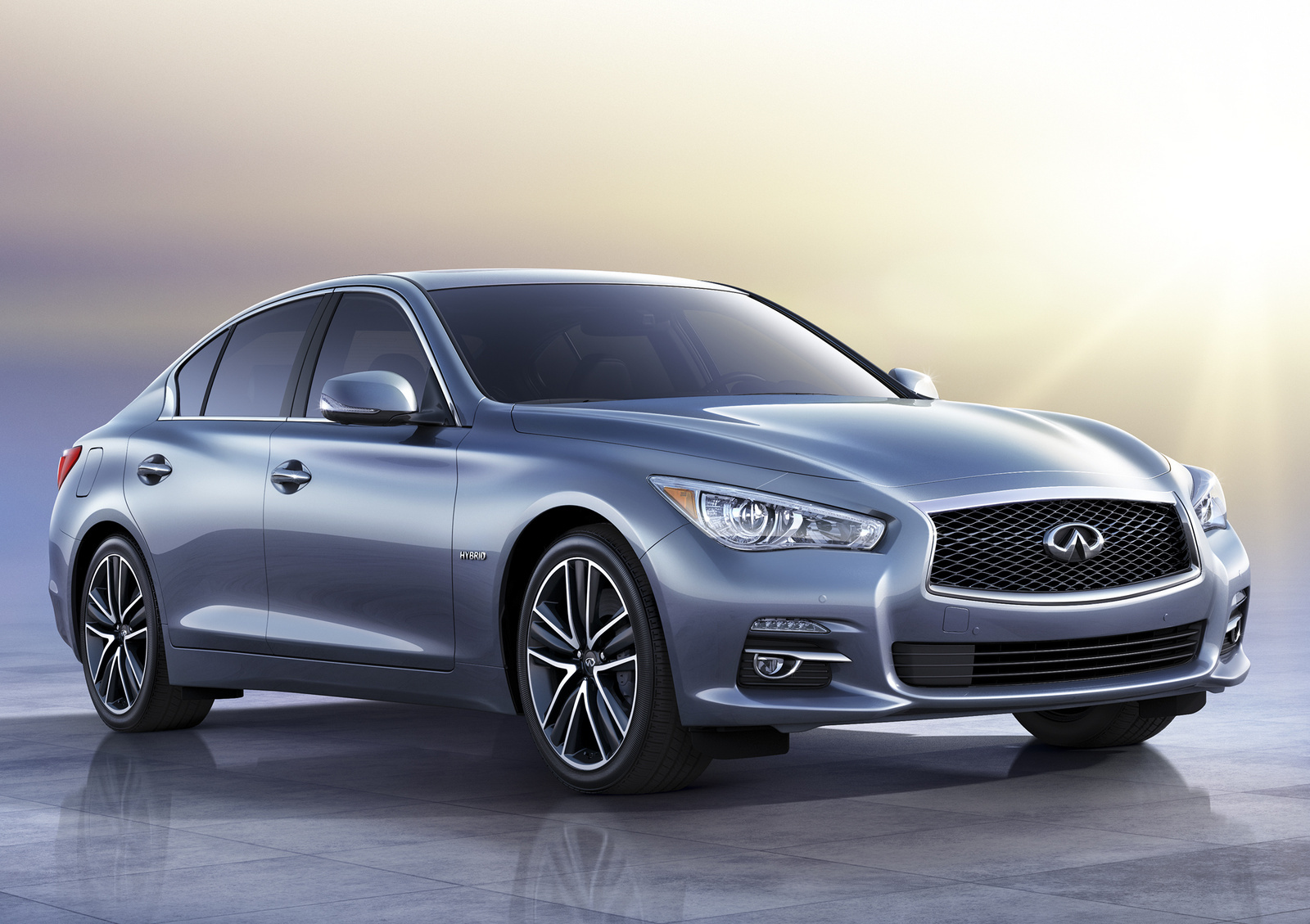 What’s in a name? If you are employed in Infiniti’s marketing department, that question has been a source of frustration and ire as of late. The Japanese luxury brand has renamed its entire lineup for the 2014 model year. Letters like M, G, JK and others have all been replaced with Q and QX. Infiniti has done this for a number of reasons, but it means re-educating itself and others on every single model.

Luckily for Infiniti, the new Q50 takes on the new lettering from the start. With the Q50, all three of Infiniti’s latest major campaigns (naming, styling and tech) converge in one aggressive and smart luxury sedan. First is the name– some may argue the Q50 replaces the G37, but the G will continue to be sold (as the Q60) for the next year (maybe more), so this is a standalone model. The second is the styling—the angular headlights and demonstrative grill have been the most pure manifestation of the Infiniti Essence concept to date. Finally, there is the technology—the Q50 has more tech features than a U.S. Air Force communications AWACS. These elements conspire to deliver an extremely competent luxury sedan, with the looks, the tech and the performance to excite. With the changes in corporate styling and naming conventions, this is the perfect car to usher in this new era for Infiniti. 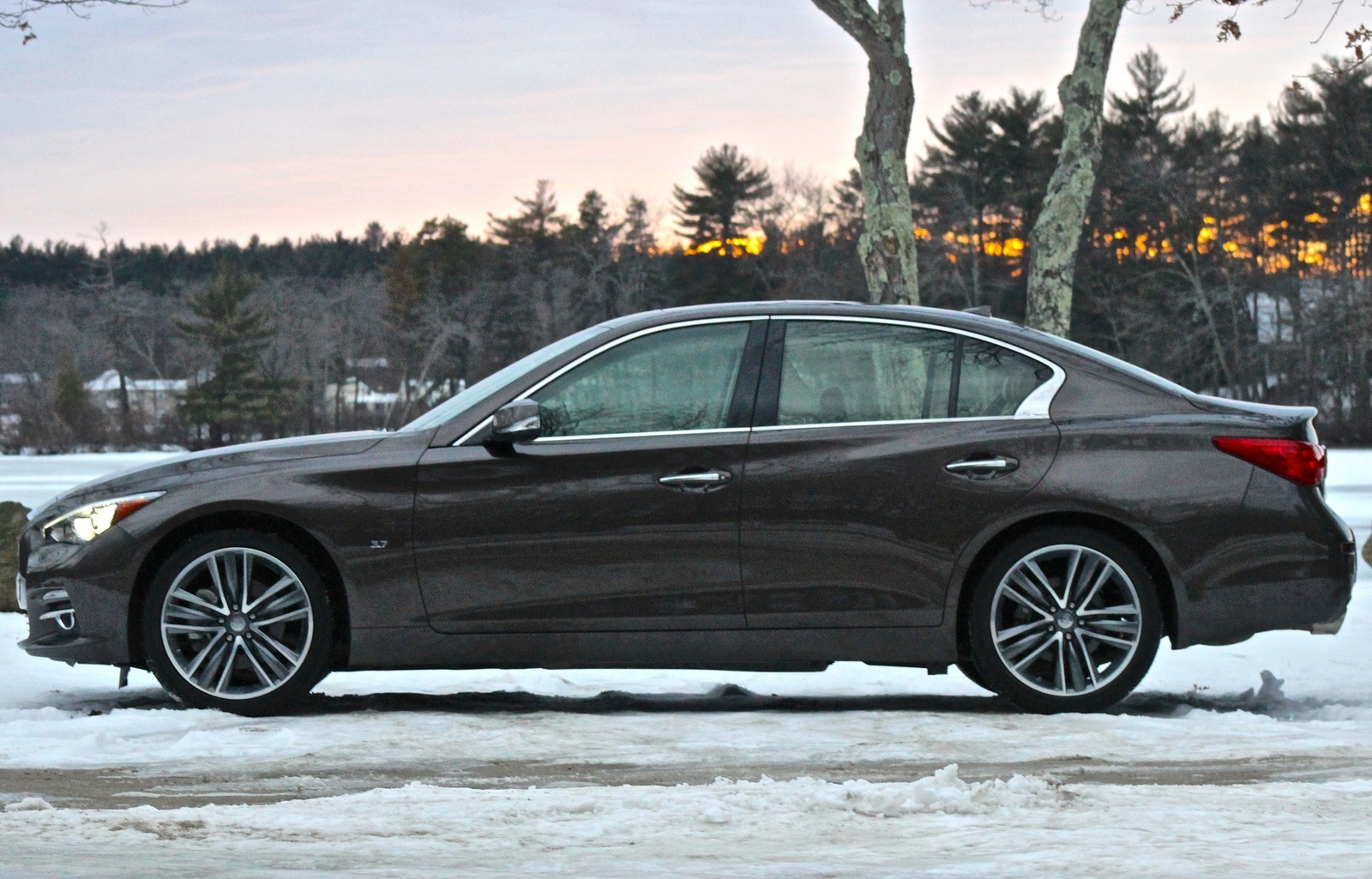 Historically, Infiniti design either aped the Germans or was derivative of its lesser Nissan counterparts. Looking back on older Infiniti models, it is very easy to determine which Nissan model was related to it. In 2009, the Japanese luxury brand debuted the Infiniti Essence concept, and it put the luxury world on notice. From there, subsequent new models would adopt Essence styling elements, but the Q50 is the most pure on-road expression of the Essence concept thus far.

The low, wide front end is dominated by a massive mesh grille with “pinched” sides. That grille is flanked by a pair of menacing headlights, which sets the tone for the rest of the car. It is apparent that Infiniti’s goal is to deliver luxury with attitude.

Though the exterior is menacing, the cabin is soft and inviting. The seats and door panels feature flowing stitching that's easy on the eyes. It’s as if the plan was to create a cabin that was welcoming and comfortable, while leaving other cars passing by to quiver in fear. 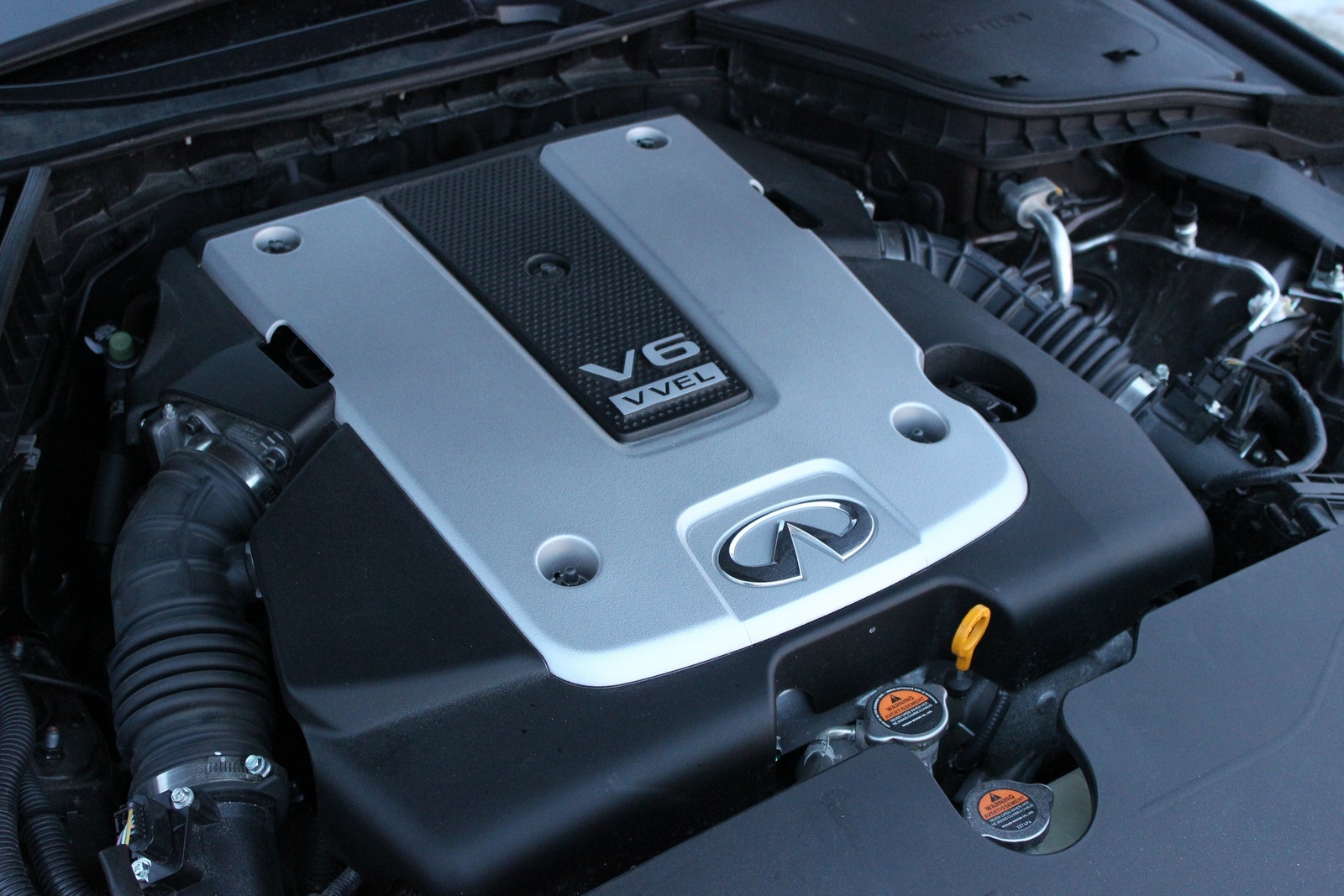 Has any automaker gotten more out of one engine than Nissan/Infiniti has from their venerable VQ-V6? The VQ-V6 engine can trace its roots back to the 1995 Infiniti I30 luxury sedan, when it displaced only 3.0 liters and made only 190 hp. With each generation of luxury sedan, it has grown, and today the high-revving 3.7-liter VQ-V6 makes 328 hp and 269 lb-ft of torque—enough to get the Q50 from zero to 60 in just 5.3 seconds. Power is sent through a 7-speed automatic transmission to the rear wheels, or to available all-wheel drive—as was the case with my test car.

The drive-mode selector is found behind the shifter, under the driver’s right elbow (which makes it awkward to toggle). It has Standard, Eco, Sport, Snow and Personal drive settings. Snow and Eco work in similar ways, slowing the throttle response for a smoother buildup of speed. Sport quickens throttle response and even tightens the steering feel.

The change in steering feedback is accomplished via a “drive-by-wire” steering setup. Unlike a traditional steering linkage, this system is entirely electronic and not connected mechanically to the actual steering system. In case of a power loss (and per NHSTA safety regulations), there is still a mechanical steering column in there somewhere that connects to the wheel in emergency situations.

According to Infiniti, the electronic steering means less power is needed to turn the wheels, which saves fuel. Our AWD Q50 was listed at 19 mpg city/27 highway/22 combined. In our week of driving (mostly in Sport mode), we observed fuel economy of just a shade over 20 mpg. Your mileage will vary based on driving habits, and there is an Eco mode that will get you the best mileage in your Q50. 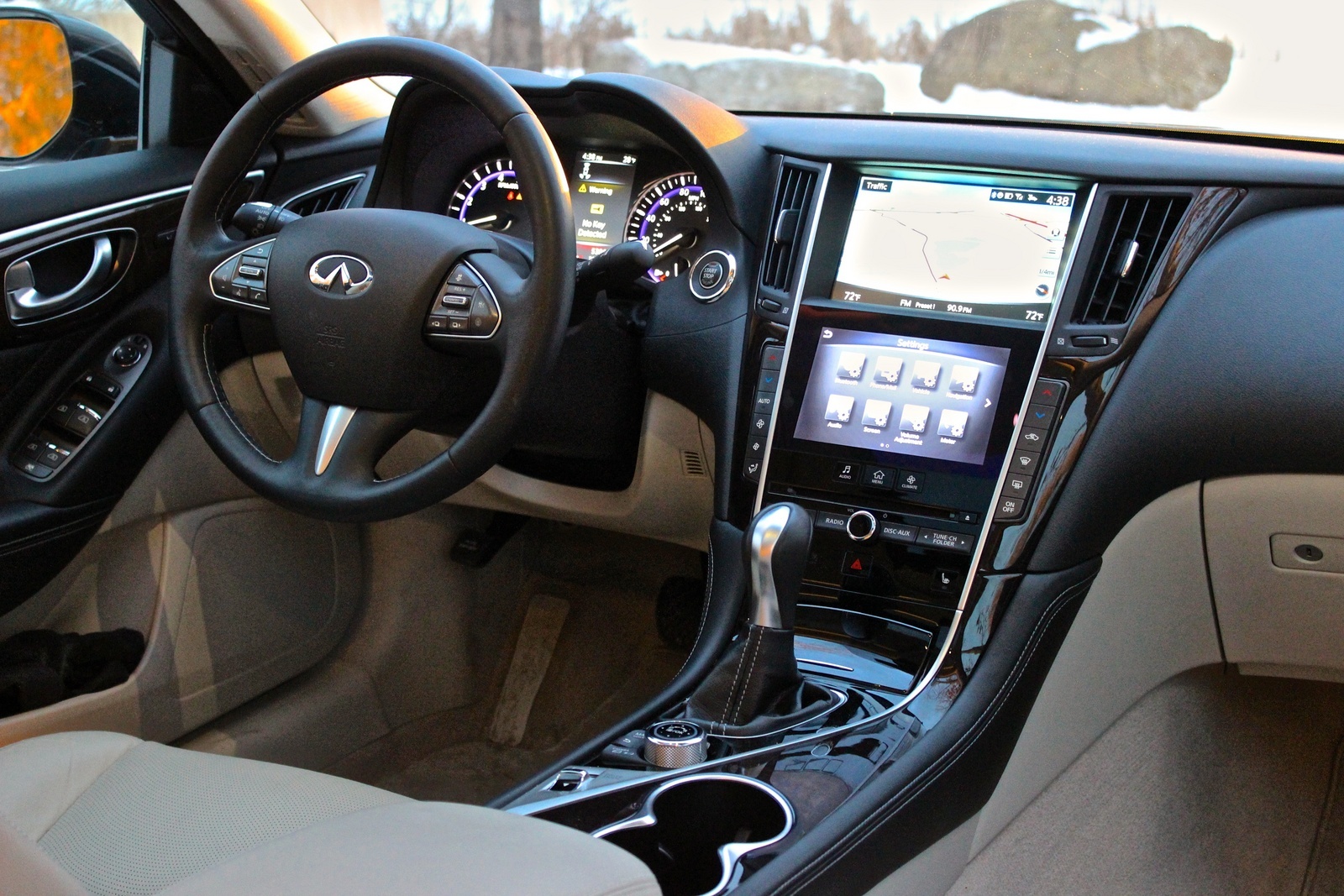 The cabin layout of Infiniti sedans has been moderate to good in recent years, but with the 2014 Infiniti Q50, cabin design goes to another level. One of the great potential pitfalls in designing a car is leaving it to the engineers—and engineers alone. Without a more human touch, vehicle controls can get left cluttered and nonintuitive. Not so with the Q50, which was definitely designed with the average driver in mind.

For cargo and extra people, the Q50 comes through as well. We took a day trip out to western Massachusetts after a brief snowstorm. The rear seats were roomy enough for 2 more adults, and the trunk devoured all of our bags. The rear bench is also a 60-40 split-fold unit—surprisingly (or unsurprisingly) not always a certainty in the luxury realm. 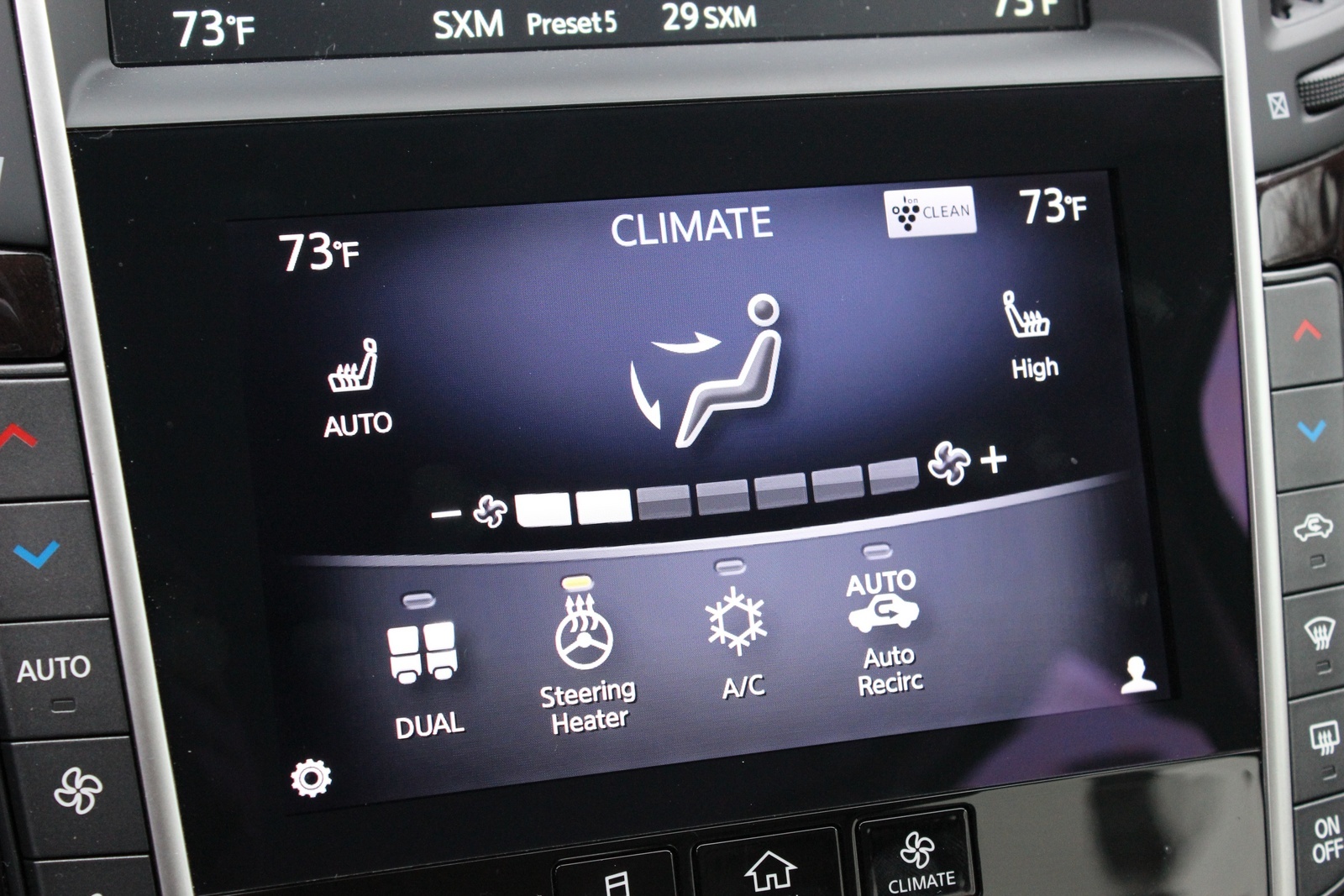 The best example of Infiniti’s commitment to smart-yet-human tech is the dual touchscreens in the Q50's dash. In the past, you had to cycle through navigation, climate or navigation menu prompts. With this system, the top touchscreen is almost always on navigation, while the lower touchscreen can cycle through audio and climate controls. To make things even more simple, the navigation screen has its own dedicated control knob right down by the shifter. Given how automakers tend to overthink things with car interiors, the Q50’s layout is refreshingly ergonomic.

When you start the Q50, the lower screen features an “Intel Inside” prompt, presumably while the dual touchscreen is booting up. This must be a new partnership between Intel and Infiniti, because this system had several hiccups. Once, I was trying to hang up a Bluetooth-connected phone call and play music from my phone. This caused both touchscreens to shut down and reboot. Another time, I was trying to crank up the heat and heated seats when getting into the car one icy morning. Outside temperatures read like quarterback jersey numbers—and it took forever for the system to boot up so I could operate the climate controls.

We're sure this system will improve with time. With automakers’ ability to update software, this will not require waiting for a 2015 model, but perhaps a 2014 update will sort it out. Had this bug not occurred, we would have scored the Q50 a 10 for tech. 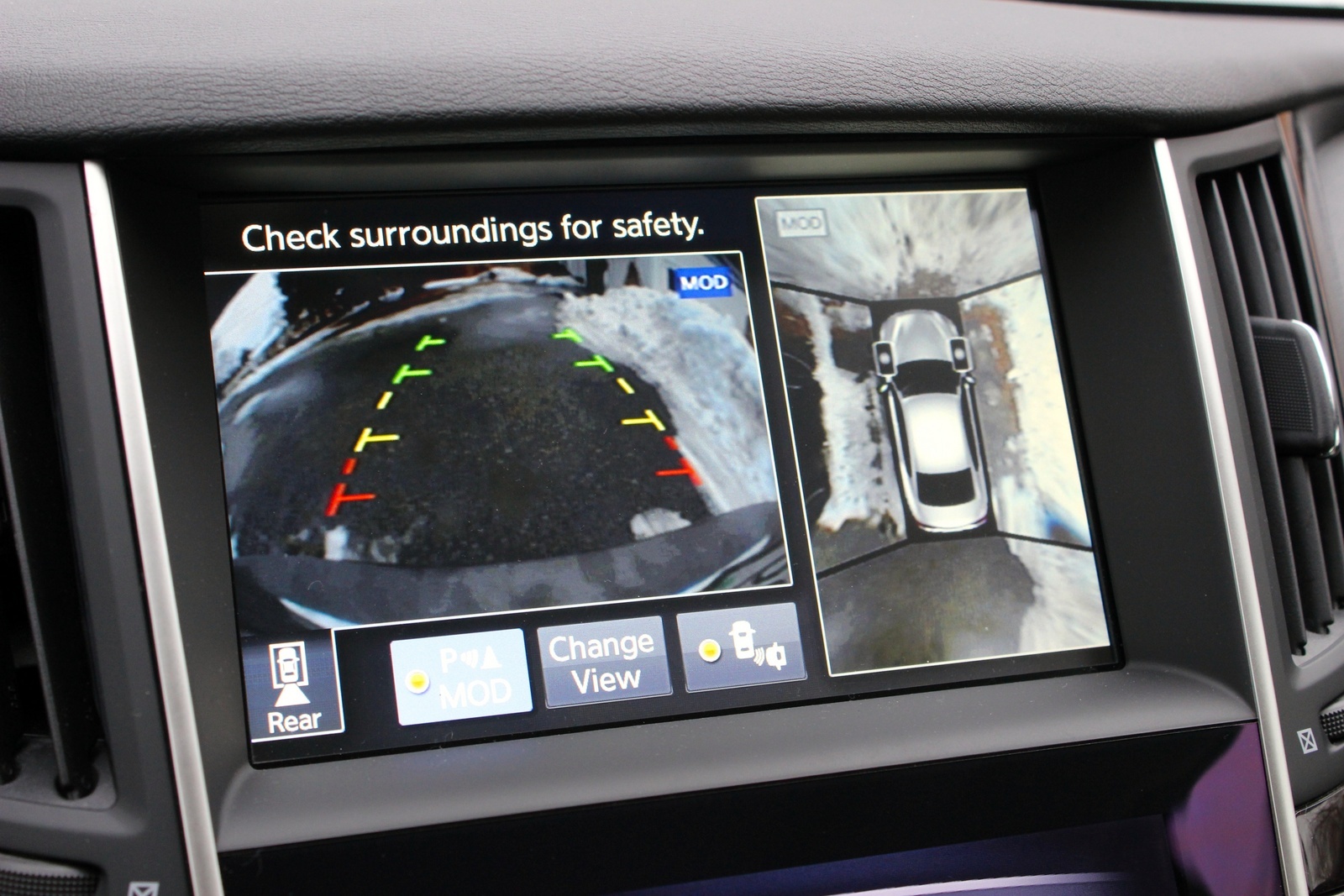 The first TV spot that I saw with the Q50 was memorable not for the style or the performance, but for the feature that can predict a crash—two cars ahead. According to Infiniti, the Q50 can bounce a radar beam under the car directly in front of it to determine if a crash is imminent, and alert the driver—before even the most astute driver would know a crash is coming.

Other safety features include blind-spot monitoring, lane-departure warning and frontal crash-prevention sensors. The “overhead” parking camera system is great for parallel parking, while the rear cross-path warning system will alert you of cars crossing by if you are backing out of a parking spot. In short, this is the kind of technology that would make even the NSA jealous. 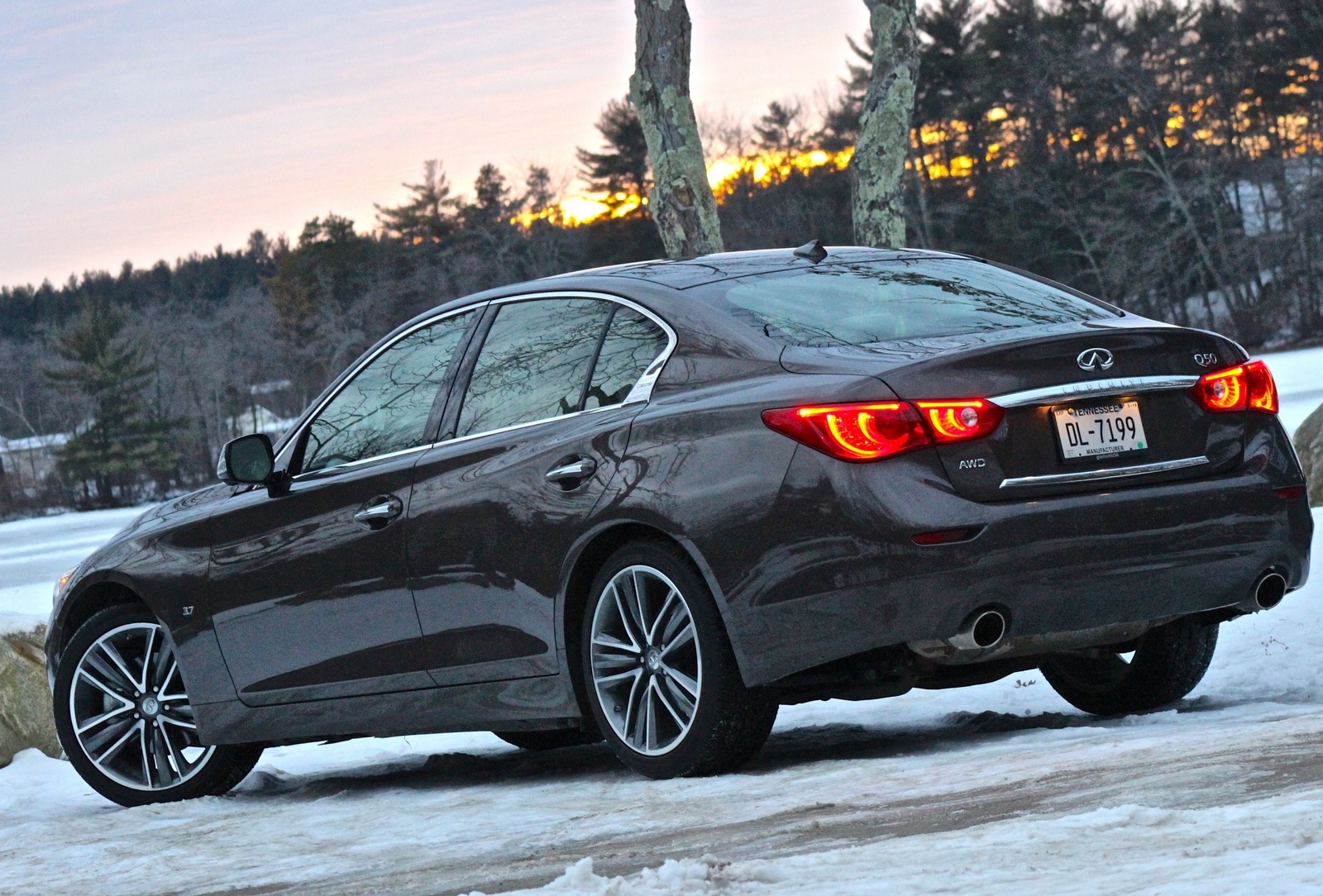 The Q50 rides in interesting territory. It outclasses Japanese rivals Acura and Lexus, but is not quite as sporting as Audi or BMW. Infiniti probably stacks up best against Mercedes-Benz, the other automaker with Formula 1 ties. With a base price of $35,800, the Mercedes-Benz C-Class undercuts the Q50's $37K base price, but the Merc delivers only 201 horsepower from a 4-cylinder engine. To get V6 power you’ll need to opt for the C300 ($39,400), but it makes only 248 horsepower. The C350 has the largest engine and a price of $42,100, but its 302 hp is still short of the Q50’s standard 328 horses.

You can pay more to get the reputation that comes with the German brands, but if you want performance that inches into Bavarian territory with technology that drivers can access in a much more natural manner, the Q50 is the motoring definition of “East meets West.”

mbelyus I have the Sport w/ AWD and love it. I only have the delux touring package, but for the price I could not pass it up. I've had it for two years and have no complaints. Many reviews slam the steering, but I find the feedback very good. The Q50 needs AWD to really shine. I've driven some of the rwd versions for a loaner and they were nice, but lacked the great handling of the AWD. The 3.7 has great acceleration. It has an ECO mode and I used it for the first month but saw very little difference in mileage and performance suffers in the mode also. I believe the Q50 is a great car for,the price. Plan to get another as my next car again.

Users ranked 2014 INFINITI Q50 against other cars which they drove/owned. Each ranking was based on 9 categories. Here is the summary of top rankings.

what does this slight chuddering of my brakes mean? What needs to b done?

Carfax Says That Vehicle Was A Manufacturer Buyback. Is It Safe?

Infiniti Q50 2014 with 18k miles is for sale. The carfax report states that it was bought back from Nissan in California because of, "iKey inoperable". I wanted to know if it was safe to buy and if...

How Much Should Dealer Accept If Paying Cash For A Vehicle That Listed For ...