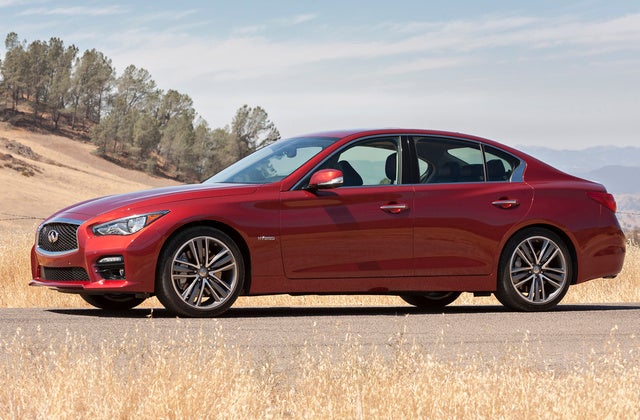 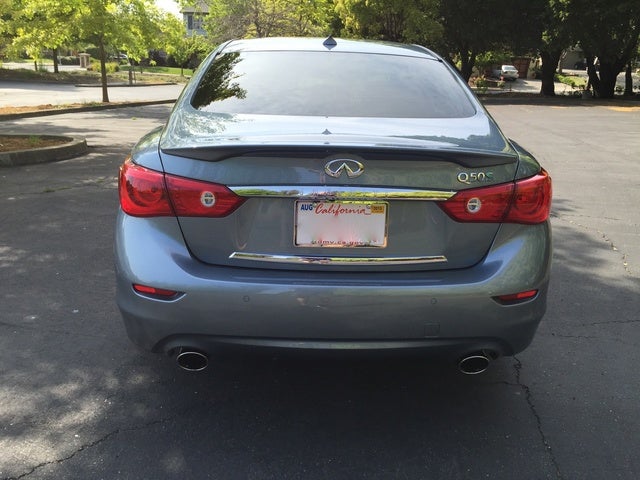 Drivers demanding sport performance, cutting-edge drivetrain innovations and at least decent fuel economy have a new and thrilling option with Infiniti's debut of the Q50 Hybrid for 2014. This next-generation complete redesign of the G37, in this case made hybrid, offers a trunk just shy of the typical sedan's, with 14.1 cubic feet of space next to the battery. Pick up your jaw now. This is but the first of many grand answers to longtime driver problems with every sedan in the compact class—not just hybrids or the now-discontinued G37.

Its brother, the Q50, offers 4 more cubic feet in the trunk and 0.2 more liters in V6 displacement, but the Q50 Hybrid supplements a slightly smaller 3.5-liter V6 engine with enough electric assistance to provide 354 total hp, about 34 more than the relatively less-computerized Q50. Company spokespersons report this should further boost fuel economy for the Q50 Hybrid over even the Q50's incremental improvements on the G37's 19 mpg city/27 highway via all the new aluminum components and class-leading 0.26 drag coefficient of this redesign. Logically, all these improvements should also drop the 0-to-60 mph benchmark below the G37's 6 seconds with the same 7-speed automatic, but by how much for all of those figures is anyone's guess until someone gets their hands on one.

Also up for debate until the Q50 lineup materializes on dealer lots is its brand-new by-wire steering system, a first in any mass-produced car. The so-called Direct Adaptive Steering (DAS) promises everything you ever read in a sci-fi novel, and then some, but for this debut Infiniti just focuses on using DAS's autonomous advantages to ease driver fatigue. At a time when makers offer only an engaging driving experience with their sport packages, Infiniti instead seeks to offer a thrilling ride without the typical driver effort and participation in an apparent reversal of prevailing thought for all of automaking's history. Bold, to say the least—and it just might work, given the help of F1-checkered Sebastian Vettel in this system's development.

Supported by a pair of fail-safe backup controllers and a mechanical clutch to switch drive controls to manual just in case anything should happen, DAS bypasses all of that under normal operation to electronically manipulate mechanical drivetrain components. This differs from your typical electric or hydraulic steering systems in that the rack is unnecessary until something goes catastrophically wrong, allowing your maneuvers to reach the wheels a few milliseconds faster than any mechanically based system ever could. That's just the basics—what Infiniti does with it for this debut and what it's promising in future years will absolutely blow automaking-as-usual out of the water.

Take for instance, the new-for-2014 Active Lane Control, which pairs with the Lane Departure System to detect road conditions, including crosswinds and lane markings, in order to hold your bearing without any additional effort on the driver's part. The Drive Mode Selector also now features a Custom mode to lighten steering feel and quicken responsiveness to the driver's particular taste through DAS, which is then also remembered for up to 4 drivers alongside climate, audio and navigation preferences in the new i-Keys system. If that's not awesome enough, you get to control all of this through a pair of touchscreen displays capable of both tandem “split-screen” and independent operation for a completely space-age experience.

Offered in both Premium and Sport flavors with either all- or rear-wheel drive, the Q50 Hybrid is just as open to custom configurations and feature options as the previous G37—something automakers generally skimp on for hybrids altogether, let alone at debut. Whether the upcoming Q60 coupe and convertible redesigns of the G37's same will also have a hybrid option (and a manual transmission for it) is still anyone's guess, but one thing is certain: We're drooling with anticipation.

Have you driven a 2014 INFINITI Q50 Hybrid?
Rank This Car

It's been a week and NO CALL FROM CARGURUS! I have a buyer and need to initiate the sale