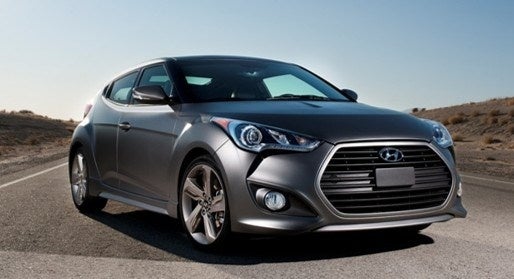 Average user score
5 ⁄ 5 stars
Based on 3 reviews
Overall View by IanR — It makes a perfect daily for anyone who is looking for a middle of the road car. It's got good millage, good power and many features including a leather interior and heated seats for a fairly cheap pr... Read more 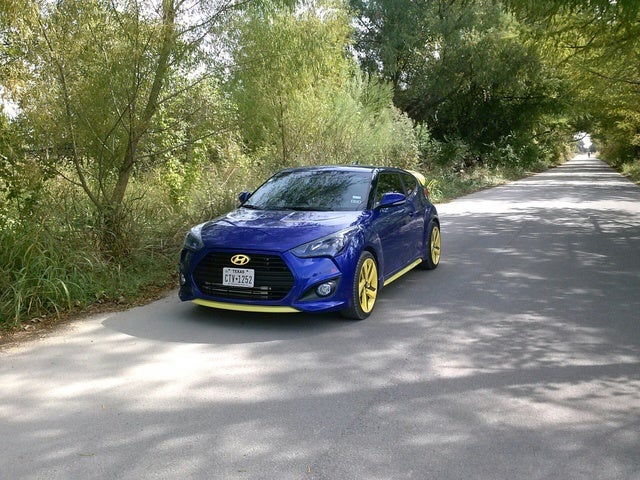 It’s crazy enough it just. might. work. Sad to say, but it’s almost a revolutionary concept: Strip down one of your vehicles for added performance by losing the ever-expanding list of “essential” extras, and actually charge less for the result. Makes sense on paper, but in the showroom such efforts are usually rewarded by a marked increase in purchase price. Not here. If you want the fastest Veloster Turbo they make, you’ll actually pay less.

You’ll get less, too. Every R-Spec Veloster Turbo has had some vicious liposuction and plastic surgery, eliminating such creature comforts as side-repeater mirrors, automatic-up windows, heated seats and the proximity key. Hyundai positions this as a way to save weight and up the performance, but when your list of deletions includes silliness such as losing the electroluminescence in the gauge cluster, you quickly realize this is all about saving money rather than weight.

At least they’re up front about it. Go for a stripper like the Boxster Spyder and you’re going to lose essentials like the radio, the door handles and even a structurally sound top. Plus, you’re going to pay more. Here, the new R-Spec is actually the cheapest of the Veloster Turbos out there, a rare nod to logic in the automotive pricing arena. Pair that with some of the performance features of the R-Spec, and there’s quite the value to be found here: a sport suspension with higher spring rates front and rear, stiffer transmission mounts, quickened steering and a 6-speed, close-ratio manual transmission with a B&M racing sport shifter.

But if you can’t bare holding that window “Up” button for all 3 seconds until it reaches the top, there’s always the regular Veloster Turbo. While the R-Spec gets unique sporting considerations, the regular-old turbo is content with more comfort-inducing fare. Leather upholstery with heated seats, a rear-view camera with 7-inch touchscreen, voice recognition and a 450-watt Dimension stereo. For aesthetics, look to 18-inch alloys, aluminum pedals and those ridiculously expensive electroluminescent gauges. Add the Ultimate Package and you’ll be swimming in a panoramic sunroof, rear backup warning sensors, automatic headlights, a navigation system and an auxiliary 115-volt outlet.

Strange, though, that all Veloster Turbo trims get the same drivetrain: a 1.6-liter, direct-injection 4-cylinder, utilizing 18 psi of boost to bump output to 201 hp and 195 lb-ft of torque. Despite this, Hyundai has tried to make the R-Spec look faster at the very least, with strange red accents on the front splitter and door sills. It looks ridiculous, which can be good, but here it falls strangely flat. Personal preference may differ, of course.

Unfortunately the Veloster Turbo is one of the latest victims of acoustic enhancement in automobiles. Hyundai’s Active Sound Design is standard on all Veloster Turbo models and attempts to improve on the engine's harmonics artificially by pumping enhanced engine sounds into the cabin. Maybe next they can make the scenery look like it’s flying by the windows faster, or they can artificially bump the speedometer’s calibration to make it seem like you’re going 20 mph faster than you are? No thanks.

Acoustic cheating aside, the Veloster Turbo is a hell of an option, whether you’re looking for a spirited performer, a grocery getter, a city crawler or a kid caboose. With plenty of room, plenty of power and plenty of value, it’s really only the looks that will hold people back. Petty considerations aside, it’s a welcome addition to an ever-increasing roster of inbetweens—not quite a car, not quite a wagon, but still just right.

What's your take on the 2014 Hyundai Veloster Turbo?

Lee I like the Veloster because it's a different design in the sea of sameness. I actually wished deep down that it was a Honda design. Most of all, the styling, features; fuel- mileage; and roominess moves me. It's not fast, but it's quick enough to get the job done. I am def. a fan!

Steve I actually just got a 2014 Veloster turbo. Some of the features mentioned in the article are incorrect or not applicable. The model to get is the turbo, not the base model. The engine sounds like a leopard's purr. It's quick, nimble, and you had better watch it because you could overdo it easily. Great gas mileage, comfortable, and very useful for a sporty car. It likes to be driven like a sports car, because well, it is a sports car! People always ask me, what is that? I always say I don't know exactly, it's a Veloster! It's not like anything else out there, and maybe that is one reason I got it, but now that I've had it a little while, it was a great choice!

Users ranked 2014 Hyundai Veloster Turbo against other cars which they drove/owned. Each ranking was based on 9 categories. Here is the summary of top rankings.

Have you driven a 2014 Hyundai Veloster Turbo?
Rank This Car

How Long Till I Have My Cash If I Sell Through Car Gurus?

If I accept on e of these sales it says the money is held in Escrow, how long till I have my cash from the moment the buyer takes the car?

What Is Engine Control System

Hey everyone I was wondering if I should use a header or down pipe on my Hyundai Veloster Turbo.

48 views with 7 answers (last answer about a year ago)

If Car Is Listed Salvage, But No Accidents, What Does That Mean?