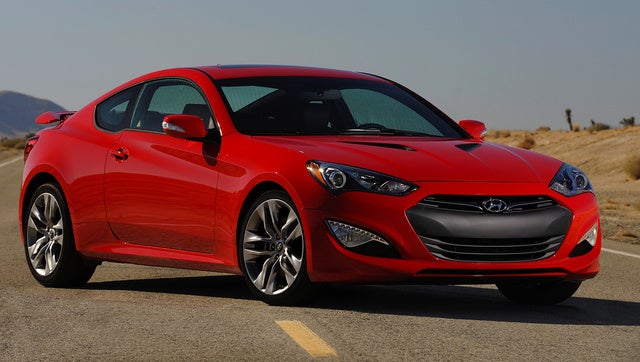 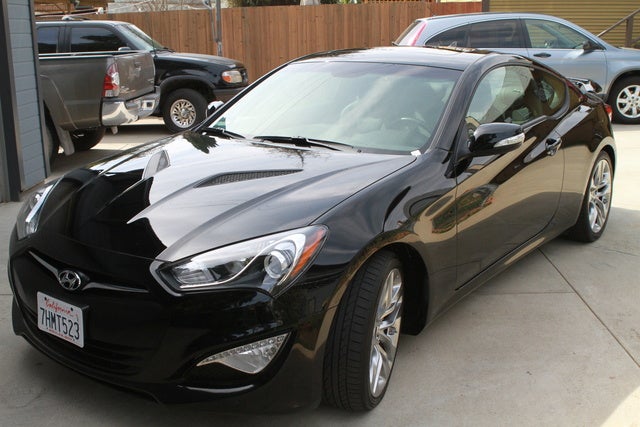 Following on the heels of a major update for 2013, the Genesis Coupe pushes the envelope just a little more upmarket for 2014. If the price bump across the board doesn't make that obvious on its own, the new Ultimate trim certainly should. The 2014 Genesis Coupe also gets several new standard features, including some transmission upgrades, fog lights, cruise control and an auto-dimming rear-view mirror for the entire lineup.

Though feature content and transmission build both improve, the Genesis Coupe's widely praised performance is exactly the same as it was for 2013, and handling shouldn't noticeably change either. The 2.0T and 3.8 V6 engines carry over, but the optional 6-speed manual gets hill-start assist and some reinforcements, and the 8-speed automatic now standard for all but R-Spec models (which don't get the option for it, either) gets downshift rev-matching. Those driven by sound might find a greater appreciation for the 2.0T's new voicepipe, but these engines are otherwise untouched.

Like the Grand Touring, the new Ultimate trim taking the place of last year's Track trim is offered exclusively with the V6 engine, but it's unclear what transmissions may be available to it. For 2013 both 2.0T and 3.8 R-Spec models came only with the manual, and the Grand Touring came only with the automatic, but the Track and the rest of the lineup offered both, which indicates the Ultimate should, too. Other than the automatic becoming the standard and the new Ultimate replacing last year's Track trim, that arrangement isn't expected to change.

Typical of its class, the Genesis Coupe's back seat is best suited to friends of the 4-legged variety, but trunk space can be surprising at just 10 cubic feet. The rear bench folds down for an as-yet unknown increase in cargo capacity, so at least your stuff need not be cooped up if you're not stuffing people back there. However, the front is consistently touted as sufficiently comfortable for the tall, the small and the long haul.

Speaking of interior comforts, Hyundai is about the last maker to skimp on features. Even at its base, the Genesis Coupe comes equipped with features like 18-inch alloy wheels, a leather-wrapped tilt-and-telescoping steering wheel, Bluetooth connectivity and a 6-speaker stereo with CD player, satellite radio and USB input. Moving up a notch to the 2.0T Premium nets things like a sunroof, automatic climate control, powered driver seat, keyless ignition/entry, BlueLink telematics and a 10-speaker premium sound system with HD radio.

Those who are driven to drive will appreciate the R-Spec's firmed-up suspension, Brembo brakes, 19-inch alloy wheels, summer tires, enhanced front seats and limited-slip rear differential. The Grand Touring adds heated mirrors, rear parking sensors, leather upholstery and heated front seats, and the Ultimate should be equipped similarly to the 2013 Track, which upped its ante with xenon headlights, a rear spoiler and the R-Spec's performance upgrades.

What's your take on the 2014 Hyundai Genesis Coupe?

Marc I like the car but will only lease or purchase it if I can get a 6 speed stick if not I will not be interested in the car at all. I do not like automatic transmissions they are a deal breaker for me and make the car not fun to drive I have owned pretty much nothing but manuals thank you

Martin Bought a new 2014 2.0T Premium with the 8 spd. auto. it's Empire state gray. It is a beautiful auto and handles real well. It will put you in a jail in any of the 50 states for sure. Suspension is a little stiff, but it gives a comfortable ride on the highway. It will burn 87 Octane fuel, it just drops the HP a little. No more miles than I put on a car, I will burn premium fuel. I love the paddle shifter when in the manual mode. Only complaint I have is the BlueLink service. It will not sync with 85% of the smart phones out there. The remote features are usless for me.

Users ranked 2014 Hyundai Genesis Coupe against other cars which they drove/owned. Each ranking was based on 9 categories. Here is the summary of top rankings.

Have you driven a 2014 Hyundai Genesis Coupe?
Rank This Car

Have a issue Car has no boost at all goes to zero psi and doesn’t go any higher also only revs to about 4000rpm no check engine light on. I have checked all the clamps and intercooler fittings eve...

I need to know where this spring goes on this actuator.

How To Disable Seat Belt Chime

I have tried many things to disable this mechanism. However, the closest one that worked managed to light up the airbag alarm. I really need some help here. I broke the seat belt clasp and ever s...