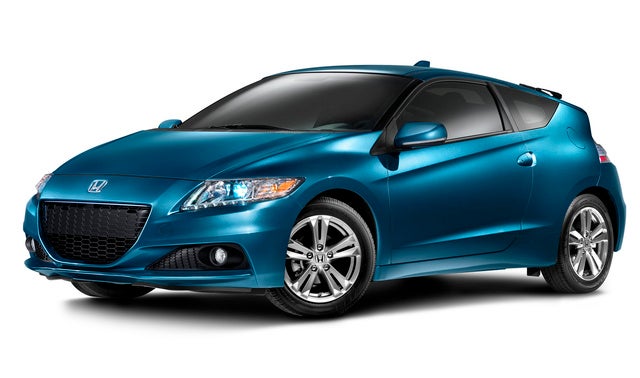 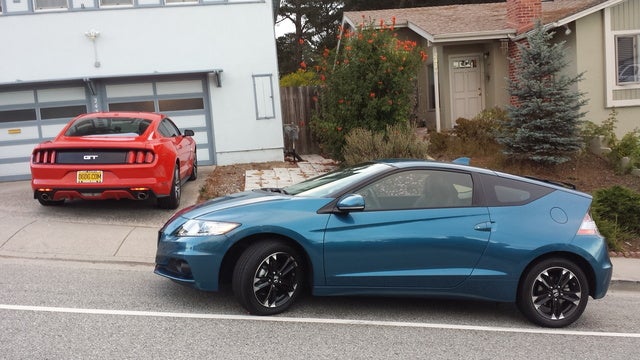 In a nod to its now-departed CRX mentor, Honda’s 2014 CR-Z attempts to offer a sporty yet commuter-oriented compact hybrid hatchback that is indeed sort of fun and certainly saves on gas. However, without a rear seat this down-sized gas/electric 3-door falls severely short on practicality. The 2-passenger seating returns complemented by a rear cargo bin with a fold-down divider that allows a total of only 25.1 cubic feet of toting capacity, thus pre-empting any sort of family vacation excursion, not to mention useful carpooling expectations. Sure, it looks wicked fast and street-savvy, but it is what it is: a low-budget, fuel-efficient urban gadabout.

In any case, this little hybrid is again offered in 2 trims, the entry-level CR-Z Base and the up-featured CR-Z EX. Should an available satellite-based navigation system be in order, the EX can be so equipped to beget the CR-Z EX with Navigation sub-trim. In the late spring of 2014, meantime, the Honda-idolatrous can be expected gain a reward with the CR-Z HPD (Honda Performance Division), a dedicated sports machine guaranteed… at least by Honda… to make you forget it’s still a hybrid hatchback.

Anyhow, sticking with the present, all 2014 CR-Z trims and sub-trims are available only with front-wheel drive (FWD), and each bears a 1.5-liter hybrid inline 4-cylinder (I4) gasoline engine mated with a 15kW electric motor to grind out 130 total horsepower. Standard in all trims is a 6-speed manual transmission that does give this Lamborghini-wanna-be a little kick on the open road while allowing 140 lb-ft of torque. Should this prove too exasperating for the downtown commute, a continuously variable transmission (CVT) with steering-wheel-mounted paddle shifters is an option in all CR-Zs, but torque drops to a mere 127 lb-ft. Mileage, meanwhile, is estimated at 31 mpg city/38 highway in stick-shift-equipped trims and climbs to 36/39 in CVT-toting editions.

The next-up EX sports, in addition to its Base compatriot’s goodies, heated outside mirrors, upgraded leather and simulated alloy cabin accents, and a 360-watt stereo with 7 speakers, including a subwoofer.

Options-wise, both trims are eligible for upsized 17-inch alloy wheels, while that satellite-linked navigation system with XM-radio traffic alerts and a multi-angle rear-view mirror, as well as a dashboard-mounted display, will result in the aforementioned CR-Z EX with Navigation.

Base Coupe with Premium Package