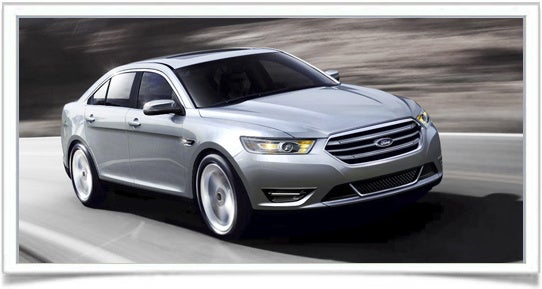 Average user score
4.8 ⁄ 5 stars
Based on 10 reviews
Sweet Ride, Looks Great by ekuziak — Fantastic looking car with a ton of options and a lots of space. Slightly disappointed in MPG at 26 compared to other Taurus's I have owned at 28. Like the touchless key options for doors and trunk. N... Read more
Ford Taurus Is The Way To Go For A Family Sedan!! by jessicaagee — I love my car! It was the best investment I have made. It handles awesome in the snow and overall has amazing handling and speed. I feel 100% safe putting my kids in the back seat and taking off on a... Read more
Review by Floyd — The car is great, the price is a little to high for me, but I love the car, thank you very much take care Read more 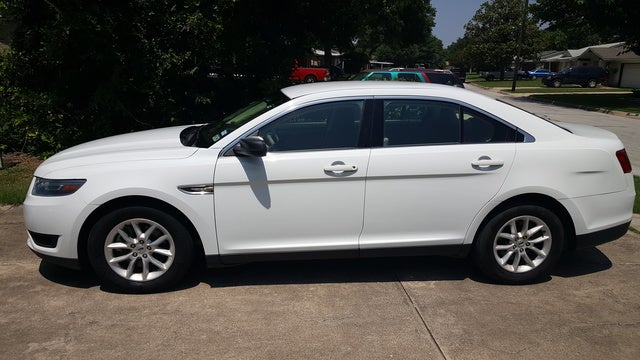 Completely redesigned in 2010 and refreshed last year, the 2014 Ford Taurus rolls out with barely a change. That's not a bad thing, considering the Taurus has done well in the full-size sedan market by offering a luxury ride and features as well as a more sporty option with the SHO trim.

After a disappointing run in the 2000s, Ford gave the Taurus a full makeover in 2010 with the square-lined styling that it still carries in 2014, a wider range of engine options, the reintroduction of the SHO trim and upgraded features and materials that helped Taurus become a family car with a luxury feel.

That new look got touched up in 2013 with changes to the grille, front fascia, wheels, front and rear lighting, rear fenders and the deck lid. The interior was upgraded with the Sync and MyFord systems (powered by Microsoft), as well as more acoustic insulation and higher-grade materials. Ford also improved the power and efficiency of the standard V6 and added an available turbocharged 4-cylinder that gets 26 mpg combined.

Considering all those recent reconfigurations, it might have felt like overkill if Ford had made more changes to the 2014 Taurus, so the blue oval basically left well enough alone. The noted exception is the available Lane Keeping System for the Limited and SHO trims, which generates steering-wheel vibrations that mimic rumble strips if it senses an unintentional lane departure.

The Taurus offers the smooth ride you'd expect from a large sedan, and it handles well enough thanks to technology like Ford's Torque Vectoring and Curve Control that help the Taurus through turns. Some big sedan buyers will shun the Taurus, because it doesn't offer a V8 option, but the standard 3.5-liter V6 does produce 288 horsepower and 254 lb-ft of torque while getting 19 mpg city/29 highway with front-wheel drive (FWD) and 18/26 with all-wheel drive (AWD). The 2.0-liter turbocharged I4 option, available only with FWD, generates 240 hp and 270 lb-ft of torque and gets 22/32. The SHO's 3.5-liter twin-turbo V6 with direct fuel injection churns out 365 horsepower and 350 lb-ft of torque, comes standard with AWD and gets 17/25.

While some of the more advanced safety features, like the lane-departure warning system, are only optional, the Taurus does have plenty of standard safety features on all trims—LED brakelights, automatic halogen headlights with washer, tire pressure monitor, antilock brakes, canopy system side curtain airbags and frontal and seat-mounted side airbags for the driver and passenger. Standard security features include illuminated entry, panic alarm and SecuriLock with ignition disable.

BAKO2285 I have a 2011 Taurus SEL and I really am thrilled with the vehicles handling and performance. It's got it when you need the kick in the behind. It does not just sit there on acceleration and has all the comfort you can get in a full size car. And this is the 3.5 liter V-6- 288 hp. The only downfall is,the rear of the car is raised quite considerably and it does help to have the back-up warning on, cause you are not gonna see anything out the rear window over the top of the trunk lid, GUARANTEED!

Rosco You may need to stop slouching in the seat! Im 5'1 and I see perfectly out the rear window. BALEEDAT!

Users ranked 2014 Ford Taurus against other cars which they drove/owned. Each ranking was based on 9 categories. Here is the summary of top rankings.

Have you driven a 2014 Ford Taurus?
Rank This Car

What Is The Cause Of Key Fob Malfunction, Clock Reset, And Door Unlocking?

So recently I purchased a 2014 Ford Taurus. I noticed a problem the first morning after taking it home. I went to unlock the car with the key fob and it wouldn't work (but will work fine after i st...

Using the key fob as well as the code on the door unlock all doors except the driver's door. Is this a bad actuator?

Drivers side light doesn't work. Even after changing with new bulb now when. Lights are on. No light high or low beam but when switching between them I hear a loud click

75 views with 15 answers (last answer about a month ago)

I want to put a SHO engine in my taurus. It's currently a 3.5 duratec 6spd with sportmode and awd. To me it looks like a SHO alredy. Let me know thanks

What Do I Do, And What Happened?

I have a 2014 Ford Taurus limited an I pressed the ignition button to turn my car off, everything blinked in the car then went black. now I can’t turn my car on. It has no power???