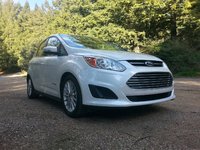 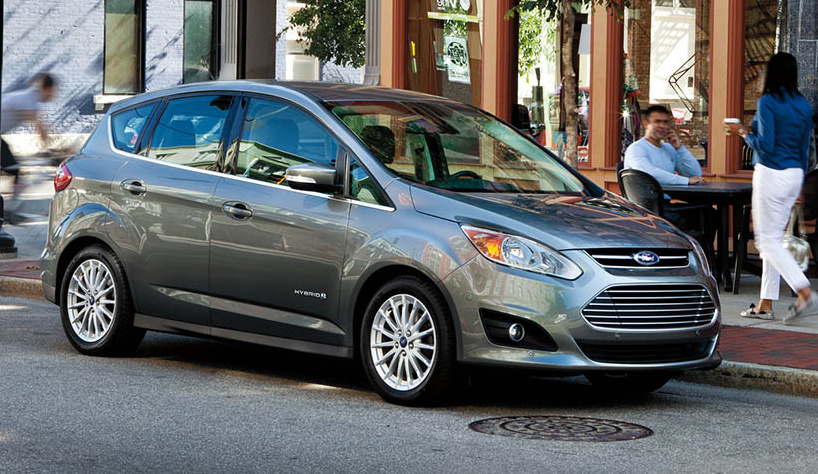 When Ford decided to enter the dedicated hybrid market, it knew it would have to offer something better than segment stalwart Toyota Prius. How else to make a dent in such a cemented position as America’s Favorite Hybrid? 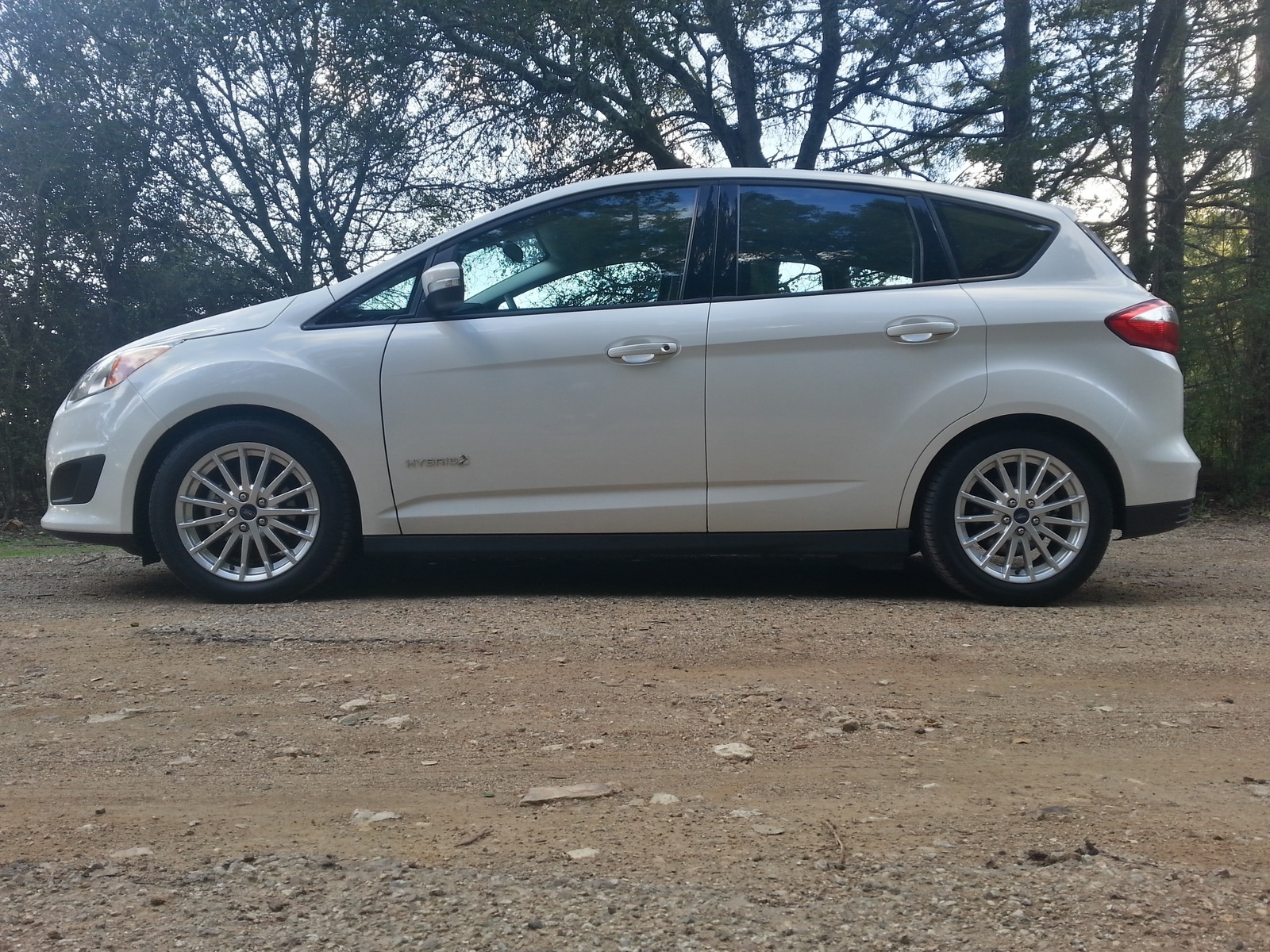 Ford's approach to tackling the hybrid hurdle meant putting a little zip in the trip with some spirited handling and extra refinement—characteristics ubiquitously missing from the Prius family. And while Ford hasn’t fully arrived at that goal, at least this hybrid is pointed in the right direction.

This is no small point, as Ford has chosen to let Toyota keep first place in what should be the most important selling factor for a hybrid: fuel economy. Stated clearly, the C-Max will not offer equivalent mileage to the Prius V. What it will offer is slightly more refinement and some actual driving enjoyment, and that may be enough to win the day.

For this test, Ford offered me a version in White Platinum Metallic ($595) with a charcoal black interior. The extremely sexy-sounding Equipment Group 203A ($2,290) was also included here, which adds a reverse sensing system and rear parking aid package, power liftgate, ambient interior lighting, and Sync/MyFord Touch with navigation, bringing the total cost with delivery ($825) to $28,880. 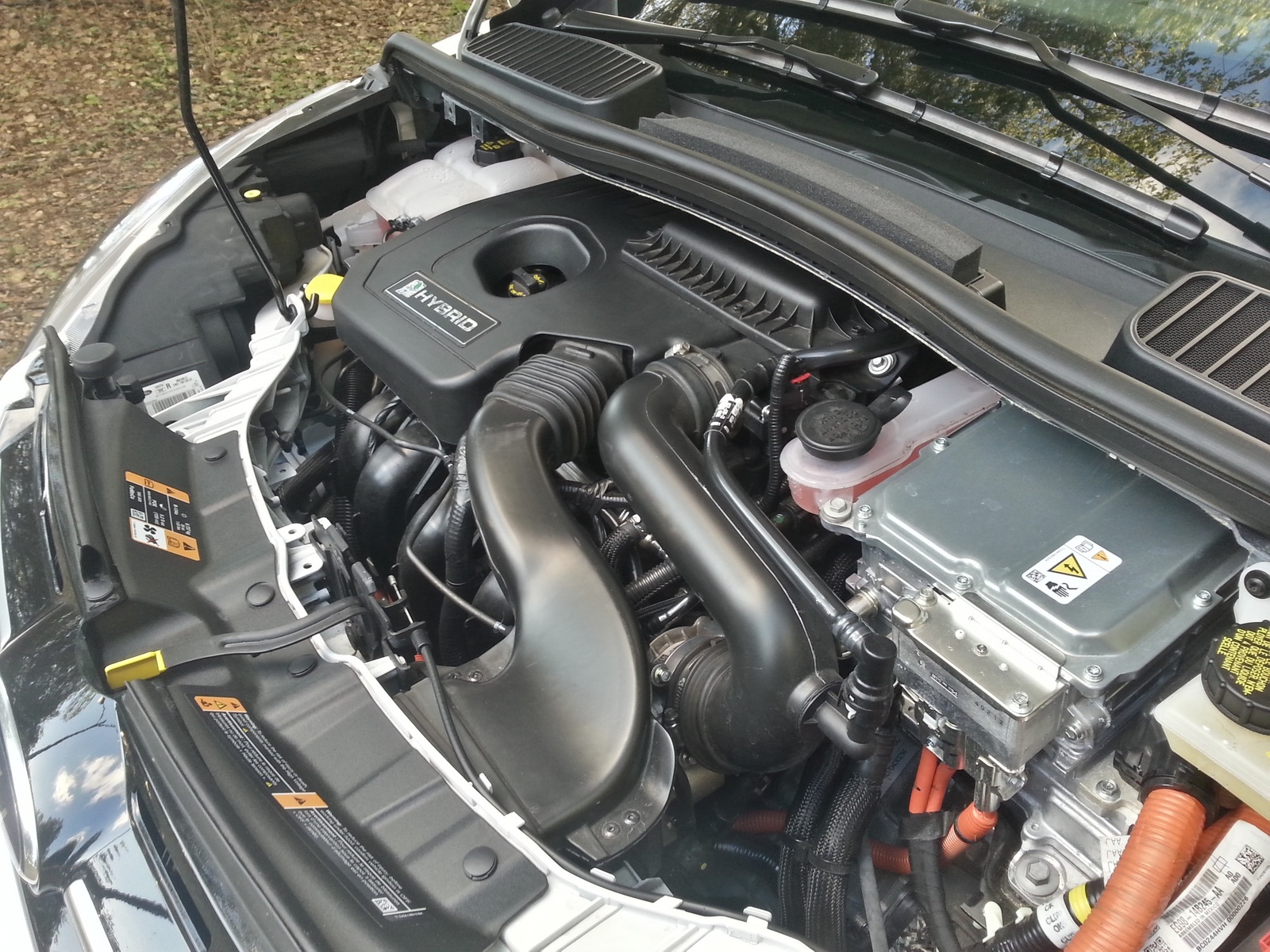 With a combined 188 hp to help motivate the C-Max, there is indeed a slight spring in the step of this hybrid. This of course must be considered with the appropriate supply of salt on hand, as despite its diminutive size, the C-Max has a nearly identical curb weight to the larger Fusion Hybrid. Still, the C-Max will scoot to 60 mph about 2 seconds quicker than a Prius (not that this is a particularly difficult challenge), getting there in just over 8 seconds.

If you’re trying to match those times, you’ll definitely notice a bit of gruffness from the engine/motor combination here as they struggle to supply the acceleration demands your right foot makes, but faster than the Prius V it is, even if it doesn’t exactly feel that way. The dual electric motors deliver a good amount of torque through a pleasantly quiet continuously variable transmission (CVT), and that trip to 60 is a much more refined affair here than in the Prius as well.

When it comes to turning, the C-Max has some more surprises for those scared away by previous hybrids. Just like the third-generation Focus, the current C-Max is built on Ford’s Global C platform—and this hybrid feels every bit as solid as the very impressive Focus. Whether turning or just plowing down the highway, the C-Max feels substantial. A not-inconsequential amount of weight down below in the form of batteries can’t hurt here, but the feel of this car going down the road shouldn’t be ignored. What’s more, the electric steering and regenerative brakes don’t have the same amount of disturbing modulation as I’ve experienced with the Fusion Hybrid, although there is still some grabbiness to the pedal at slow speeds.

Is it a fun car to drive? Not particularly. Could it be worse? Certainly, and it has been. This is a strong step in the right direction.

Of course, we’re ignoring the ecological elephant in the room: efficiency. The Prius V—the C-Max Hybrid’s only true competitor—offers 44 mpg city/40 highway compared to the C-Max’s 42/37. I was unable to achieve those figures reliably during my week with the C-Max, but I believe the extra power and refinement, and especially the steering and handling improvements, are all worth a few miles per gallon. 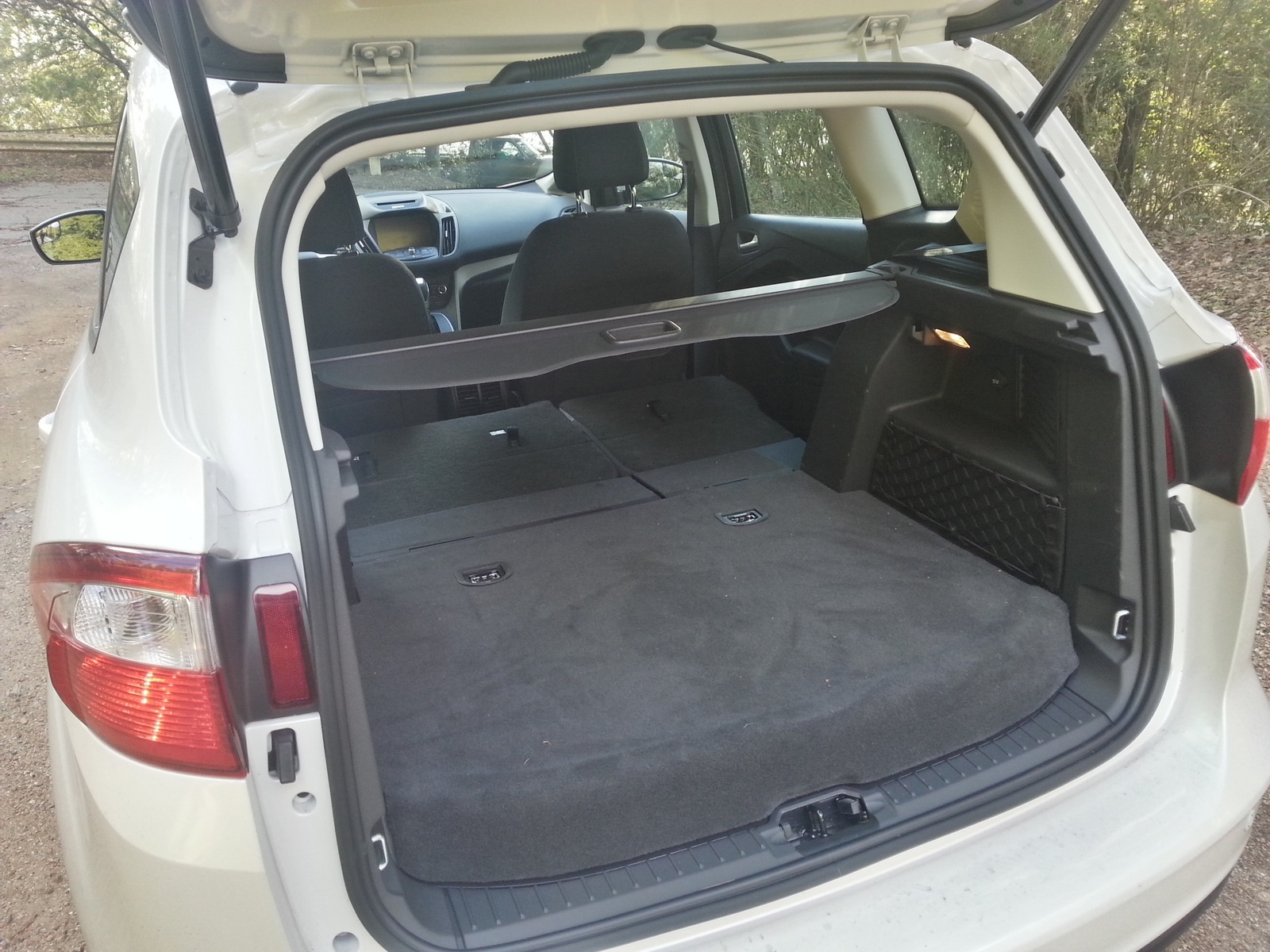 There’s nothing shocking here, and the C-Max is styled in much the same way as the visually similar Focus and Fusion. In fact, I had several people mistake this for the Focus during my week with the C-Max. This isn’t exactly a bad thing, especially if you’ve enjoyed the Aston-inspired styling from Ford of late. Even better, the aesthetic and fit improvements seen in the rest of the Ford lineup are reflected here, and the C-Max isn’t a bad place to spend some time in that regard.

Soft-touch surfaces are plentiful, but you won’t have a difficult time finding hard plastics, either. Satin-finish faux metal trim looks nice, but I wonder how well it will wear with time, and I had the same thoughts with the leather-wrapped steering wheel. Leather concerns aside, the wheel felt great in my hands, although the cruise and audio controls fell too far on the side of “cheap” for my tastes. There’s leather for the shift boot as well, which always seemed in the way for me. When in the Park position, it makes the climate controls nearly inaccessible. Otherwise, it just requires an awkward bending of the wrist. This is a hybrid with a CVT. Isn’t a lever a bit antiquated at this point? Give me some push buttons and another cupholder or two instead.

The seats looked very nice with contrast cloth and white stitching, but if I had one complaint, it's that I felt like I was falling out of them during more aggressive cornering. This could be considered more praise for the handling than criticism of the seats, I suppose. Rear seats fold flat, however, and double the storage of this compact crossover for a total of 52.6 cubic feet. It’s a very usable amount of space, but it should be noted that it falls about a dozen cubic feet short of competitors.

Deeply recessed gauges & screens behind the wheel are easy to read, but the whole unit is deliberately isolated from the rest of the dash, and this leaves it looking slightly tacked-on. Above the central touchscreen there’s a CD player and a badge announcing that the Ford Sync system is "Powered by Microsoft." This led to more than a few comments from passengers wondering about this strange partnership between Ford and Microsoft, I expect through confusion between “Sync” and the fact that this is a hybrid, which "syncs" two power delivery systems together?

My example was the SE trim, but a step up from that is the SEL, which would add fog lights, automatic wipers, keyless ignition & entry, an auto-dimming rear-view, and some upgraded seats with heat, 8-way power for the driver, and leather. All I’d really like to cherry-pick from that list would be the keyless ignition & entry and perhaps the fog lights, but your preferences might make this a worthwhile upgrade. 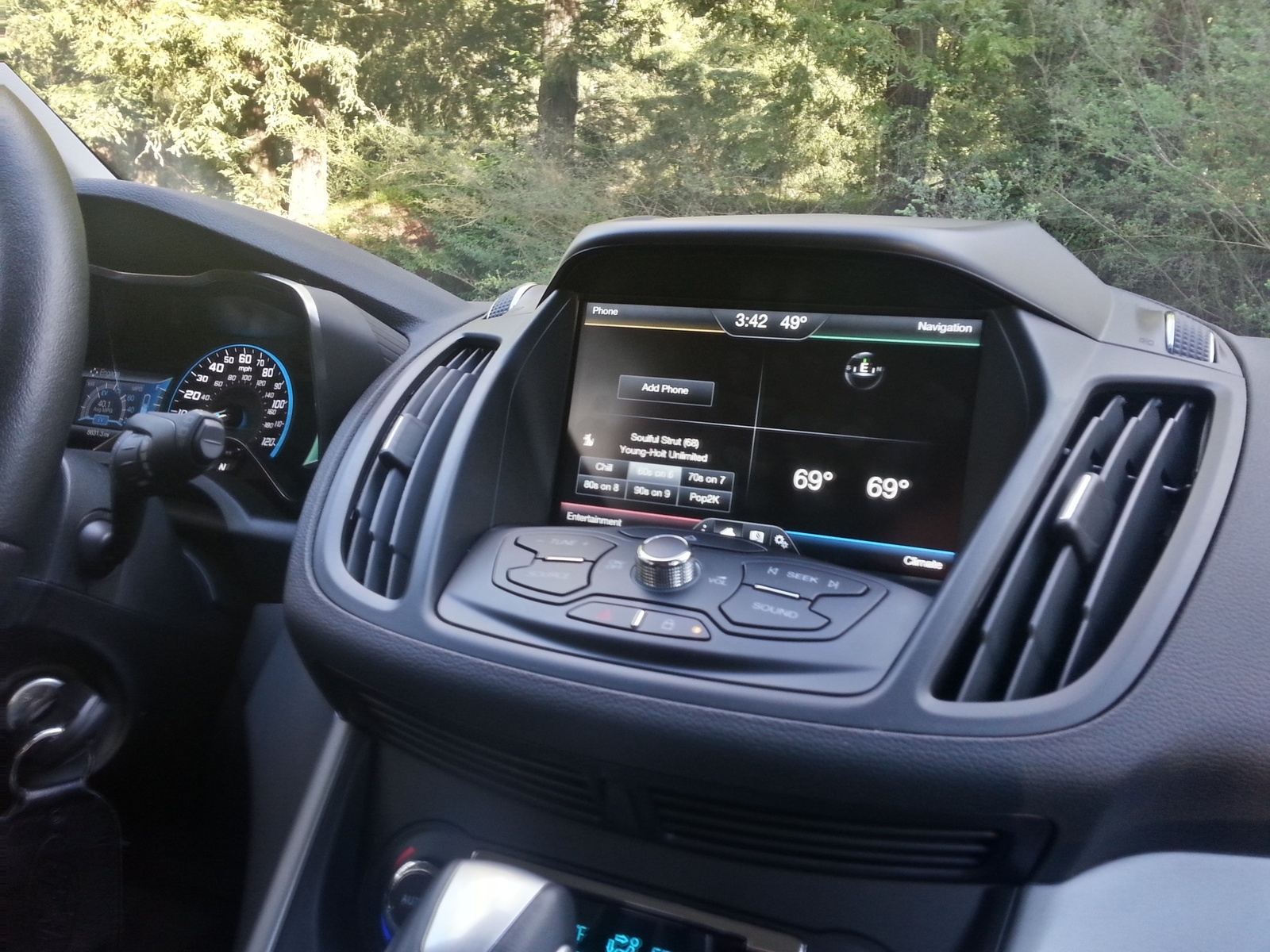 At the SE level the C-Max comes with full power, dual-zone automatic climate controls, a 110-volt outlet, a 6-speaker stereo, and the Sync system. This example came with all the extras and options available for the SE trim, conveniently and attractively named Equipment Group 203A. This added a power liftgate, rear parking aid and reverse-sensing system, color-changing ambient lighting, and the upgraded Sync/MyFord Touch system with navigation. Unfortunately, the Sync system is just as frustrating and the touchscreen just as laggy as in other Fords I’ve driven, but the satellite radio is a nice upgrade at least.

The power liftgate works perfectly, but don’t be fooled—this isn’t the same power liftgate operated with a wave of your foot like you saw in commercials. Here you’ll still have to put your groceries down and push some buttons. If you want the full upgrade, you’ll have to opt for the SEL and purchase some options. Same thing for a rear-view camera and front parking sensors.

There’s a lot of tech I wouldn’t bother paying for, but some of it is frustratingly saddled with other options. Fortunately you can forgo the navigation altogether at this trim level, and still check every other option available. You’re better off going with your phone navigation most likely, as I found the C-Max struggling to keep up turn-to-turn in the city and sometimes even exit-to-exit on the highway.

One special note: All C-Max trims come standard with MyKey, a feature that allows you to set speed and even volume limits for certain drivers. It’s marketed toward parents and aimed at teens, but I see no reason why this couldn’t be applied to a reckless and not particularly technologically savvy spouse just as effectively. Perhaps a way to cut down on periodic speeding tickets and court fees? 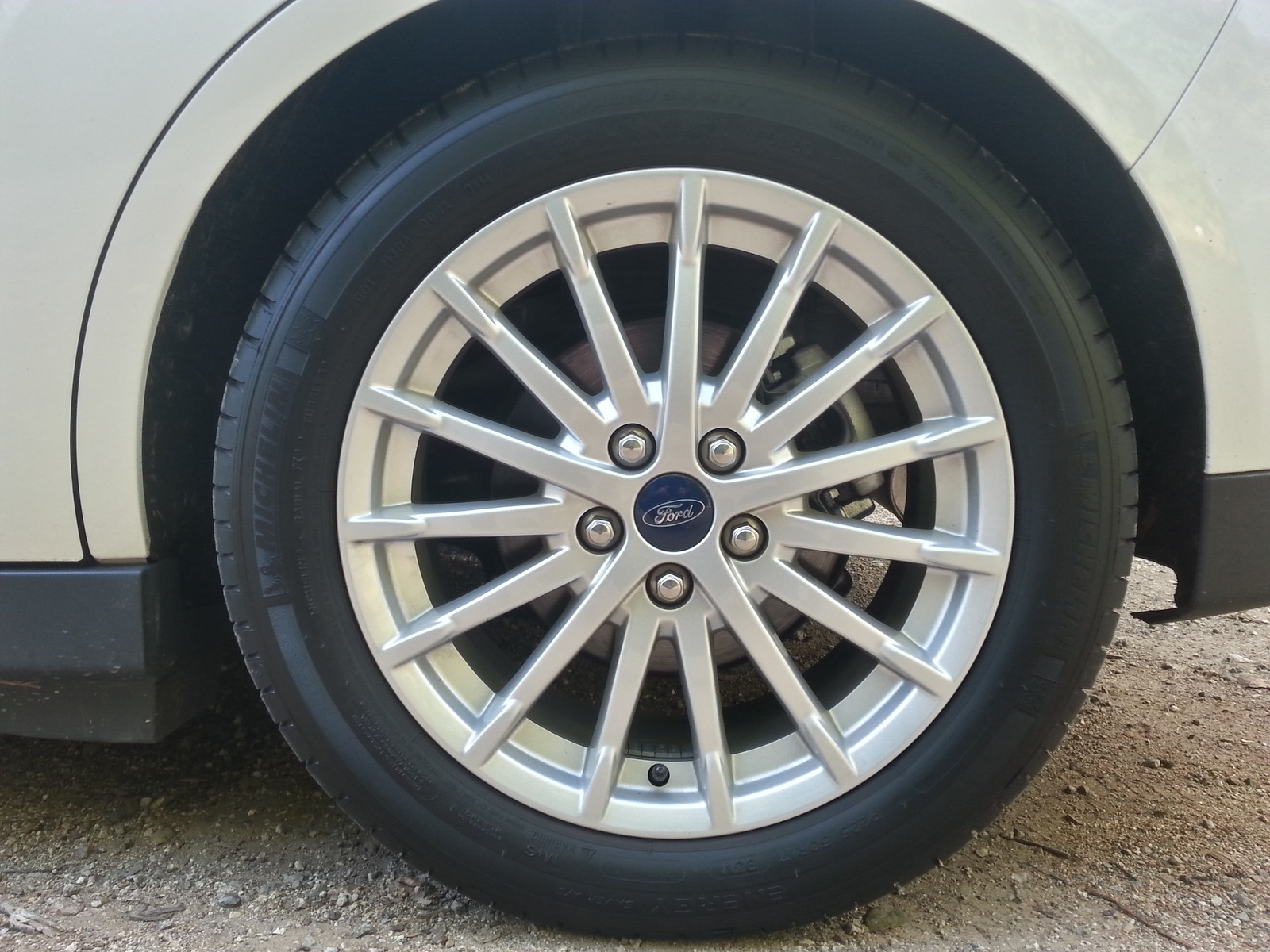 The C-Max Hybrid has all the standards of antilock disc brakes and traction and stability control, but supplements dual front and front-side airbags with full-length curtain bags and a driver’s knee bag. You’ll also get a post-crash alert system that will call 911 through your connected smartphone.

It was named a Top Safety Pick by the Insurance Institute for Highway Safety, earning top marks of Good in all tests excepting an Acceptable in the Small Overlap Front test. National Highway Traffic Safety Administration testing resulted in a 4-star rating, with only side impacts earning the C-Max 5 stars. The only disappointing statistic here is in braking, which clocks in at around 130 feet to stop from 60 mph. It’s not terrible, but it’s on the high side for the segment average. 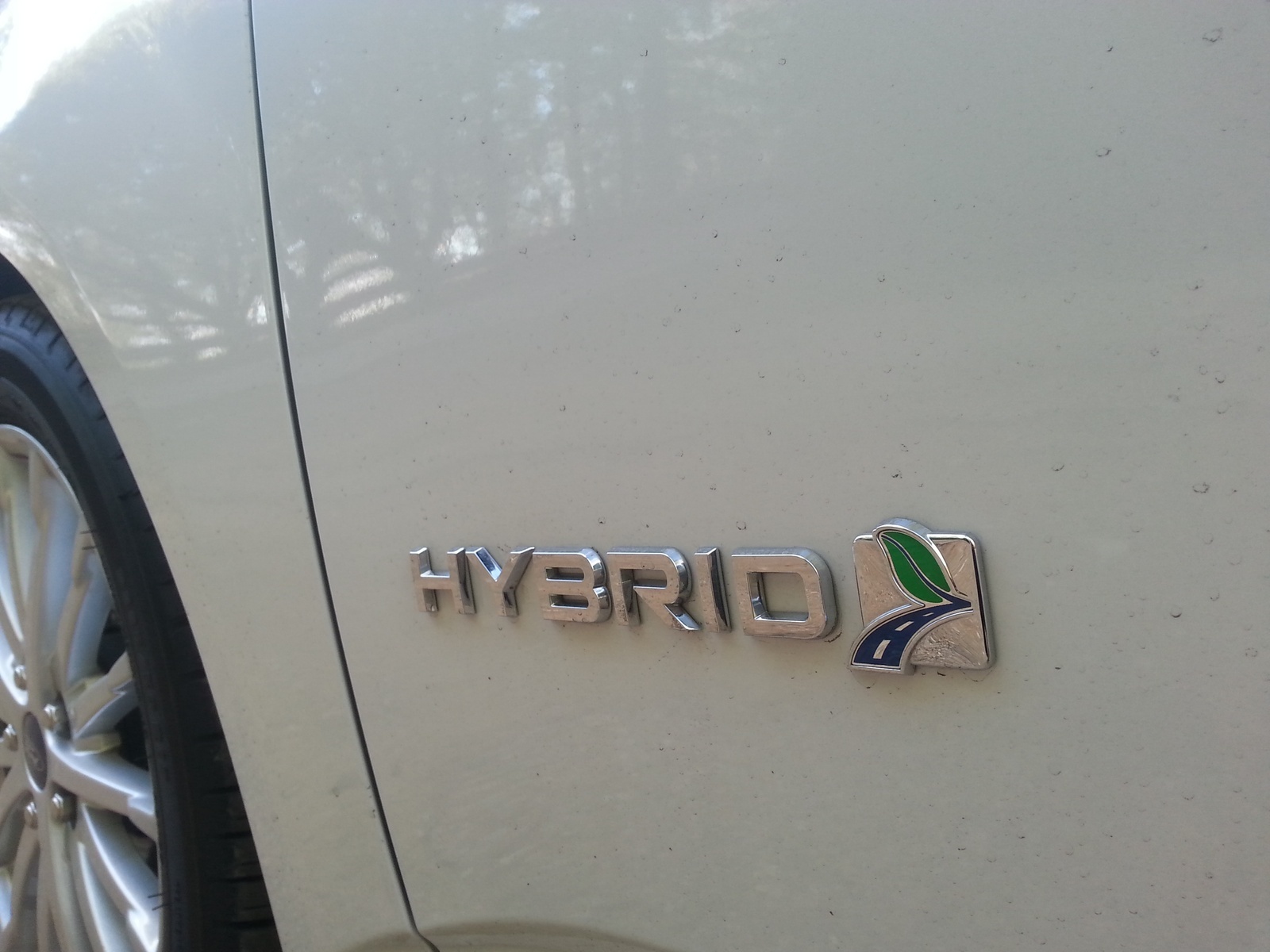 Even with the revised ratings (down from a previous estimate of 45/40) the C-Max will still save you some gas. However, with a combined rating of just 40 mpg, the argument in favor of a hybrid seems less secure, especially when real-world testing tends to produce numbers slightly less favorable. In my week of driving around northern California, I found myself much closer to the mid-30s during most trips, and at that point you’re getting close to some of the more fuel-efficient conventionally powered hatchbacks out there, which don’t come with the price premium of the hybrid or the extra weight and technological complexity.

But if you’re in the market for a hybrid compact crossover, this is the better of the two options by far.

Rick I have a 2013 SEL and at fill up at 530 miles or so always averaging. 44 mpg, on some commute days to work in combined city highway i get 52 mpg so this reviewer at mid 30 is doing something wrong. Watch your foot on accelerator, slow long braking is all you have to know

Users ranked 2014 Ford C-Max Energi against other cars which they drove/owned. Each ranking was based on 9 categories. Here is the summary of top rankings.

Have you driven a 2014 Ford C-Max Energi?
Rank This Car

What Is The Proper Tire Inflation For A C Max?

What is the tire inflation

888 views with 3 answers (last answer about a year ago)

Check Engine Symbol On The Engage Information Readout On Dadhboard

on a c max energi has a check engine on the ev engage on dashboard what does that mean? I have included a picture. Also there is a tire symbol lite up still after having the tires filled by a tire...