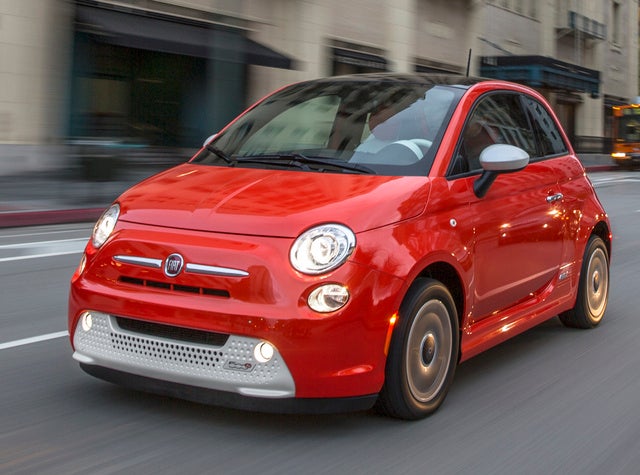 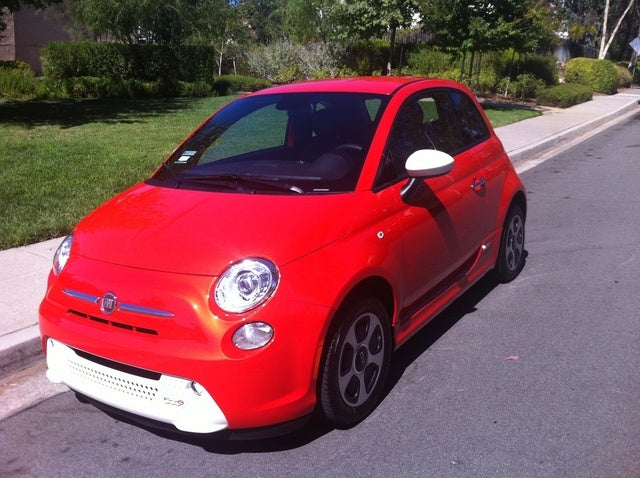 As all-electric as it is all-new for 2014, the FIAT 500e is a lot like a 500 Turbo but with a push-button transmission and estimated 87-mile range. Pressing the brakes will regenerate that range handsomely, so if you ask probably any current FIAT owner, all the hatch-only 500e needs next are a convertible and an Abarth hybrid.

For now, no charge means no-go, and it'll take about 4 hours to recharge on a 240-volt outlet, or "less than 24 hours" on a standard 120-volt household circuit—and it's still a dashing charmer. “Dashing” for its 9-second sprint to 60 mph, and a charmer not just because of FIAT's hard-won praise in recent years. The Fit EV also has a range estimated by the EPA, but it's 5 miles shorter, and every other major competitor is no less than 10 miles short of the FIAT 500e with equally incomparable highway benchmarks.

Stray from the Honda, Nissan and Ford options, and there will certainly be sacrifices in interior quality and overall build—but none of those will drive like a FIAT, nor look as relatively normal either. Just a contrasting skirt and rear spoiler differentiate the 500e's body from the gas-powered variety, which is arguably quirky in its own right, but for an electric the stylistic consistency is a refreshing change.

Melting even the hearts of MINI owners in 500 Abarth form for that irresistible roar combined with FIAT driving dynamics, this 500e promises an equally exhilarating ride, and to judge by early testers, just might deliver. So far touted as driving no differently than its gas-powered brethren, the 500e's 83kW electric motor ponies up 111 instantaneous horses—not too far from the 500 Turbo's 135 hp and matching up a little better on torque, with 147 in the 500e and 150 lb-ft of it for the Turbo.

But of course any electric motor will convert maximum power to the road far faster than any gas motor, let alone a turbocharged one. Meaning, the 500e should sprint to 60 mph in something closer to the Turbo's 8 seconds, even though FIAT promises 9. Otherwise, this 500e is equipped much like a fully loaded top-shelf 500 Lounge, including its heated front seats and auto-dimming rear-view but, as an example, stepping the leather upholstery down a notch to leatherette-and-cloth in the 500e.

The overall interior is nevertheless a step up from anything Toyota might offer in its Prius line, nevermind standard. This FIAT is thus far offered in one well-appointed trim, and standard feature highlights include heated mirrors, solar-tinted glass, keyless entry, automatic climate control, a leather-wrapped tilt-only steering wheel, 50/50 split-folding rear seats, rear parking sensors, a detachable 4.3-inch touchscreen TomTom navigation system that can find a nearby charging station in real time and an Alpine audio system complete with CD player and connectivity with satellite radio, auxiliary and USB devices.

The only catch is that all this equipment comes at a price not at all close to even the 500 Abarth's asking tag. Starting at over $30,000, the 500e is at least $10,000 more costly than its high-performance brother, but FIAT is offering several specials to offset those costs at least for this debut year. Perks include free points at Enterprise if you need a long-range rental, and the maker is even extending discounts above and beyond state and local governments' for pure-electric vehicles to bring that price down significantly.

Users ranked 2014 FIAT 500e against other cars which they drove/owned. Each ranking was based on 9 categories. Here is the summary of top rankings.