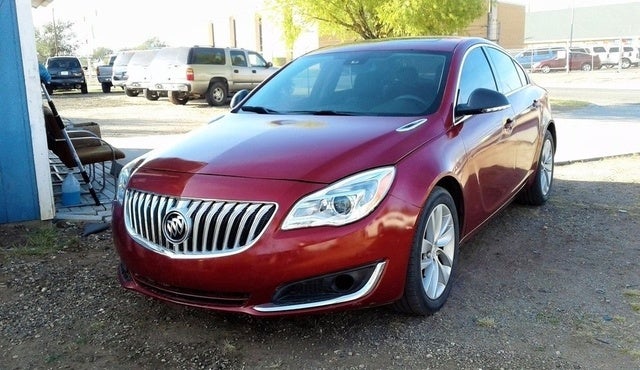 Buick brings the Regal to its refreshing spa to get much of the same treatment as its LaCrosse big brother, but with a bit more exfoliation for this first facelift since its 2011 rebirth. Like the LaCrosse for 2014, this Regal is endowed with a youthful appearance and cleared of its center-stack acne, but also garners drivetrain and powertrain improvements to more aptly represent a sporting midsize version of the full-size LaCrosse Touring. Most notably shaving a half-second off its top-tier zip-to-60 time in this refresh, the 2014 Regal just might hit that sweet spot yet—if it passes the real-world test.

Drivers definitely noticed the Regal's not-so-royal treatment of its 5 passengers since the 2011 debut of this fifth generation, complaining of tight rear quarters, a busier-than-luxury ride, sluggish turbo performance and lackluster fuel economy year after year on top of complaints shared with the LaCrosse regarding its complicated media and climate controls. Early LaCrosse testers are quite pleased with the center stack's tech-infused refinements, but so far nobody has their hands on a 2014 Regal to let us know exactly how the new engine, suspension and available all-wheel drive (AWD) affect its tarmac-tried performance.

That said, the Regal is touted as a luxury sport sedan—not to be confused with a luxury sedan lacking that “sport” moniker. It is not simply a smaller version of the LaCrosse—it is also a more sporting version.

To that end, rear seating hasn't changed a lick, and you can safely expect the 2014's suspension tweaks—including the new mode selector in the top-shelf GS—to only add a touch of touring flavor. Anything more would belie its strut-based construction, which is still not as independent as you might expect of other Buicks, even and especially in all-wheel-drive (AWD) vehicles.

While 2014 buyers may not notice improved ride comfort, engagement will almost certainly be another story altogether. The maker's latest turbo engine, debuted first in the 2013 Cadillac ATS and also used in the 2014 Chevrolet Malibu, provides the mid-level Regal Turbo and kingly Regal GS all the outgoing GS's 295 lb-ft of torque at 700 fewer rpm. That drops the 2014 GS's zip-to-60 from 6.9 seconds to 6.4 in spite of an apparent loss of horsepower year over year.

This new 2-liter turbo 4-cylinder offers up 259 hp otherwise—10 horses shy of last year's GS—but fuel economy is expected to improve from 16 mpg city/30 highway to 21/30 for front-wheel drive (FWD) models, thanks largely to that broadened power band starting at 1,700 rpm. Yes, that means the Turbo can do it, too, and technically its gains are more impressive, but frankly it's depressing if you were eyeballing that GS.

Perhaps as consolation the GS exclusively offers a 6-speed manual for 2014 in addition to the 6-speed manual-automatic now included in the rest of the lineup, but only automatic-equipped Regal trims with the turbo engine will have the option of AWD. This system uses a center differential to redirect as much as 90% of power to the rear axle, the GS also utilizing Buick's HiPer strut system to ease torque kicks and hooks into the brakes as a limited-slip rear differential regardless of drivetrain, but only for the GS.

In short, the GS remains the favorite for double duty, but other than price there's little incentive left to go for the Turbo instead, since the pair now uses the same powertrain and there's actually some benefit to going “boring” in the fun one. In any case the “mid-hybrid” 2.4-liter eAssist-powered base trim has its definitive perks—namely gas savings to the sweet tune of 25/36 with a full 10 seconds to enjoy the view up to 60 mph—so it's bound to be a staple for some time even though it's quite the underdog, being good for just 182 hp and 172 lb-ft of torque in the Regal.

Either engine performs just as well on regular fuel, leaving plenty of room in the budget for any of Buick's available upgrades, ranging from Premium 1 through Premium 3, depending on where you buy into the lineup. Feature content, both optional and standard other than that new touchscreen in the center stack capable of natural language recognition, is expected to carry over relatively unchanged.

Users ranked 2014 Buick Regal against other cars which they drove/owned. Each ranking was based on 9 categories. Here is the summary of top rankings.

Have you driven a 2014 Buick Regal?
Rank This Car

2014 Buick regal cuts off while I'm driving or at stop light check engine light on. What could it be?

When Starting Rpm Is 1 Instead Of 0

How To Start After Stalled Out In Water