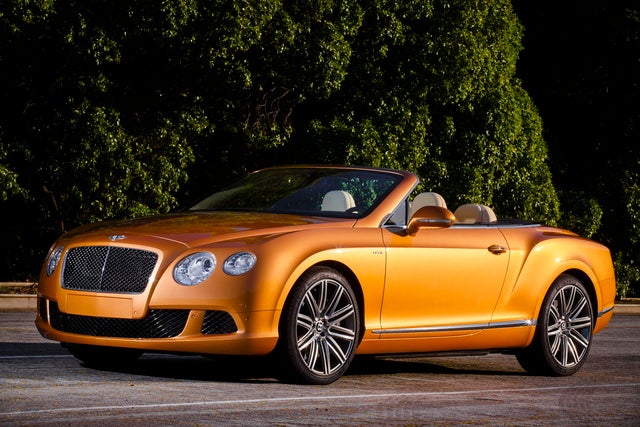 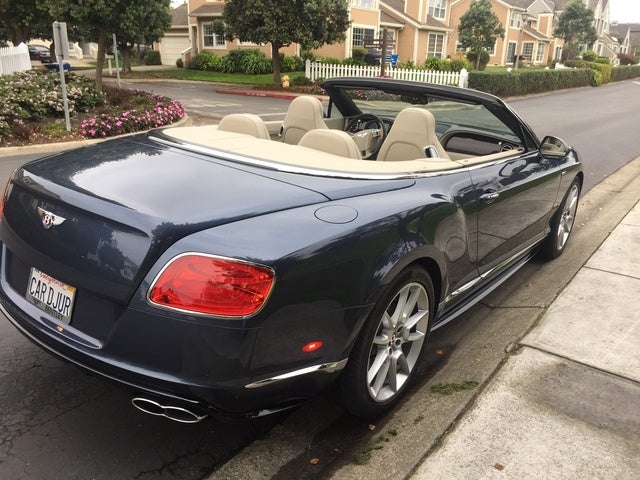 Bentley finally pays off its Continental promissory note with the delivery of a GTC Speed for 2014 to round out its V8 and Base W12 offering. Pounding out the same 616 ponies and 590 lb-ft/torque through the same 8-speed ZF shiftable automatic as every other Speed variant, the GTC Speed predictably and most noticeably differs from its hard-topped brethren in its 9 cubic feet for cargo, shared with the rest of the convertible lineup. Otherwise the GTC continues into 2014 much as it entered 2013, completely missing out on the coupe's Le Mans celebrations.

Touted by Bentley's chairman as the world's fastest 4-seat soft-top "designed for those who accept no compromise," this GTC Speed is technically a second-generation edition come early. New engine management computers together with Audi's transmission tech reportedly improve fuel economy by as much as 15% over the first-generation GT Speed's—which would calculate out to 12 mpg city/20 highway over the previous version's 11/18, or the same as any regular GT with the W12 by the latest estimates. This one, too, is flex-fuel capable, but expect a 5-10 mpg drop in efficiency.

Evolved as the tech under the hood may be, the interior still boasts current configurations as opposed to the innovative driver considerations and technology updates in the redesigned 2014 Flying Spur. Given this Speed's “early” arrival with next-gen mechanicals and the coupe's new cosmetic limited editions for 2014, expect the Flying Spur's changes to make their way to the GT and GTC lineups perhaps as soon as 2015, but likely without the Spur's softened springs. Bentley wouldn't want to spoil this year-round entertainer's ease with double sport-touring duty.

Speaking of which, this isn't your average soft top. Tested in conditions ranging from -22 to 122 degrees Fahrenheit in even torrential rain, this 4-layer topper is true to its word of sealing the outside world solidly outside with the push of a button. Not even a draft makes it by these threads. Being a convertible, trunk space is an expected sticking point, but you can fit a golf bag in there with the top down.

As with every Conti, every GTC variant uses a 40/60 rear-biased all-wheel drivetrain choreographed through a 6-speed shiftable automatic for the base W12 and V8, or an 8-speed for the W12 in Speed editions. Fuel efficiency is almost identical between the two W12 versions, although the base produces only 567 hp and 516 lb-ft of torque—the only real difference between the pair being a 0.8-second spread between it and the Speed's 4-second sprint to 60 mph. The 500 hp and 486 lb-ft/torque V8 does the same in 4.2 seconds and though it won't stomach Flex-fuel, it reportedly manages 15/24. These figures suspiciously match the coupe's, though, so expect differences in real-world performance.

True to form Bentley offers a dizzying array of over a dozen color choices, resulting in hundreds of possible custom combinations before shelling out anything extra, and features mirror what you would find in any hard-topped Continental, the Flying Spur now excepted. Look forward to dual rear LCD screens and a detachable touchscreen remote when this Conti is ready to roll with the Spur's updates.

What's your take on the 2014 Bentley Continental GTC?

Have you driven a 2014 Bentley Continental GTC?
Rank This Car