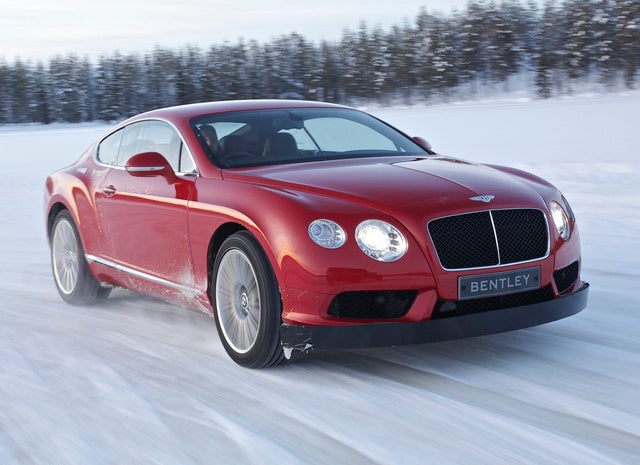 Bentley keeps the spotlight on the Continental GT coupe for 2014 with a 10th anniversary Le Mans victory special edition, but otherwise stays the course it blazed so well for the last decade. This limited edition is almost entirely skin-deep, however, adding just a touch of sport tuning to the suspension and steering—not that it needed bolstering, but the package's “diamond-quilted hide door panels” probably add enough weight on their own to merit some tweaking to keep its historically even keel. Those are some big doors to fill.

Regardless, the debut of such a cosmetic option set for 2014 can mean only one thing: Bentley has something up its sleeve for 2015. Unfortunately, Bentley also sets the standard for keeping secrets in luxury automaking, and not even a single photo has leaked about any solid potentials. The GT3 is probably going to stay just a circuit prototype, the convertible lineup is complete for 2014 with the addition of a GTC Speed, and pretty much the rest of the buzz goes to rumors of Bentley's first SUV.

Nobody even dares speculate what Bentley could be planning for the Continental GT's anticipated day at the spa for 2015, because the maker is just that good at keeping secrets and putting on a good surprise. Well, let me tell you it's safe to expect a completely new skin, a completely redesigned interior and a massive technology influx, but no changes to its overall driving dynamics or power.

With the exception of keeping a more sporting feel for the Conti Coupe, it just makes sense Bentley would carry 2014 innovations over from its also-driver-oriented Flying Spur 4-door while further differentiating their looks—especially if continued rumors of a coupe-like 4-door in the works means there's another GT rendition on the way that we haven't even glimpsed yet. No, not another Flying Spur made yet more coupe-like. Another Continental, which is a family Bentley insists the Flying Spur divorced this year for reasons that so far make little sense. Surely Bentley's genius will reveal itself eventually.

For now, the Base GT still uses the same 6-liter twin-turbo W12 good for 567 hp and 516 lb-ft of torque through a 6-speed shiftable automatic, the GT Speed upgrading that to 616 hp and 590 lb-ft of torque with 2 additional gears, and the GT V8 toddles into its second year with the same stellar 500 hp and 486 lb-ft/torque out of its 4-liter twin-turbo V8 engine shuttled through the 6-speed. All-wheel drive with a rear-wheel 40/60 default bias is the standard drivetrain regardless.

Technically faster than the W12 in its base setup and certainly more fuel efficient either way, that V8 roars up to highway speed in a deceptively quick 4.2 seconds—the base GT doing the same zip to 60 mph benchmark in 4.7 seconds, while the GT Speed blazes a 4-second trail. As can be expected, this Conti prefers a diet of premium fuel, and it's thirsty, requiring as much as 12 mpg city/19 highway to motor about with the W12 on either transmission, or 15/24 with the V8. The W12 can also dine on E85, but expect at least 5-10 mpg less mileage.

Each trim differs basically in powertrain alone, though the W12 also gets a trunk pass-through, privacy phone and dual front armrests. Otherwise every trim is very well-appointed with features like 20-inch alloy wheels, a speed-sensitive hidden rear spoiler, heated and power-folding mirrors, parking sensors and essentially everything you would expect in any other entry-level luxe coupe. Features such as adaptive cruise control, a rear-view camera, ventilated and massaging front seats and W12 standards are optional across the board.

What's your take on the 2014 Bentley Continental GT?

Have you driven a 2014 Bentley Continental GT?
Rank This Car

How Do I Add Or Adjust The Price On My Ad??

i have an ad, i want to change the price and add some description