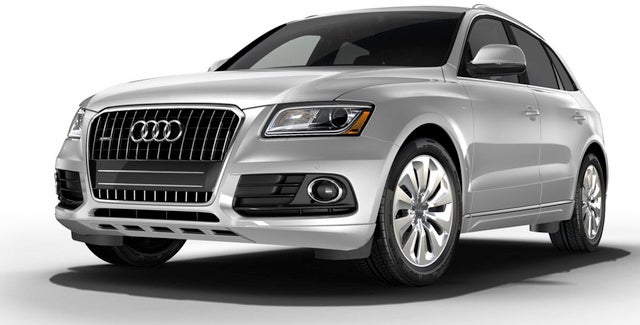 Audi's hybridized compact crossover stands its ground for 2014, gaining just the same “advanced key” standard as the rest of Audi's top-shelf Prestige trims—but that ground has a great view. There are no exact figures on just how much the Q5 Hybrid's debut impacted the Q5's overall claim to fame over the course of 2013, but this lineup outsold the maker's usual A4 leader and the Q5's 2012 model year by as much as half. Perhaps being rated in the top 3 of each of its 3 segments—luxury compact SUV, luxury 2-row SUV and luxury crossover SUV—might have something to do with that.

Equipped with the very same famed all-wheel-drive Quattro drivetrain and 8-speed shiftable automatic as the rest of the Q lineup and overall differentiating in very subtle ways, the Q5 Hybrid amazingly manages to avoid all the usual downsides to going hybrid while offering a very compelling argument for doing just that. It especially shines for an engineering feat: leaving all 29.1 cubic feet behind the non-hybrid's seats unabridged, meaning max capacity is also still 57.3 cubic feet for the Q5 Hybrid.

Available only with the modified 2.0T engine in Prestige trim, the Hybrid is otherwise just as you would expect of any other Q5 Prestige, from performance to feature content, except for a slightly smaller asking price than a traditional 3.0 Prestige and boosted fuel economy estimates of around 24 mpg city/30 highway, instead of the premium-gas 3.0T's 18/26 and new-for-2014 3.0 TDI's very comparable 24/31 (if you don't mind the TDI's higher asking price and clean-diesel diet).

In contrast to the base 2.0T engine estimated for 20/28 mpg and a zip-to-60 of 6.8 seconds, the Hybrid's electric motor adds 34 horses and nearly 100 lb-ft of torque for a total output of 245 hp and 354 lb-ft/torque, but supposedly the same 60-mph benchmark results. Drivers say in the end, the Hybrid's performance is almost imperceptibly different from the 3.0T's mix of more ponies and less torque, and it reportedly comes with the same 4,400-pound tow rating, too, but Audi's information is woefully under-informative on these matters.