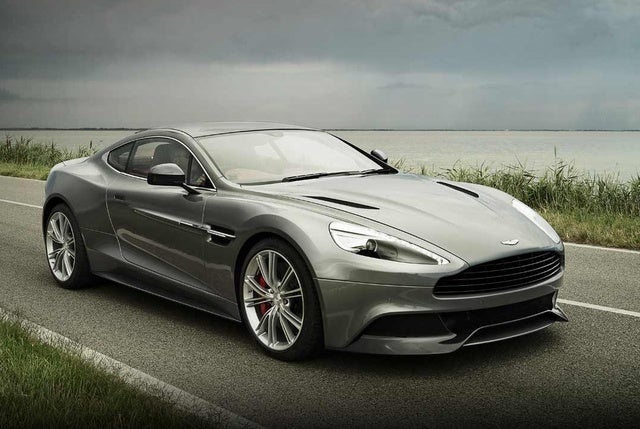 One of the world's more rarefied sport coupes, the Aston Martin Vanquish continues to turn heads for 2014. Designed to commemorate the British automaker's 100-year anniversary, and currently Aston Martin's flagship model, the Vanquish debuted in 2013 as a replacement for the DBS, which in turn replaced an earlier version of the Vanquish, produced from 2002 to 2006. The latest iteration of the Vanquish features an evolutionary rather than a revolutionary exterior design, lightweight carbon-fiber body panels, a more powerful V12 engine, a lowered stance, a full leather interior and a number of tech upgrades, including touch-sensitive haptic buttons on the console, which provide sensory feedback through the fingertips.

While it doesn't quite achieve supercar status, the 2014 Vanquish certainly rules the road, delivering a sporty yet elegant and refined driving experience, as expected from a British grand touring coupe with more than a few ties to the sophisticated spy James Bond (the original Vanquish was prominently featured in a Bond movie). Competitive vehicles from Ferrari, Porsche and Mercedes-Benz may jump off the mark a split-second quicker and take tight turns with slightly more confidence, but the Vanquish makes a definite statement on the open road, augmented by a pleasing exhaust note that sings sweeter than any current pop star.

A large, wide car, the new Vanquish sits slightly lower than its predecessor, and Aston Martin moved the V12 a little further back in the aluminum chassis in an effort to improve balance and handling. In creating the exterior design, the automaker drew styling cues from the DBS as well as the Aston Martin One-77, a limited-edition sport coupe that saw only 77 units produced and sold (hence the name), starting in 2011. The Vanquish's domed, fierce-looking titanium hood closely resembles the one on the DBS, but Aston Martin toned down the open-mouthed look at the front end, though the aluminum grille still makes a distinctive statement, with its upside-down grin. Large air ducts, a prominent front-lip spoiler on the lower fascia and prominent wheel arches add to the sporty look.

Carbon-fiber body panels, as well as an underskin of carbon-fiber weave, help reduce flex and overall weight, though the Vanquish still tips the scales at a rather hefty 3,897 pounds. In addition, the carbon-fiber skin allowed the designers to use more flowing exterior lines, with larger body panels and fewer weld points. With a low cabin, tapering roofline, aerodynamic chrome side strakes and high sidelines that descend slightly before rising at the hip over the rear wheels, the Vanquish appears ready to pounce on the road. Sweptback HID headlights, power-folding heated side mirrors, LED taillights and chrome exhaust tips are among the other exterior features. A wide variety of exterior options include a black-vaned grille and exposed carbon-fiber side strakes and door handles, as well as an exposed carbon-fiber roof panel, which provide an even more visceral appearance.

Under the hood, Aston Martin installs a new AM11 Gen4 all-alloy, naturally aspirated V12 as the beast's beating heart. It drives the Vanquish through the rear wheels and ranks as the most powerful Aston Martin engine to date. A number of reviewers note that although the automaker labels the V12 as a 6.0-liter powerplant, it actually displaces 5.9 liters (5,935 cc). Still, it puts out an impressive 565 hp at 6,750 rpm and 457 lb-ft of peak torque at 5,500 rpm. That's good enough to drive the Vanquish from 0-60 in an official 4.1 seconds, though independent testing puts it at an even 4 seconds. Top speed is limited to 183 mph. Aston Martin mounts the V12 behind the front axle and close to the engine bay's firewall, which classifies it as a front mid-mounted placement.

The V12 mates with a 6-speed Touchtronic 2 automatic transmission with Sport and manual-shift modes, as well as steering-wheel-mounted paddle shifters. Aston Martin does not offer a manual shifter in the Vanquish, although it does equip the vehicle with a Launch Control mode, which enables drivers to engage in rapid acceleration from a standstill. Fuel economy numbers aren't as dismal as one would assume for such a beefy engine, checking in at 13.2 mpg city/27.7 highway, making for a combined 19.6 mpg.

Testers say the Vanquish stays firmly planted to the road and excels as a grand tourer, rather than as a flat-out speed demon, like such vehicles as the Ferrari F12 Berlinetta. That's due in part to the Vanquish's perfect 50:50 front-to-rear weight distribution, as well as its lightweight aluminum chassis, which incorporates some carbon-fiber components to add strength and rigidity. Like all Aston Martins, the Vanquish rides on a VH platform, although it's been upgraded with revised control arms, ball joints and bushings for improved ride and handling. In addition, the automaker retuned the springs, dampers and anti-roll bars to ensure good manners at any speed. A rear limited-slip differential comes standard, along with an Adaptive Damping System, which offers driver-selectable Normal, Sport and Track modes. It integrates with a 3-stage Dynamic Stability Control system, also with Normal, Sport and Track modes. Speed-variable electronically controlled power steering offers good feedback and a precise feel, testers say, though some find the thick sport steering wheel a bit clunky. Carbon ceramic brakes with Brembo discs provide good stopping power. The Vanquish rides on 20-inch wheels with a choice of 10- and 20-spoke designs, and standard Pirelli P Zero tires.

Owners can configure the Vanquish with either a 2-passenger or 2+2 seating arrangement. The 2-passenger configuration replaces the rear seat with a storage area. A flowing center stack, redesigned for the new Vanquish, dominates the Vanquish's cabin, which offers more interior space than the DBS's. The console features a 6.5-inch pop-up display screen and new haptic touch-sensitive glass buttons. The first of their kind in an automotive application, they provide feedback through the fingertips to help drivers achieve the right settings. The automaker's AMi (Aston Martin infotainment) system features a new joystick controller, used in part to manage the 13-speaker, 1,000-watt Bang & Olufsen audio system, which includes Bluetooth, satellite radio and an iPod port. Owners can add navigation as an option.

The Vanquish comes equipped with 6 airbags, including dual front, front seat-mounted and side curtain airbags. Antilock brakes with brake assist and electronic brakeforce distribution are also included, along with traction control and Aston Martin's Dynamic Stability Control system with a track mode for a sportier driving experience.

What's your take on the 2014 Aston Martin Vanquish?

Have you driven a 2014 Aston Martin Vanquish?
Rank This Car