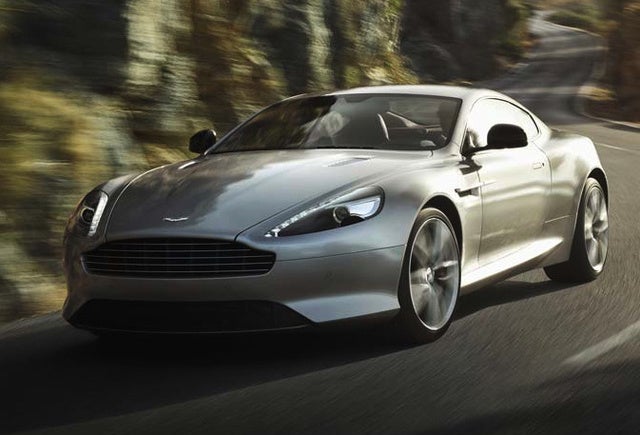 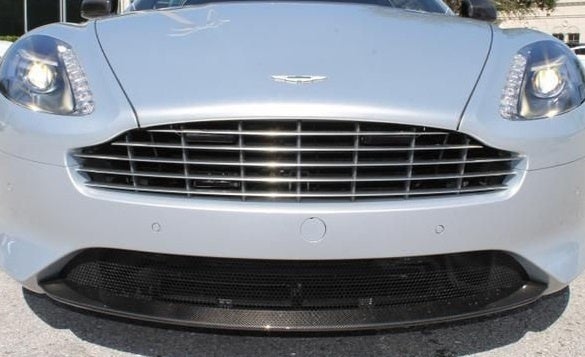 Following an update in 2013, which included revised exterior styling, an updated suspension, a few new interior features and a bump in horsepower, the Aston Martin DB9 cools its heels for 2014, remaining essentially unchanged. Slotted between the smaller Vantage on the lower end of the automaker's lineup and the 4-door Rapide S and high-performance Vanquish at the upper end, the 2-door DB9 sports GT (Grand Tourer) continues to catch the eye due to its long, low profile and rakish design, which makes it stand out on the road.

The DB9 sits close to the ground, with a high sideline and a low, swooping roofline, giving it an athletic appearance and making it one of the more distinctive sport coupes on the road today. Some complain of a similar design theme running through all of Aston Martin's cars, making it difficult to tell them apart. But if you have to have a common design, at least it's one that's impressively sleek and handsome with balanced proportions and beautiful paintwork. For at least some buyers, that exterior profile alone, along with the Aston Martin badging, makes the car worthy of its high sticker price.

Of course, with the DB9, you get a lot more than just pretty paintwork and a head-turning design. For starters, you'll get an aluminum VH body structure and chassis with increased stiffness and 70 percent new body panels, when compared to the 2012 version. Aston Martin claims the DB9 now weighs 33 pounds less than its predecessor, although it still tips the scales at a rather hefty 3,935 pounds. You'll also get an aluminum chassis with a 3-mode adaptive damping system and carbon ceramic brakes. Of course, you'll get a luxury-oriented cabin with full-grain leather upholstery, walnut trim and seating for 4. And you'll get a 6.0-liter V12, which pushes the DB9 from 0-60 in 4.6 seconds and to a top speed of 183 mph.

While those last numbers are certainly impressive, they don't match the best in the class. The DB9 excels as a grand tourer, but it's not quite a street racer like the Porsche 911 Turbo S, which makes the leap to 60 mph in an astonishing 2.9 seconds, or even the Mercedes-Benz SLS Class, which covers the same distance in 3.6 seconds. If you want a quicker Aston Martin, you can opt for the top-level Vanquish, which makes the run to 60 in 4.1 seconds. On the other hand, the DB9 isn't totally about speed and performance, but about enjoying the journey, whether you're accelerating off the mark or heading off on a long-distance road trip.

For the record, the DB9's V12 makes 510 hp and 457 lb-ft of torque at 5,500 rpm. That's an increase of 40 hp over the 2012 version. The front mid-mounted V12 sits behind the front axle and close to the engine bay's firewall, which helps ensure good overall balance, and drives the DB9 through the rear wheels. The engine mates to a rear mid-mounted ZF 6-speed Touchtronic 2 automatic transmission via a carbon-fiber driveshaft. With a V12, fuel economy numbers naturally suffer, checking in at 13 mpg city/19 highway.

The DB9 shares its VH rear-wheel-drive platform with the Rapide and the Vanquish. The platform features a 4-wheel independent suspension system with double wishbones in both the front and back, as well as anti-dive geometry and an anti-roll bar in the front, and anti-squat and anti-lift systems with an anti-roll bar in the back. A limited slip differential also comes standard, along with the adaptive damping system, which includes Normal, Sport and Track modes, giving drivers the opportunity to dial up the firmness of the ride and sharpness of the Servotronic speed-sensitive rack-and-pinion steering. The setup results in a stable, competent ride, though its lacks the quick agility of smaller cars like the 911. However, the adaptive damping system does a good job of absorbing rough road conditions. Carbon ceramic brakes, which come standard, dissipate heat while providing good stopping power with little brake fade.

Outside, the DB9 displays Aston Martin's signature smiling aluminum grille, while the sculpted hood, low roofline and high shoulders channel airflow around the vehicle, improving aerodynamics. A pronounced flip on the back end of the rear deck lid also helps direct airflow while adding visual appeal. HID headlights and LED taillights are among the standard exterior features, along with chrome side strakes, power folding heated side mirrors, dual chrome tailpipes and 20-inch cast alloy wheels. The DB9 Volante convertible features a power-folding soft top with a glass rear window.

Inside, the cabin provides plenty of room in the front, though the second-row seat remains tight for taller passengers. Owners can opt for a 2-passenger configuration with a rear cargo deck behind the front seats, available in the coupe only. Hand-stitched Bridge of Weir leather upholstery comes standard, along with heated front sport seats, a leather-wrapped sports steering wheel, power-adjustable seats and walnut trim with a graphite finish on the center console. Glass knobs and buttons provide an elegant feel, while white-on-black organic electroluminescent gauges are easy to read. Interestingly, the DB9 has no standard shift knob, but rather a series of switchgear glass buttons on the center stack, on either side of a larger push-to-start button.

Navigation comes standard, along with a 700-watt audio system with a 6-CD changer, satellite radio, a USB port and an auxiliary input jack. Automatic temperature control, Bluetooth, an auto-dimming rear-view mirror, aluminum pedals and front and rear parking sensors are among the other standard features. Interior and exterior options include a wide variety of interior wood trims and a 1,000-watt Bang & Olufsen BeoSound audio system, as well as upgraded leather upholstery, seats and wheels.

Safety equipment includes Dynamic Stability Control (DSC) with a Track mode, which allows drivers to loosen or disable the system for more aggressive driving maneuvers. Traction control and antilock brakes with electronic brakeforce distribution and brake assist also come standard, along with 4 airbags. The DB9 has not been safety-tested by the IIHS or the NHTSA.

222Morris Is this car available for sale

Have you driven a 2014 Aston Martin DB9?
Rank This Car