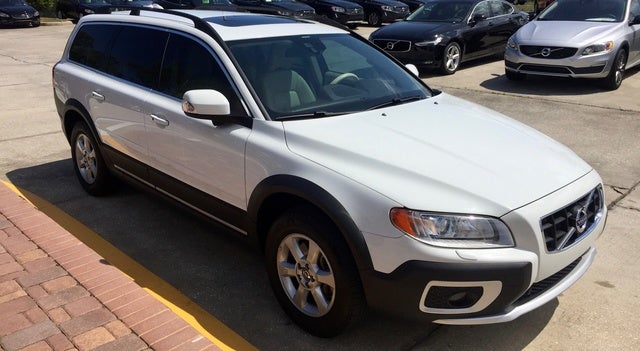 Fresh off yet another highly praised 2012 redesign, Volvo's rugged off-roading XC70 5-passenger wagon-like crossover gets headlight washers and rain-sensing windshield wipers standard for 2013. While fuel economy with the baseline 3.2-liter inline 6-cylinder and turbo 3-liter inline-6 tops out at 25 highway mpg, drivers who can appreciate this Volvo's versatility don't seem to care about the added expense, especially since it's guzzling only regular fuel, as opposed to the premium stuff most other luxury makers force on cars with worse economy. Of the few drivers who can stop driving their XC70 long enough to leave a review, none have a single complaint since the interior redesign for 2012.

That said, the T6 with its turbocharged 3-liter engine is definitely the favorite. The baseline 3.2 model doesn't seem to get the advertised 19 mpg city/25 highway economy, since the XC70's heft tends to weigh down performance of the 3.2 engine. Even though the 3.2 is estimated to boogie that body up to 60 mph in the segment-standard 8.4 seconds, drivers state they can hear the engine whining for a break when driven so hard. Picking all-wheel drive (AWD) over the default front-wheel configuration drops the 3.2's fuel economy to 18/24, which is quite comparable to the AWD-only T6's advertised 17/23—though drivers note they do often get better-than-advertised economy in the T6 and wonder why anyone would bother with the 3.2 when the T6 can get to 60 mph in just 6.1 seconds with the exact same 6-speed automatic and often better fuel economy.

As it happens, not everyone has a lead foot, and some drivers recognize the XC70 is not a sport wagon by any stretch, with a suspension built for off-road comfort over curve appeal. A max tow rating of 3,300 pounds no matter the engine should quiet most concerns, but it's still worth a test drive to make sure the performance matches your driving style. If you prefer front-wheel drive for its supposed cost savings, ask your dealer for information on Volvo's special alignment systems and whether this machine needs the same all-wheel treatment as has been historically true of other front-wheel Volvos. Very likely you will find the only cost savings is on the insurance, and since Volvo's AWD systems are notoriously reliable and long-lived, that leaves very little reason not to go for the bigger engine.

Thanks to Volvo's new simplified trim system, upgrading either the 3.2 or T6 to a higher tier is as easy as adding the Premier or Platinum option packages. The T6 differs from the 3.2 only by adding the turbo engine, standard AWD, 18-inch alloy wheels instead of the 16's, dual exhaust pipes and upgraded instrumentation—otherwise the 3.2 and T6 can be had with precisely the same equipment and options. With a ground clearance of over 8 inches and a max cargo capacity of 72 cubic feet, it's nice to find you have just as many limitations and frustrations in buying the XC70 as you do once you own it—which is to say, none.

Danielje anielje Volvo did a very nice job with this machine. I have the 3.0 T6 & the power matches my driving style & needs. I would characterize the performance as comfortable confidence as the throttle & braking responsiveness delivers when needed. The ride is comfortable & quiet and after a long drive I'm not worn out or tired. Its rode manners are very nice & the feeling being in a solid, heavy car adds to the confidence & feeling of safety that the XC provides. A double-plus-good Volvo. (I've owned 8.)

MarthaCollins2 asked a 2013 Volvo XC70 3.2 AWD General question about a year ago

My Car Sold. How Do I Remove It From The Listing?

My car sold. How do I delete the listing?

What Causes A Sudden Onset Of Black Sooty Exhaust And Rough, Wavering Idle....