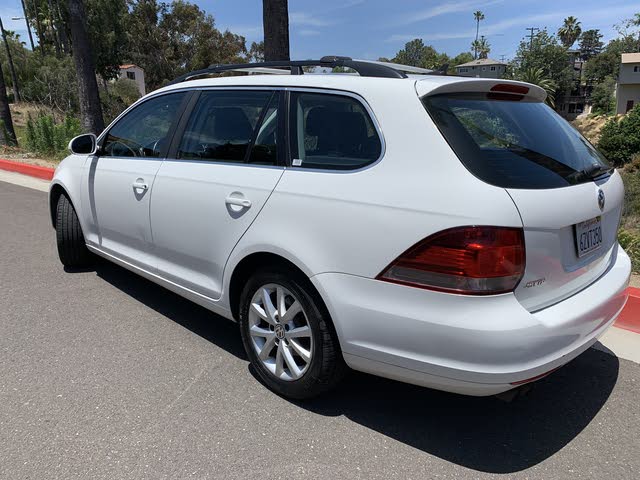 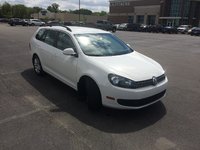 Average user score
4 ⁄ 5 stars
Based on 4 reviews
Excellent Family Car by sorinakis17 — We have this car for 2 yrs and we love it. They improve the heating so on cold days the car gets warmer fast. Cargo space is good. Gas consumption average 7.7 this last cold winter on mostly city dri... Read more

Due for a redesign any year now, the 2013 Jetta Sportwagen continues on the Jetta's previous platform for its second year beyond the Jetta's redesign, carrying over for 2013 with only one paint color difference. Not that drivers are complaining—the few complaints about the Sportwagen have to do with power in the TDI turbodiesel. Namely, this beastly engine tends to jerk people around when it's cold, and though that's not news to folks familiar with the V-dub's turbo, drivers just entering the Sportwagen and expecting the same Americanized ride as the latest Jetta tend to find that a bit of a nasty surprise.

Known overseas as the Golf Wagon, the Jetta Sportwagen is a front-wheel-drive midsize (but roomy) 5-passenger wagon that drives like a compact and packs like a minivan. Offering on-par zip-to-60 times around 9 seconds, highway mpg into the 40s and nearly 33 cubic feet for cargo before you fold down the back seats, those that need this level of utility are absolutely in love with this Volkswagen and see no equal on the market today. Indeed, no vehicle of its class offers 67 total cubic feet for cargo, and anything offering that much space doesn't drive with as much pep and agility.

The same S, SE and TDI trims carry into 2013 featuring comforts like full power accessories, roof rails, keyless entry, heated mirrors, heated windshield-washer nozzles, cruise control, heated front seats, tilt-and-telescoping steering wheel, Bluetooth connectivity and an 8-speaker sound system with CD player and auxiliary jack all standard at the baseline. The SE and TDI trade the 16-inch steels for alloys and cloth for leatherette vinyl upholstery, then add upgraded gauges, leather-wrapped shifter and steering wheel, and 2 more speakers for the sound system with a touchscreen interface, satellite and HD radio capabilities, 6-CD changer, iPod interface and steering-wheel-mounted controls. The SE can opt for 17-inch alloys and a panoramic sunroof, whereas the TDI's package adds a navigation system and keyless ignition on top of the new rims and roof.

The base engine is a 2.5-liter inline 5-cylinder good for 170 hp and 177 lb-ft of torque. The SE is powered by a 6-speed automatic that is also available to the S, but otherwise the S defaults to a 6-speed manual fetching the best economy of the non-diesel engines for 24 mpg city/33 highway. The automatic is good for 24/31 with this engine, which is still very respectable for its class. Springing the extra few grand for the TDI gets a 140-hp and 236-lb-ft of torque 2 liter inline 4-cylinder good for 30/42 with the manual transmission or 29/39 with the automated manual. The TDI is also the peppiest of the bunch, hitting 60 mph in just under 9 seconds.

The Jetta Sportwagen is definitely a car that is better in person than it is on paper. Don't be fooled by the "leatherette" or sub-200 figures for horsepower—give it a try. We're pretty sure the top-notch interior and refined performance will wow you, too, just don't expect a pedigreed sports car. It is, after all, a wagon.

What's your take on the 2013 Volkswagen Jetta SportWagen?

czkid I've driven VWs/Porsche/Audi products since 1955, and our current line up is a '98 New Beetle TDi, a '09 New Beetle Convertible, and our new 2013 Jetta Sportwagen TDi. It took me almost a year to find a JSW TDi with a manual transmission and no sunroof, but find it I did after driving many '09-'13 JSW TDi variants in search of "that car". The car is outstanding in all aspects except 2.... 1) I wish VW would install a decent sized set of exterior rear view mirrors, and 2) They need to revise the software controlling the shut down of the engine with mis-shifts (more on this later). The exterior rear view mirrors are tiny and although they are aesthetically appealing, they leave something to be desired functionally. Something about twice the size would be nice. I've driven manual transmission cars since 1955, and I've never had the engine shut down on me more that once or twice once I've driven the car. VW has two distinct problem areas with their manual transmission... first, the shift lever is spring loaded to the 3rd/4th position... so much so that unless you consciously think about it, you inevitably end up in 3rd rather than 1st gear. When in this position, and you begin to let out on the clutch the engine is "killed", my guess is by controlling software. As a matter of fact, whenever you have selected a gear that is not in the software's opinion the correct gear, the engine is "killed"... which results in you having to rotate the key to the off position, make sure the clutch is depressed, and then restart the engine... oft times in major traffic. Irritating to say the least, and never before encountered on any vehicle in my memory. Other than the above the vehicle is fantastic, handling, comfort, etc are exceptionally good. More than enough room for a family of 4 with all their bags etc, and yet a semi-sporty feel overall. Ralph

Have you driven a 2013 Volkswagen Jetta SportWagen?
Rank This Car

What does "CPO" mean on a listing?

I am considering purchasing a 2013 Jetta Sportswagon TDI with panoramic sunroof and have questions about using a roof rack to carry kayaks. With the rack and our two kayaks, we estimate the total wei...

Searching For A Fuse Plug

Would Driving The Jetta SportWagen For Principally Short Distances Have Any...

I live on a small island where the distances are just not that great. Upon going to the mainland the driving will be mostly on freeways.

TDI FWD with Sunroof and Navigation