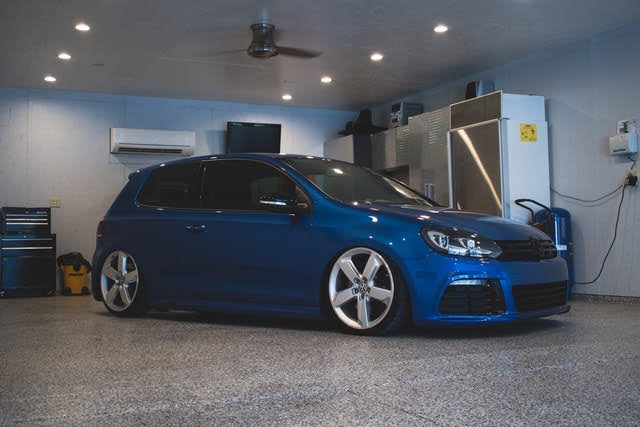 With the Polo having firmly taken up the mantle of the resident Volkswagen econobox in Europe, the Golf has found itself in an uncomfortably small space. The Passat looms just over the horizon, and with VW boss Winterkorn still aiming to make his company the world’s #1 car brand by 2018, something had to be done with the Golf.

When the R32 came out, people were confused by its intent and upset by its lack of a traditional manual. VW aimed to fix that error with the release of the R—a Golf for drivers. Here you wouldn’t even be offered the choice of a fancy dual-clutch transmission or a VR6 engine: The Golf is meant to be fitted with a 3-pedal manual and an inline 4-cylinder. It is a turbocharged inline-4, but we’ll forgive this minor transgression.

There are those who would argue any Golf should also be front-wheel drive, but who would turn down a Haldex all-wheel-drive (AWD) system? It’s even harder when that AWD system is capable of sending nearly all the torque to the rear wheels, where it’s supposed to go. Arguments could be made against the turbocharged inline-4, but again who has a bad word to throw at 256 hp and 243 lb-ft of torque? Even better, all that power comes thanks to a BorgWarner K04 turbocharger tossing 17.1 psi around. That’s a healthy advantage over the other special Golf out there, the GTI (56 hp and 36 lb-ft of torque, for those keeping score). The R also boasts a reinforced block and connecting rods, a stiffer suspension than the GTI and a quicker steering ratio as well. Brakes are even larger than on the GTI, a car that has never had trouble stopping, with 13.6-inch platters up front and 12.2s in the rear. Look through the unique 18-inch alloy wheels, and you’ll spot gloss-black calipers emblazoned with a large R for good measure.

So proving performance superiority over the venerable GTI seems an easy task, but you’re also paying a nearly 25% premium over that old plaid performer's price. Plus the R has 37 years’ worth of GTI history to overcome, so it had better be worth the extra bucks.

To that end, the R comes standard with features like a flat-bottom, leather-wrapped steering wheel, heated leather seats, keyless access and start, and dual-zone automatic climate controls. You get LED daytime running lights and adaptive bi-xenon headlights, too. In fact there are only three options you could further fit your R with: a power sunroof, Dynaudio stereo and navigation. But just in case you worry you’ll not be able to tell it’s an R and not just a dressed-up Golf, you’ll also get aluminium interior trim, as well as the R logo on the door sills, shift knob and seats. That’s ignoring the unique rear diffuser with center dual exhaust and more aggressive front fascia with larger air intakes.

Comparisons aside, lining the R up against the GTI simply isn’t fair. The Golf was originally designed as a compact economy car—FWD wasn’t chosen for performance reasons, after all. The GTI, great and fun as it has always been, is nothing more than an upgrade on what is a flawed formula for a performance car. The R is what you wanted but couldn’t afford—a hot hatch for a more refined driver.

What's your take on the 2013 Volkswagen Golf R?

Have you driven a 2013 Volkswagen Golf R?
Rank This Car

Hello, I have recently purchased a 2013 Volkswagen Golf R and I am hearing a noise when I start the car below 50 degrees. The noise comes from behind the radio so could be coming from drivetrain a...