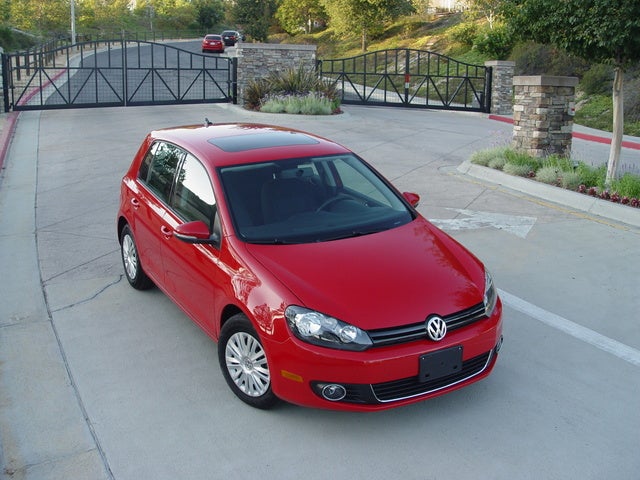 Hot off a possibly American manufacturing line, the next-generation Golf sets its sights on a landing strip in the 2013 model year. Volkswagen may decide to keep manufacturing of the all-new 2013 Golf in Germany for now, given all the issues with the American-built 2012 Passat, but if those issues can be cleared away soon enough, the new Tennessee plant could get production of more than the one mainstay built on Volkswagen's innovative new platform. Whether the same changes to the 2012 Passat carry over to the 2013 Golf depend largely on where it will be manufactured, since it would be silly to make so many changes for what is likely to be short-lived production in Germany, and Tennessee is already equipped to build the American custom model.

Where there's a will, there's a way, and V-dub is on a mission to get more 'Wagens in American hands than ever before by taking over the otherwise Honda- and Toyota-dominated markets. That means bringing down the cost to you by making certain models States-side with a few changes that may be hard to swallow—or very happy news, depending on your perspective. As for this reviewer, I would be very sad to see the front suspended on struts, depriving the Golf of all that refinement in its driving dynamics—but we Americans apparently like the ride cushy with a gradual steering response, so that's what we can look forward to at some point in the so-called Mark 7 Golf, even if not immediately for this 7th generation's debut. If the entry fee drops by a few grand, it's pretty much a sure sign the deed is done.

On the upside, wherever the Mark 7 Golf is built and however it is priced, it will be roomier, more upscale, greener and offered in more variety. Roomier because the new platform is more space-efficient than previous models, while also adding 2 inches to the wheelbase and width. Upscale because Volkswagen is including a dizzying list of premium-class features thanks to its new platform coming with a 20% cost cut. Greener because a plug-in electric is expected to join the lineup from its debut (though unlikely), while Volkswagen's innovative MQB platform also allows coupe and convertible body styles to join the lineup in addition to the traditional 2-door and 4-door hatch offering. These things you can rest assured are a "when" and very far from any doubt, but precisely when is still a bit up in the air.

Likely engines include the familiarly peppy pair, a 170-hp 2.5-liter 5-cylinder regular-grade gas burner and a 140-hp, 236 lb-ft of torque 2-liter 4-cylinder turbodiesel, dubbed the TDI. These will very likely be paired with the usual 6-speed manual or 6-speed automated-manual transmissions sending power to the front wheels, though reportedly the torque-converting tranny was ditched for better fuel economy, so even though this Golf is 250 pounds lighter, it may still be slower with the auto-manual than previous iterations.

The plug-in EV may not hit our streets until about 2015, which is also right about the time the soft-top and coupe are due, simply because there's no concept in testing yet. However, based on the Up minicar with the Blue-E Motion prototype, the Golf EV should do 115 hp for about 93 miles before needing a charge. It would be the slowest to reach 60 mph, at a paltry 11.8 seconds, but spending no money on gas just might make the EV sit right in that happy middle ground—versus 24 mpg city/31 highway at best with the 2.5 on a stick, or 30/42 at best with the expensive TDI and automated-manual instead.

What's your take on the 2013 Volkswagen Golf?

zipduffy I have 52,000 miles on my 2013 Golf, convenience / sunroof / 4 dr. I love this car. Of the 5 VW's I've owned, this is my favorite yet. I have the automatic and it's easy to get 32 mpg with regular driving. On long trips with cruise control it's 34 - 36. iPhone pairs seamlessly. The car is comfortable on long trips, 3 - 4 days of being sole driver. Braking is superb, short and straight. I've no complaints about this car. There's a 2013 Volvo XC70 in our household & unless there's a lot of snow I grab the keys to the VW every time.

Users ranked 2013 Volkswagen Golf against other cars which they drove/owned. Each ranking was based on 9 categories. Here is the summary of top rankings.

Have you driven a 2013 Volkswagen Golf?
Rank This Car

I am still shocked when a dealer does something like Ben Amin did with a car I had earmarked: VIN: WVWDM7AJ3DW136079 Vehicle: 2013 Volkswagen Golf TDI Stock Number: N/A Listed Price: $12,995 CarGurus...

Can I Tow With My Car Without Ruining It?

Will towing a trailer under 2000 pounds with my car over 500 miles ruin my transmission?

Are VW GTI And TDI Headlights The Same?

I’m looking for headlights for my VW Golf TDI, the whole headlight... we can’t seem to find any anywhere, are the VW golf GTI and TDI headlights the same?

62 views with 2 answers (last answer about a year ago)

I was in a car accident about 2 weeks ago, I was run off the road by a drunk driver and I ended up hitting the curb. My front right tire and right rear tire we hit and took it to the collision cente...

-My car's transmission feels like it stutters when shifting from 2nd-3rd -I can feel it downshift from 3-2 and from 2-1 (engine breaking) -gear is a bit stiff when putting car into D and R but not N ...

FWD with Conv and Sunroof

FWD with Conv and Sunroof 2dr

TDI with Sunroof and Nav 2dr