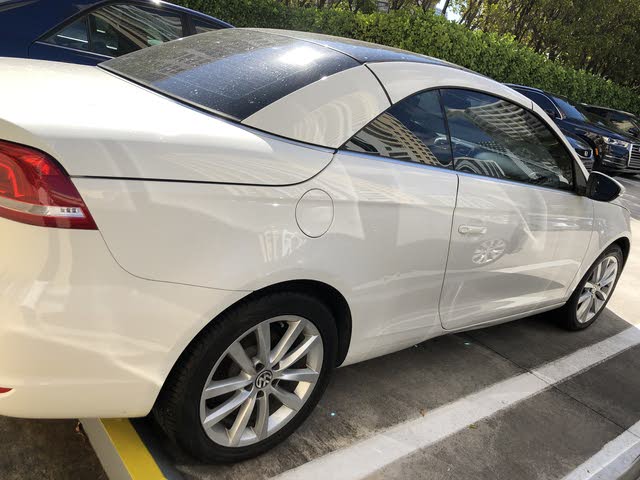 The polarizing cush-oriented hard-top convertible of Volkswagen's lineup just became an overlooked clover through the delicate operation of adding a Sport trim for 2013, and doing it well. The 2013 Volkswagen Eos Sport doesn't include an engine upgrade, but it transforms an otherwise, let's say, acquired taste of style into something considerably more palatable. Even appetizing. Especially if you find convertibles with power-retractable hard tops featuring an integrated sunroof particularly fascinating and don't mind having only 9.3 cubic feet for cargo in the trunk.

The Eos is no speed demon, that much is certain, as it offers a full 7.3 seconds to enjoy the view up to 60 mph, but don't let those rounded corners of questionable taste fool you into thinking any corners were cut on the manufacturing line. Case in point: The hard top requires 16 inches of rear clearance to operate, but it will beep at you if you need to make room. Sure, it's not quite as fancy as cars twice the price taking up 25 seconds to completely let in the sun, but you can also tilt or slide the sunroof section, which is still almost entirely unique to the Eos.

Volkswagen also proves two wrongs make a right with the rear spoiler on the 2013 Eos Sport. Sculpted and dainty, it doesn't allude to anything the Eos isn't, instead making it look like a completely designed car, if you ask me. Still there will be critics either way—it's a style you either love or hate. The Sport trim also adds 18-inch alloy wheels instead of the standard 17's, a lowered sport suspension, bi-xenon HID headlights with daytime running lights, black side mirrors and a black interior to complete the look and the entire list of Sport upgrades.

The 2013 Eos Sport uses the very same turbocharged 2-liter inline 4-cylinder powering the Komfort, Lux and Executive trims, and while it's not built for speed, this 200-hp and 207-lb-ft-torque four-banger is definitely ample. Some drivers new to Volkswagen's turbo note there's a bit of a learning curve needed to prevent throwing yourself and everything else into the back when starting off the line, and return drivers favorably compare this generation to the last, calling it smoother, quieter, quicker and more comfortable. The 6-speed automated manual handles shifting imperceptibly while pushing power through the front wheels for a token fee of 22 mpg city/30 highway.

Standard features include fog lights, heated mirrors and windshield-washer nozzles, wind deflector, keyless entry, cruise control, heated 8-way power seats with adjustable lumbar support, leatherette premium upholstery, leather-wrapped steering wheel and shifter, Bluetooth connectivity and an 8-speaker stereo system with an iPod interface, HD radio, satellite radio, an auxiliary input and a CD player, all with a touchscreen interface. Some drivers note all the buttons can be a bit intimidating, but at least their dealership was happy to hold their hand through it until they were comfortable.

Upgrading to the Lux adds different 17-inch wheels, parking sensors, power-folding mirrors, keyless ignition, automatic wipers, leather upholstery, an auto-dimming rear-view mirror and a navigation system instead of HD radio capabilities. For those who don't like the new Sport's styling, the Executive antes up with a sport-tuned suspension, 18-inch wheels and a 10-speaker Dynaudio system adding HD radio back into the mix without the spoiler and black accents of the Sport. Adding the Tech package to either the Lux or Executive affords a few more of the Sport's features, including bi-xenon headlights, LED running lights, headlight washers and a color trip computer display.

What's your take on the 2013 Volkswagen Eos?

Have you driven a 2013 Volkswagen Eos?
Rank This Car

I would like to sell/trade my vehicle on CarGurus

What Is The Dif. Between EOS LUX SULEV And EOS LUX?

I am in the market for a car and i'm leaning to the VW eos Lux but I have no idea what the word (if in fact it is a word) SULEV is or it's meaning.

Have There Been Any Problems With The Roof Leaking Or The Roof Mechanics Ma...