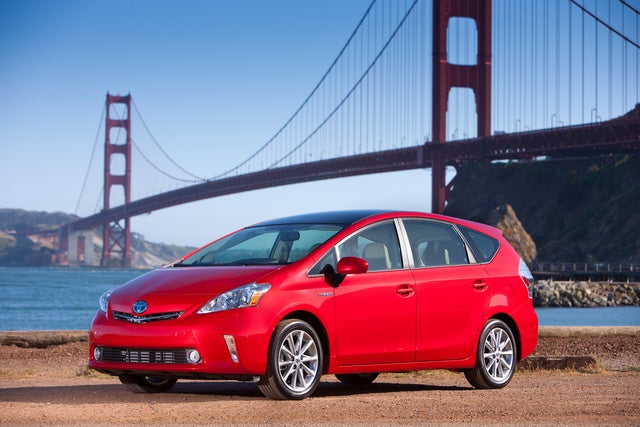 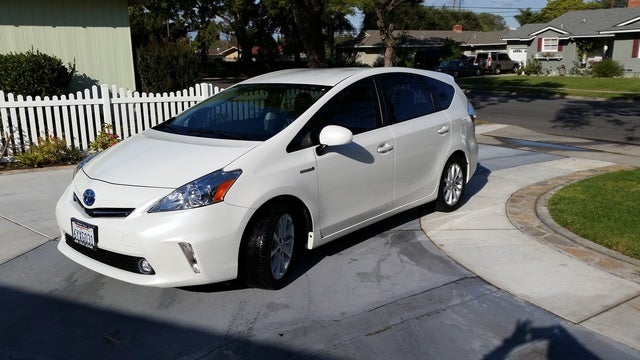 Similar to its Toyota siblings the Prius C and Prius Plug-In Hybrid, the 5-passenger 2013 Prius V is in its second year of production and, also like the others, has had no significant changes from last year’s models, with the exception of a simulated-leather-trimmed steering wheel.

The 2013 Toyota Prius V is available in three front-wheel-drive trims: Two, Three and Five. All hybrid gasoline-electric Prius V trims roll off the assembly line equipped with 1.8-liter 2ZE-FXE inline 4-cylinder dual VVT-I engine that achieves 98 hp and 105 lb-ft of torque. Along with its 60-kilowatt traction motor, the Prius V makes 134 hp and 153 lb-ft of torque. The Prius V's engine is mated to an electronically controlled continuously variable transmission and a 201-volt nickel-metal hybrid battery pack and is estimated to get 40 mpg city/42 highway.

All 2013 Toyota Prius V trims are configured with numerous safety features and have been rated a Top Safety Pick by the Insurance Institute for Highway Safety. They include Toyota’s Star Safety System: enhanced vehicle stability control, traction control, antilock brakes, electronic brakeforce distribution, brake assist, hill-start assist and smart-stop technology. There are 7 airbags in the Prius V: driver's and front passenger airbags, driver’s knee airbag, and front and rear side-curtain airbags. The steering column is energy absorbing and collapsible, and the driver's and front passenger seats are designed to be whiplash lessening. An engine immobilizer and vehicle proximity warning system are standard security features, while Safety Connect, which features emergency assistance, a stolen vehicle locator, roadside assistance and automatic collision notification, is an upgrade available for the Prius V Five only.

Many buyers of the 2013 Toyota Prius V chose it over the regular Prius for its larger size, exceptional fuel economy and spacious cargo area (67.3 cubic feet!). Prius V trims are not known for their handling, and that’s not why you'd buy one. However, some current owners do note that the Prius V offers a quiet and smooth, if not particularly powerful, ride. The Prius V is a little heavier than its counterparts, so it feels relatively stable on curvy roads.

For those looking for a wagon-style hybrid, the 2013 Toyota Prius V is your likely choice. Designed for families on the go who are both fuel conscious and looking for extra space, the Prius V generally outshines the Ford C-Max Hybrid, which is its closest competition. Pricey like most hybrids are, the potential savings the Prius V offers clearly outweigh its upfront costs.

Abby1k The monitor for the radio/phone/backup camera turned from having a black background to white then to unable to see it at all. Has anyone else had this problem? It cost over $1,500 to replace the whole thing. I think it’s a defect.

Users ranked 2013 Toyota Prius v against other cars which they drove/owned. Each ranking was based on 9 categories. Here is the summary of top rankings.

Have you driven a 2013 Toyota Prius v?
Rank This Car

How To Edit Price In My Ad?

edit price in my ad

Is This Dealer Trying To Have Me Buy Extra Unneeded Service.

Does Power Seats Come Standard With The Prius V 5?

We Have Three Company Cars That Were Turned In And Want To Sell. Do Have A ...

We have three company cars that were turned in and want to sell. Do have a rep that can come out and give us an estimate?