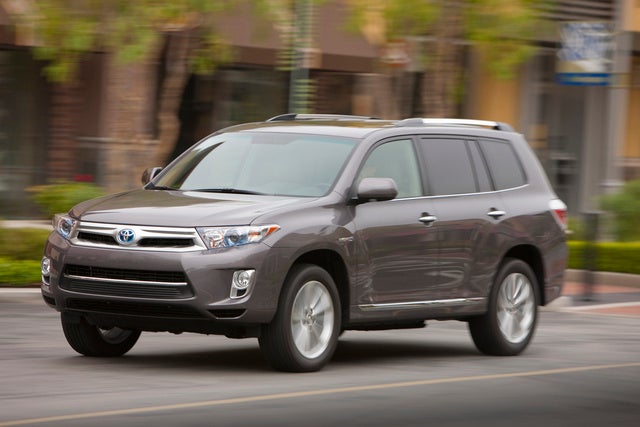 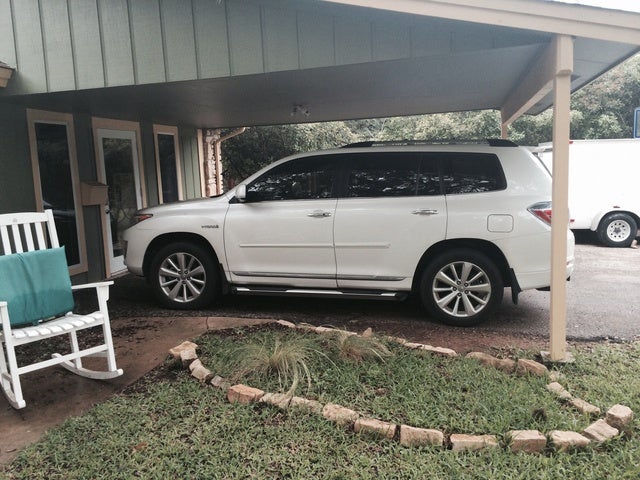 Toyota's Highlander Hybrid gets lots of attention for 2013, carrying over essentially unchanged in terms of looks and power, but definitely sweeter for a bunch of newly standard and optional features. This on- and off-road savvy 7-person hauler is apparently due for a redesign in 2014, but most makers are known to hold their hybrids back a year before letting them graduate into the new generation. All of these new features would say otherwise, though—makers also tend to go for one last big hurrah before the change to spur sales. Since the 2014 is more likely just visually different than anything else, it's probably prudent to jump on these 2013 loaded editions if everything else is right, since Toyota especially is known to cut costs (read: features) in first-generation vehicles.

Every 2013 Highlander Hybrid gains the same 3.5-inch display with USB and Bluetooth connectivity as the pure-gas 2013 Highlanders, but also adds navigation and Entune exclusively for Hybrid models and the top-shelf non-hybrid trims. The 2012 Leather package is swapped out in 2013 for the Leather Premium package, including a power tilt-and-slide moonroof, leather-trimmed heated seats, auto-dimming rear-view mirror, leather-trimmed steering wheel and HomeLink. The top-shelf Hybrid Limited gets a JBL Premium Audio system, rear automatic climate control and perforated leather seat tops all standard for 2013.

Those changes to the seats could be a result of driver complaints about the seats being too hard, but otherwise not a single change directly addresses issues brought up by 2012 drivers. Certain interior colors tend to reflect more light than others off the Highlander's hard, plastic dash, for example. Beware if your tested Highlander rattles, as this is a sure sign of sloppy manufacturing, which will plague your Highlander Hybrid's fuel economy and otherwise highly responsive handling.

Some issues are just more annoying than anything else. Drivers say a rain guard would be nice to prevent weather from settling on the seats, driver-accessible storage could be more ample, the GPS should allow programming while in motion, since you're probably going to have passengers in a people-hauler, and "rear climate controls" means just that—other than on or off, second-row passengers are the only ones who can change a climate setting. Otherwise drivers have plenty of reasons to be exceptionally happy about their Hybrid, and aside from the occasional lemon, none of these reasons are enough to degrade the vast majority of driver reviews more than 1 star beneath the highest possible rating.

Fetching an estimated 28 mpg both city and highway, the Highlander Hybrid is an efficient rendition of the 3.5-liter V6 offered in the pure-gas Highlander, ponying up 280 hp and 264 lb-ft of torque in this application for zip-to-60 in just 7.4 seconds. It hauls up to only 3,500 pounds when properly equipped, as compared to the 5,000 pounds this V6 is otherwise rated to tow, and while cargo capacity and overall elbow room were not the Highlander's strong points to begin with, the Hybrid components don't take up much room, leaving a full 94 cubes of maximum cargo with both passenger rows folded flat.

Aside from the engine, obligatory CVT, obligatory part-time all-wheel drive and the expected differential in ratings because of those factors, the Highlander Hybrid mirrors its pure-gas brother in every way. In other words, aside from being quicker, more fuel efficient and towing less, you can expect the same as any other Highlander—cramped third row and high-technology alike—for an exceptionally reasonable price.

What's your take on the 2013 Toyota Highlander Hybrid?

Have you driven a 2013 Toyota Highlander Hybrid?
Rank This Car

the battery is not uder the hood

How To Reset TPMS On 2013 Toyota Highlander Hybrid?

How to reset the TPMS on 2013 Toyota Highlander Hybrid? There does not seem to be a button anywhere. Have they engineered this so I MUST travel to Dealer and pay to reset system after installing m...

122 views with 1 answer (last answer about a year ago)

I Plan To Bring My 2013 Highlander Hybrid To Florida Where We Spend The Win...