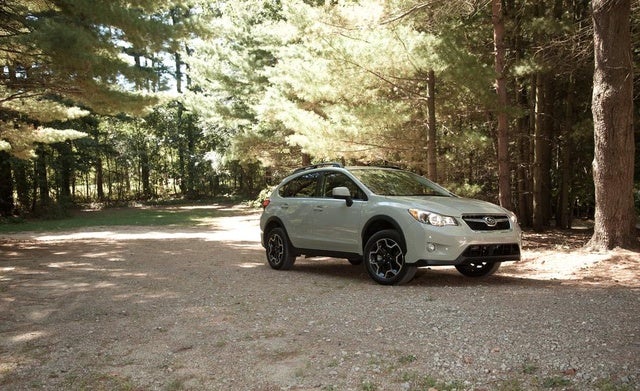 Average user score
4.5 ⁄ 5 stars
Based on 12 reviews
Amazing Car To Drive! by jlv2012 — This is an amazing vehicle! I have owned this for about 6 months now and I am very pleased with it. Ride and Comfort were big on my list, and it has exceeded my expectations! And I can not complain ab... Read more
Love The Subaru Crosstrek by theyellowroseoftexas — Want a great little AWD that gets good gas milage and is known to be dependable, buy a XV - awesome little car! Radio is the one thing you might want to upgrade in the Premium model. Other than that w... Read more
Review by Scotty — The Crosstrek seems like a great little car with a reasonable price. Read more

Increasingly these days, SUVs and crossover vehicles equipped with all-wheel drive (AWD) are designed primarily for use on pavement, rather than for serious off-roading. It makes sense, then, that Subaru would step in to fill the void with the new XV Crosstrek, a compact crossover vehicle that's actually designed to go off-road.

Based on the fourth-generation Subaru Impreza, which made its debut for the 2012 model year, the 2013 Subaru XV Crosstrek features AWD, a raised ride height, expansive cargo space and a rugged exterior design that makes it the ideal vehicle for venturing onto narrow dirt roads, mountainous trails or snow-covered lanes, as well as interstate highways. As a bonus, it's also the most fuel-efficient AWD vehicle currently available in the U.S., traveling up to 33 miles on a gallon of gas.

The XV Crosstrek sits 8.7 inches off the ground, or about 4 inches higher than the standard Impreza. That's also higher than most crossover vehicles and some SUVs, including the Ford Escape and the Jeep Compass, the automaker notes. Subaru beefed up the Impreza's standard 4-wheel independent suspension with high-strength and unique components, including upgraded engine mounts (when equipped with the CVT transmission) and rear ball bushings, to enhance stability and agility while damping down vibration.

Reviewers who have put the XV Crosstrek through its paces over all types of off-road terrain report that it capably handles all conditions. The 4-wheel disc brake system with large rotors in the front provides solid braking even on extended descents, and the all-wheel, all-speed traction control system, which works with the Symmetrical AWD system, helps ensure minimal loss of traction even in the slipperiest and wettest conditions.

Power for the XV Crosstrek comes from the same 2.0-liter, 4-cylinder Boxer-style engine that drives the Impreza. The horizontally configured engine, in which the pistons move side-to-side rather than vertically or in upright V-shaped angles, provides better balance and less vibration, according to the automaker. The engine produces 148 hp and 145 lb-ft of torque.

Subaru offers the XV Crosstrek in two trims for its debut year. In the base Premium trim, the 2.0-liter engine links to a 5-speed manual transmission. In the top-level Limited trim, the transmission upgrades to a Lineartronic CVT (continuously variable transmission) with an Incline Start Assist feature, which prevents the vehicle from slipping backwards while the driver's foot moves from the brake to the accelerator pedal. Borrowed from the Legacy and Outback as well as the Impreza, the CVT continuously adapts to performance needs with no noticeable shifts or steps, which helps improve overall efficiency.

While the XV Crosstrek's suspension does a good job of handling all types of terrain, the 4-cylinder powerplant lacks punch, according to a number of reviewers. Most agree that the highly capable XV Crosstrek needs a bit more power and low-end torque, especially for sporty or athletic off-road maneuvers. On the positive side, the engine posts good fuel economy numbers of 23/30 mpg with the manual shifter and 25/33 with the CVT. An ECO gauge, which comes standard with both transmissions, assists drivers in operating the vehicle more efficiently.

Outside, the XV Crosstrek displays a unique front grille and front and rear bumpers, as well as black side and wheel-arch cladding, which give the crossover vehicle a distinctive appearance. Dark-tint privacy glass also comes standard, along with foglights, roof rails and a body-color rear spoiler. But the exterior feature that stands out the most are surely the 17-inch, geometric-patterned aluminum-alloy wheels with a dark gray machined finish, standard on both trims.

Both XV Crosstrek trims come equipped with an All-Weather Package, which includes heated front seats as well as heated side mirrors and a windshield wiper de-icer. Standard interior features for the Premium trim also include a 6-way manually adjustable driver's seat, a 4-way manually adjustable passenger seat, cloth upholstery and a 60/40-split flat-folding rear seat. The 3-spoke tilt/telescopic steering wheel includes audio, cruise and Bluetooth controls, while the 6-speaker AM/FM audio system comes with a CD player, USB port and auxiliary input jack. A multi-function display, keyless entry and power windows and door locks are among the other standard features.

The Limited trim adds leather upholstery, a leather-wrapped steering wheel and shift handle, automatic climate control and a rear-seat armrest with 2 cupholders. In addition, the Limited's audio system adds a 4.3-inch LCD display and HD radio with iTunes tagging. A rear-view camera also comes standard on the Limited. Options for both trims include a power tilt/slide glass moonroof and a navigation system with a 6.1-inch touchscreen, NavTraffic and SiriusXM satellite radio.

The XV Crosstrek comes equipped with 7 airbags, including front, side-curtain and a driver's knee airbag. Other standard safety features include Subaru's Vehicle Dynamics Control (VDC) system, which combines electronic stability and traction control, as well as antilock brakes with electronic brakeforce distribution and brake assist, daytime running lights and a tire pressure monitoring system. In addition, the automaker notes that the 2012 Impreza achieved top safety ratings and was named a Top Safety Pick by the IIHS, and it expects the same for the XV Crosstrek.

Early owners are generally positive about the XV Crosstrek, giving it good marks for its exterior design, functionality, interior room, ground clearance and standard AWD system. In addition, owners find a good balance between performance and fuel economy. Unlike some reviewers, many owners do not feel their vehicles are underpowered and equate the XV Crosstrek's performance to similar vehicles from Honda, Toyota and Nissan. Some owners find the XV Crosstrek a little noisy at times, and others would like to see a little bit better fuel economy, but overall owners are very happy with their purchases.

What's your take on the 2013 Subaru XV Crosstrek?

Users ranked 2013 Subaru XV Crosstrek against other cars which they drove/owned. Each ranking was based on 9 categories. Here is the summary of top rankings.

Have you driven a 2013 Subaru XV Crosstrek?
Rank This Car

Key Wont Turn Off And Release

When i go to park and turn off the key it locks half way and won't come out. Have to reverse and pull forward sometimes several times before it will turn completely off. Anyone else have these iss...

Over a week ago, while driving my Crosstrek across country from Colorado to Florida, my At Oil Temp light started flashing (along with AWD, traction control, and hill assist, I believe- but those we...

My Back Door Do Not Open From Inside

, it's all two Door from backside do not open from inside but it can open from outside

125,000 miles. Had the oil changed and tire rotation on Saturday at the dealership. Sunday, I changed the drivers side fog lamp - I jacked the car up from the driver side, high enough for me to get ...

Does The Backup Camera In A 2013 Subaru Crosstrek Give Off Any Feedback, Wh...

Does the backup camera in a 2013 subaru crosstrek give off any feedback, when someone walks by or if you come close to a another car?