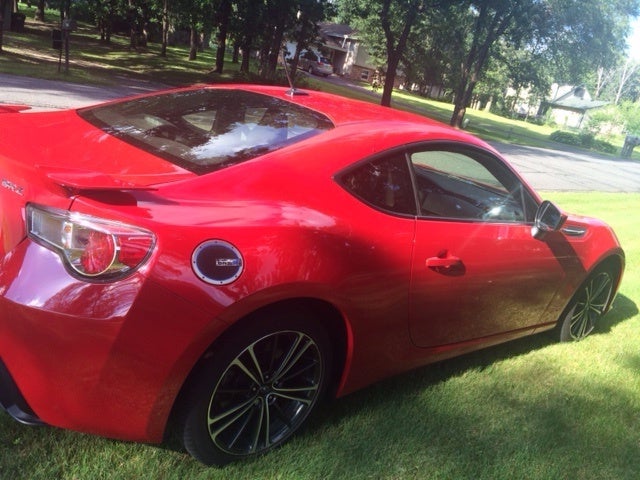 People will have a hard time accepting the Subaru BRZ. It’s not AWD, it’s not turbocharged, and it was built partially by Toyota. Let them lag. Anyone who sits behind the wheel of the BRZ isn’t going to be thinking about forced induction or symmetrical anything. Instead, they’ll be wondering why Subaru’s been messing with sedans and station wagons all these years.

Looking at the numbers, you’ll find more reasons to balk. 200 hp and 150 lb-ft of torque don’t impress anymore, but considered in context, there’s a lot to cheer about. First, at 2,689 pounds, the BRZ weighs 600 pounds less than the Hyundai Genesis Coupe and 100 less than the Honda Civic Si. Second, its handling simply can’t be ignored. Subaru made sure the center of gravity stayed low, and at 18.1 inches, the BRZ will best the Porsche Cayman, the Ferrari 458 Italia and the BMW M3.

Well, well, well…mention some Euro-trash, and suddenly ears start to perk and those power figures seem a little more appealing. While Subaru’s all-new 2.0-liter FA boxer engine won’t be getting the benefits of turbocharging – just yet – it has plenty of techno-goodness to tide it over, and Subaru even admits its intention of using it as the base of its next turbo engine. They’ve even spoken of a power bump at the mid-cycle refresh, but let’s concentrate on the engine we’ve got today.

As compared to the FB engine in the current Impreza, the FA sits a full 4.8 inches lower and over 8 inches further back in the chassis under an aluminum hood – all major factors in the legendary CoG rating. How Subaru managed it is due to a shorter and lower intake manifold, shallow-bottom tranny and a revised and more compact lubrication system. The radiator was even tilted to further push weight back, and Toyota provided a direct-injection system for the engine that allowed a sky-high compression ratio of 12.5:1. This means power delivery begins with its 150 lb-ft of torque arriving at 2,800 rpm and staying nearly flat up to 7,000 – right where hp peaks as well. You’ll get only 400-rpm worth of max hp though, so keep those revs high.

You’ll have the choice of two 6-speed Aisin transmissions – a 3-pedal manual and a paddle-shifting automatic. Thankfully, either are big improvements over the usual cog-swappers offered by Subaru, with the manual deserving special praise for its light pedal and assertive shift character. 80 percent of its architecture was changed for the purpose of improving feel and speeding gear selection, resulting in shorter pacing and quicker throws. Some testers have claimed the pedal is too light, but we’ll wait until some traffic time is logged before those comments are taken into consideration, especially since the throw was shortened and the rake optimized for heel-toe work. With the manual, expect to hit 60 in just 6 seconds – a tenth or two slower with the automatic – and while the BRZ requires premium fuel, Subaru is estimating fuel economy around 30 mpg on the highway.

For now, the BRZ is working with electric steering with a 13:1 ratio and a tiny 14.4-inch wheel – nearly an inch smaller than the next smallest Subaru offers. The setup tends toward understeer at the limit, but this can be rectified simply by precise application of power to the rear wheels. Always a good time, especially with the skinny 17-inch tires the BRZ is currently shod with. Expect those to grow in width and diameter in the near future though, both in the aftermarket and through the dealer. Dual-piston calipers up front grab an 11.7-inch vented steel disc, while the 11.4-inch disc out back is squeezed by a single piston.

Subaru brags that the BRZ is the world’s smallest 4-seat RWD coupe. As such, it should be no surprise the trunk is just a hair shy of 7 cubic feet, although with a wheelbase of just 101 inches, that’s mildly impressive. And while competitors like the Genesis Coupe aim to be a stripped-down racer, the BRZ comes standard with a navigation system, Bluetooth, HID headlights and a limited-slip differential. The Limited trim further adds heated leather seats with alcantara, pushbutton start and automatic climate controls. These are things that make a car livable as well as fun to drive, and that’s been a rare combination of late.

Subaru seems to remember some of us actually like to drive, but that doesn’t mean we want to drive a track car every day. With a traditional 3-pedal manual, RWD configuration and a center of gravity that would make even Porsche jealous, the BRZ is the type of car a lot of us have been waiting for. Soon, no one will question the lack of a turbo or the lack of AWD. Rather, they’ll question why other Subarus don’t feel like the BRZ. And besides, there will be a turbo in the BRZ’s future, STI or not. Feel free to wait for the rest of the world to catch up. From here, it looks like a great time for early adoption.

Matthew The BRZ pedals are too light and despite loving my car, I now have Repetitive Strain Injury in the right calf muscle because without adequate resistance, you have to hover your foot over the pedal. Im thinking Ill have to change cars if it can't be changed.

Users ranked 2013 Subaru BRZ against other cars which they drove/owned. Each ranking was based on 9 categories. Here is the summary of top rankings.

Have you driven a 2013 Subaru BRZ?
Rank This Car

Where Can I Get Bill Of Sale And Warrantee Paperwork?

I listed my car and searched my vin with carfax and no accidents were reported but on this website it shows there being 1 accident and I don’t know what it is.

I Want To Start Customizing My Car Where Should I Start? What Else Is A Goo...

I'm considering getting a used car with good gas mileage. My husband wants me to get a Subaru but I'd like a convertible. Is there any Subaru made that might satisfy both of us?

I hear a noise from underneath my car when I installed my headers and overpipe, I am wondering what it is?