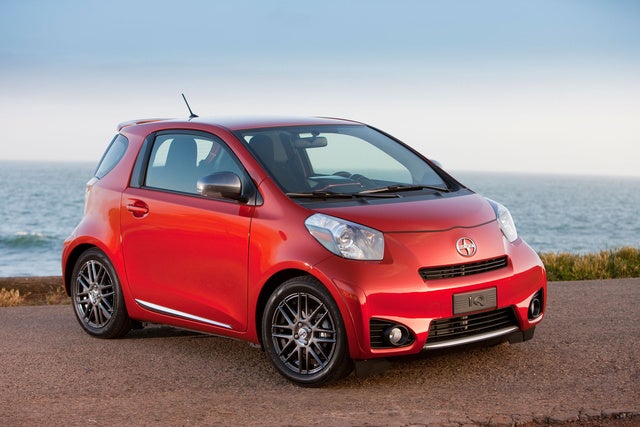 Toddling into its second year, the Scion iQ gets an optional premium stereo and some markets will get an all-new limited Supercharger edition. Whether U.S. markets will ever get ahold of that wide-mouthed crybaby is not known, but it could be a sign of things to come—especially if Aston Martin's spinoff of this cute city baby, reserved only for previous buyers, keeps its unprecedented demand.

The distinctly Japanese city-going iQ debuted for 2012 with much fanfare and only a few disappointed drivers. Touted as a 3.5-seater by parent company Toyota for its severely limited rear legroom, the iQ straddles the subcompact and go-kart classes with a turning radius that threatens to turn unicyclists green with envy. However, small and light as it is, "peppy" is not a word seen in reviews, and its estimated fuel economy raises at least this reviewer's eyebrow.

It's efficient, but for what it is, the iQ should do better than 36 mpg city/37 highway. The likely culprit is its 1.3-liter inline 4-cylinder that needs 6,000 rpm to get all 94 hp and 4,400 rpm for its 89 lb-ft of torque. The laggard acceleration due to such an underpowered engine is quite evident in its zip-to-60 estimate of 11.8 seconds. So if you prefer getting from A to B efficiently in terms of fuel, the iQ is great, unless you also like to get from A to B efficiently in terms of time.

There's certainly something to be said for being able to pass someone given a small window of opportunity, and Aston Martin's Cygnet sings to that tune. Scion is apparently testing a Supercharger edition of the iQ for a limited release to catch some of the fanfare for AM's able rendition of the Scion's iQ chassis, but early reports indicate very little improvement in power.

However, if your city's streets are more like parking lots than byways, the Scion iQ offers entertainment, upscale comfort and plenty of opportunities to enjoy its stylistic quirks (7 configurable interior lighting schemes, anyone?) while you wait for the commuting herd to move. Scion offered a free Playstation Vita for 2012 iQ early birds that could be a great defense against backseat drivers, since you could drive an iQ in the MotorStorm RC game. Even in 2012 you could connect just about any gadget to the iQ's touchscreen interface for a driver-friendly way to handle functions on small screens while letting every passenger in on the fun.

For 2013 the options expand to include a new BeSpoke Premium stereo system with HD Radio, Bluetooth connectivity (instead of the tethered 2012 approach), iTunes tagging and Pandora through a connected iPhone. If you're trendy enough to also have the BeSpoke app, services like Facebook, Twitter and Yelp can also be funneled through the iQ's infotainment systems for a complete home geek base away from home.

So as not to spoil the surprise, the iQ doesn't drive like any other car. Yes, its continuously variable automatic transmission spouts power to the front wheels, but that's not what I mean. You'll just have to test one, since it's really an experience that should be on everyone's bucket list. Peppy it may not be, but the iQ has its own definition of fun that the right driver just can't help but love.

dwight I enjoyed my iq , thought the acceleration was more than fair ,no problem cruising at 75 on highway , fits everywhere ,handled quite well . the negatives ,noisey cabin cheesy radio awful design on interior seats

Hi, the Scion iQ looks small and I like that about it. However the only thing I would be concerned about is whether a bike could fit in there. Currently I have a Ford Focus 2-door hatchback and I pop ...