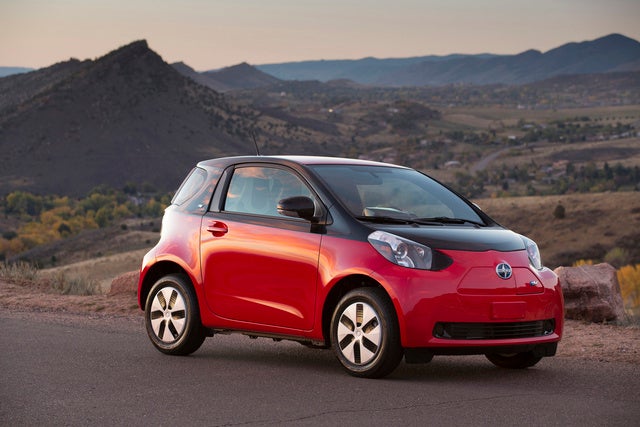 Looking for a Used iQ EV in your area?

So you want an electric vehicle that can claim the world’s lowest power consumption rate as well as the lowest 5-year cost to own? Well, there’s good news and bad. The good news is, such a vehicle exists. The bad news is, you’ll probably never even see one.

That’s because Toyota—which produces Scion cars—has decided the iQ EV isn’t palatable to a large enough swath of the public. Because of reasoning like that, only 100 iQ EVs will be produced, with only 90 of those coming to the U.S., direct to fleet and car-sharing programs around the country.

If you happen to find yourself with the rare opportunity to drive one, you won’t be disappointed, and that has nothing to do with the ownership perks listed above. No, the iQ EV is a capable little subcompact from a purely practical standpoint, despite what the numbers might lead you to believe.

After all, 63 hp hasn’t impressed anybody in a half-century, even when backed up by 120 lb-ft of torque. Same for a 78-mph top speed and a 50-mile range (admittedly in ideal conditions). Numbers like that seem like we’re going backward. But this is a new world, and a new measuring stick is being employed.

Perhaps Toyota should’ve looked at it, though. Yes, the general impression is that an EV with a 50-mile range couldn’t possibly serve the needs of your average commuter, but the facts spell a different story. A DOT survey from 2009 found that 98 percent of all single-trip journeys by car were under 50 miles—95 percent under 30. You might think that’s cutting it close, but the average trip was just 5.95 miles. Even for rural respondents, 95 percent of trips fell under 50 miles.

Of course, the iQ EV will never have to prove itself on rural roads, relegated to the world of college campuses and city fleets. It’s there that its 12kWh lithium-ion battery will provide the world-class power consumption rate of 104 Wh/km or 121 MPGe—figures you should probably start digesting for the future. And when it comes time to refuel… eh… recharge… the iQ EV does it in just 3 hours at a dedicated 240-volt outlet, something the fleet centers and recharge stations in major cities provide. At a regular 110-volt wall outlet, plan 10 hours for a full recharge.

How much you’ll need to recharge depends on how you drive. The iQ EV has three modes—B, S & D—intended to emphasize braking regeneration, acceleration and energy consumption, respectively. These systems have all been harvested from knowledge and parts gained during Toyota’s previous decade producing the Scion, so no concerns there, and additional energy-saving measures were taken to supplement, like heat-pump air and LED lights. Of course, you also get a 7-inch display, HDD navigation and heated front seats, so we’ll see how the trade-off works.

Despite the likelihood that most of us will never see one, the iQ EV represents another obstacle climbed on the alternative-fuel mountain. With only 100 on the road, it’s still another step toward electric acceptability in the states. Just wait until you see the next generation of EVs. If you manage to decipher those numbers, they just might impress.

Looking for a Used iQ EV in your area?