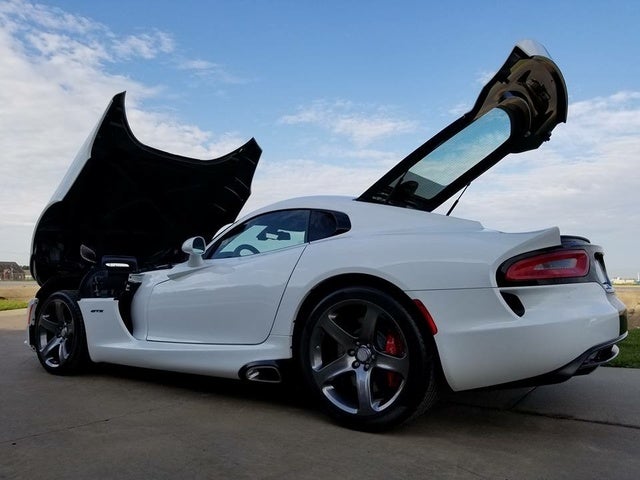 What are you to do when the old’s the same as the new? Dodge has been trying hard to convince us we’ve got a whole new snake on our hands after taking a year off from production, even going so far as swapping the Dodge plate for new SRTs. But don’t be fooled, the new Viper isn’t new. More like nearly new. That’s better than gently used or previously enjoyed at least, but the 2013 SRT Viper rides on the same chassis as the Dodge Viper and is powered by the same engine/tranny combo—heck, even the sheet metal looks like the old.

There are modifications, to be sure. Front track is stretched and the rear suspension tweaked to move the toe link forward of the axle. Aluminum suspenders are added back there, too. You’ll find a new X-brace under that big hood that accounts for a 50% increase in torsional rigidity, but scratch just slightly deeper and you’ll get to the real changes.

The new Viper's engine may be the same 8.4-liter V10 block as before, but you’ll have a hard time remembering that with all the changes introduced. My favorite is the offset mounting, designed for better weight distribution side-to-side, as the engine is pitched toward the passenger side for better balance against the driver’s weight when piloting solo. That’s not to ignore the deep-tissue massage the engine got as well—40 extra horsepower and 40 extra lb-ft of torque are hard to dismiss. Intake cam lobe profiles were reshaped, and sodium-filled exhaust valves now let out the hot gases. A composite intake and aluminum flywheel shed some more pounds, and forged aluminum Mahle pistons will be pumping away inside.

Cooling has been addressed as well, both for the rear pistons that were known to run hot in the old Viper, as well as in the cabin, which used to heat up thanks to the old exhaust design running a cross-pipe under the seats. In total, the 2013 engine is 25 pounds lighter than in 2011, and each one will be hand-assembled and dyno-tested to make sure it measures up to all of Dodge/SRT’s boasting. The 6-speed Tremec manual transmission gets the same treatment with a shorter final drive of 3.55:1, shorter shift throws and a gearset with an overall closer ratio than before.

The sheetmetal is a pleasant blend of 4th- and 2nd-generation designs, but here the hood, roof and rear hatch are all carbon fiber, and the doors and sills are aluminum. The firewall may be the most impressive: an expanse of cast magnesium rumored to be the largest automotive application of the material in history.

But the big news for Viper purists is the addition of such sacrilege as stability, traction and cruise control. In a Viper? Yes, in a Viper. Of course, you can deactivate the first two and just not engage the latter, but Federal mandates must be followed. If you do decide to shut off the nanny assists, you’ll rely on Pirelli P Zero Z-rated tires designed specially for this application, in 355 back and 295 front sizes to keep your feet planted.

This Viper comes in two flavors, Viper and Viper GTS, the latter offering some extra tech and comforts for those who have intentions beyond just being fast and loud. Either one boasts an improved interior, confronting one of the major complaints with the old Viper. Now you’ll sit in Sabelt seats, and Dodge/SRT promises that all interior materials have been upgraded with regard to quality and construction. Choose the GTS and you’ll get some extra interior dress-up, along with a 2-mode active suspension, Harman Kardon stereo and a lot of exterior attention.

It’s not a new Viper, but it’s definitely a better Viper. Sure, we’ll have to live with uncivilized additions like stability control, and the interior is getting damned-near livable. But at least it’s still breathing naturally, and spitting fire.

Have you driven a 2013 SRT Viper?
Rank This Car