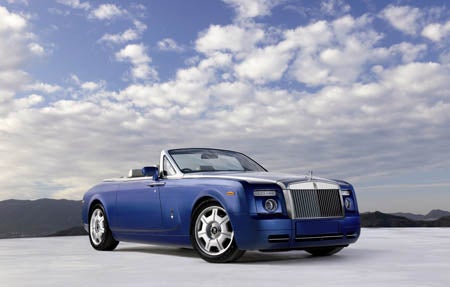 Looking for a Used Phantom Drophead Coupe in your area?

CarGurus has 27 nationwide Phantom Drophead Coupe listings and the tools to find you a great deal.

The sexiest of a set of sisters that make up the Phantom family, the new Drophead Coupe, has just been unveiled. She is also the top model from the top luxury brand, Rolls-Royce, in business for 106 years for a reason. The refreshed line, officially designated Phantom Series II, aims to subtly enhance and update the look and feel of the convertible, first introduced in 2007. (The base Phantom appeared on the scene in 2003.)

The success of the original Phantom managed to revive Rolls-Royce, and it has returned to being the envy of the 1% ever since. Now, with this (some say badly needed) refresh, it aims to knock Bentley off the road, or at least keep it at bay. The most striking new feature is the rectangular headlights that look like an open oblong jewelry case with a bright LED seam; other tweaks include redesigned bumpers and simplified exterior paneling.

Under the shiny hood is a hand-manufactured 6.75-liter naturally aspirated V12 with 453 hp and 531 lb-ft of torque, the same engine used in all the Phantoms. Paired with a new 8-speed transmission and longer rear differential, the engine gives the feeling of liftoff upon acceleration while delivering 11 mpg city, 19 highway.

It’s still gorgeous and elegant, yet more relaxed and sociable than its hard-topped siblings. The interior has been designed to emulate a 1930s J-class yacht and contains such Gatsby-esque features as teak wood, leather contour seating and even a built-in picnic seat for 2 adults. And, of course, the car’s soft top is majestically raised and lowered with the push of a button. Yes, this is a perfect car for billionaires to woo their next bride… or at least have a fun fling with the mistress.

As with all Rolls-Royces, the car’s features and colors can be endlessly configured upon order, including monogrammed stitching and either a fountain-pen holder or humidor built into the glovebox.

But whenever there is change, you can be sure there are those out there who feel the redesign either didn’t go far enough or that its new LED headlamps make it look like a counterfeit knockoff. There are also a few complaints about a lack of responsiveness in the steering.

But to anyone that could actually afford this dream boat, that's all perhaps just idle chatter. The car is exquisitely comfortable, supremely quiet and no doubt will give its owner a special thrill every time he or she opens the rear-hinged door and takes a seat in the captain’s chair.

What's your take on the 2013 Rolls-Royce Phantom Drophead Coupe?

Have you driven a 2013 Rolls-Royce Phantom Drophead Coupe?
Rank This Car

Looking for a Used Phantom Drophead Coupe in your area?

CarGurus has 27 nationwide Phantom Drophead Coupe listings and the tools to find you a great deal.

My 2013 rolls royce phantom battery went low on voltage and car didn't star . So I bought new batteries and install them but car still wont start.