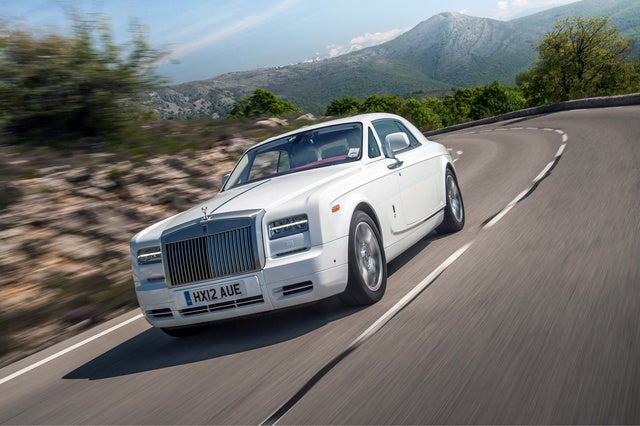 Rolls-Royce's fixed-roof edition of the driver-oriented Phantom Drophead Coupe convertible graces 2013 with several changes—the first changes since the Phantom Coupe's 2009 debut, in fact. Outside, LED headlights are now standard inclusions, accompanied by an especially stately single-piece grille surround. Inside, the hideaway navigation system is updated with 3-D map display capability, and the camera is updated with top, rear and split-front views to help maneuver this sporting land yacht without running aground.

The end result of this light refresh is an even more distinguished exterior lacking those odd "holes" left by the previous front-end electronics. If you were concerned about paparazzi before, the latest Phantom Coupe may let you slip by unnoticed only in the dark with its relatively inconspicuous pair of LED lamps, but that new grille definitely commands attention in the daylight, adding to its understated opulence. Laboriously hand-made and hand-painted in England complete with an 8-hour buff for a true mirror finish, the Phantom Coupe stands out for its regal materials and unique sheen alone, if not its sheer size—the new statelier design serves only to amplify its rich DNA.

As you would expect of a Rolls-Royce, the Phantom Coupe affords a serenely quiet and jostle-free ride for all 4 with effortless acceleration and light steering, but the Phantom line and especially the Coupe differs from most others made by the old R-R in that you are allowed to notice the acceleration and feel the turns—or at least you can feel them more than you would in any other Rolls. The 60-mph benchmark still sneaks up on you in a mere 5.6 seconds, and road imperfections are still completely absorbed with but a hint of their passing in the form of a muffled thump, but the Phantom Coupe is not as concerned with negating every last ounce of G-force. The Phantom Coupe is the purest "driver's Rolls" being made today—at least until the Ghost Coupe arrives for 2014.

That said, the rear is exceptionally passenger-friendly, with ample room for 2 more adults to enjoy a luxurious experience and get in or out easier than most coupes for its power-closing, rear-hinged doors. Rear accommodations also include multizone climate control and the benefit of a 15-speaker Surround Sound system with an in-dash CD player, 6-CD changer in the glovebox, auxiliary input and satellite radio with a lifetime subscription. If taking those pesky subscriptions off your mind doesn't make entertaining easy enough, the knobs borrowed from BMW make for an unusually intuitive approach to jockeying discs, but some magazines warn not every control in its clutter-free console is so remarkable. Namely, the climate controls can be a bit awkward and take a lion's share of the Phantom Coupe's interior controls learning curve.

In terms of materials, the dash could've been a piece of high-end furniture cut another way, and the feel of every touchable surface absolutely will not disappoint. If the vast array of specified customizations doesn't suit you, Rolls-Royce is all too content to custom paint it or tan the hides of all 16 Bavarian cattle used in its interior to your preference, and requests for individual customizations are generally fulfilled. Probably the only thing you can't change—and likely wouldn't want to—is its 6.7-liter V12 pushing out 452 hp and 531 lb-ft of torque to the rear wheels through a smooth 6-speed automatic. Already equipped with features like run-flat tires, parking sensors, all-around heated seats, R-R Assist and a multifunction controller with LCD screen and voice-command functionality, any limitations will only be a result of your budget.

What's your take on the 2013 Rolls-Royce Phantom Coupe?

Have you driven a 2013 Rolls-Royce Phantom Coupe?
Rank This Car