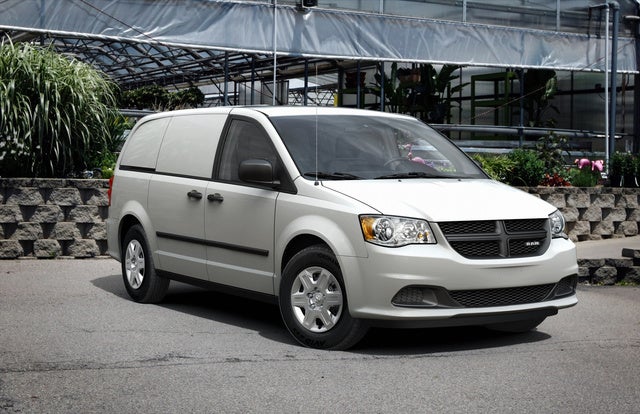 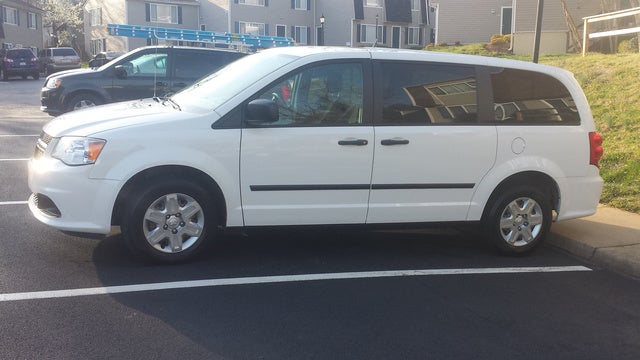 The C/V cargo van continues as a Ram for its second year unchanged over its first. Originally introduced a decade ago for the third year of the fourth-generation Dodge Grand Caravan, the 2012 C/V's shift from fifth-generation Dodge to first-generation Ram meant a few improvements to its suspension, chassis and mechanicals. These changes gave it the ability to handle more heavy-duty applications, and in going only just shy of offering double rear wheels, Ram kept the Dodge C/V recognizably intact.

Powered by the very same 283-hp, 260-lb-ft/torque 3.6-liter V6 as its Dodge predecessor, the 2013 Ram C/V is likewise just as speedy and efficient at 8.3 seconds to 60 mph and an estimated 17 mpg city/25 highway. All-wheel drive remains a pipe dream, with the same 6-speed automatic still directing power to the front wheels only, but the C/V also carries over with the interior materials improvements for the fifth-generation Dodge. In sum, the Ram remains modern if not also gaining a competitive edge.

The only significant differences between the Dodge C/V and modern Ram C/V are the Ram adding a 3,600-pound maximum towing capacity to its specs while gaining 260 pounds of payload capacity for a new 1,800-pound max. But those two technically small differences change things significantly. Otherwise cargo capacity moves from 143.8 cubic feet to 144.4, and attentive drivers might notice a slightly stiffer ride over the original stiff-legged suspension, but it's appropriate and effective for the C/V's needs.

Sure, there are certainly more accommodating vans for cargo, but car-like manners, a 39-foot turning circle, dual side sliding doors, a rear liftgate and the option of solid or windowed walls and doors—even before talking options that cost extra—all set the C/V up to be uniquely accommodating for humans with ample room for most shipments. After all, the C/V is still a minivan, and Ram does appear determined to keep that approachability.

So, the naturally aspirated Flex-fuel V6 engine offers a very feasible in-between option, with its new ratings sitting pretty between Ford's lighter-duty Transit Connect's and those of more versatile competitors like the thirsty Nissan NV and turbodiesel rear-wheel-drive Mercedes-Benz Sprinter Cargo. The C/V is further uniquely positioned by having almost 300 horses and therefore offering among the best highway hauling experiences in its class.

The only real catch is for anyone who didn't originally think to call their C/V-based business Midget Mover (and rightly reconsider), because nobody over 5 and a half feet tall can stand upright inside. That said, owners state they have little difficulty in getting to wares with their feet on the ground thanks to all of its useful doors and cubbies. Any "high roof" format would just overcomplicate the minivan chassis—which Dodge pioneered for its 1984 Caravan debut.

You won't find too many more creature comforts in the C/V than you would in the Benz by default, but the Ram C/V offers a still-impressive list, including a Benz-besting CD player and auxiliary jack for its 2-speaker (optionally 4-speaker) sound system, alongside an auto-dimming rear-view, heated side mirrors, keyless entry, cruise control, rubber floor covering, dual-zone air conditioning and power accessories all standard. Available options are more human-centric than the competition's, including a sound system upgrade with digital music storage and a 6.5-inch touchscreen display, a rear-view camera, 8-way powered driver's seat, Bluetooth and USB connectivity, the Uconnect voice-command system, steering-wheel-mounted audio controls and other such considerations—as well as a few expectedly all-business options like cargo dividers and exterior vinyl tint.

Russell I just got mine, and it has exceeded all expectations.......really fun to drive, superb gas mileage.......I'm averaging 23 mpg in town by using the Econ button...........and this truck is amazingly quick. I could not be happier with it. Oh, I did add convex mirrors for the blind spots left and right, I got the C/V without side windows, and I do appreciate the rear window. Ten out of ten!

Russell I've had it now for six years and still feel just as enthusiastic about it. In town mileage is around 19, and on long road trips, 24 to 25 mpg. It will carry anything I put into it, and is truly fun to drive. There has been zero problems with this van, and I do maintain it carefully by having the oil changed when the little light comes on. Nothing else, other than keeping the tires perfectly inflated.

I bought a 2013 cargo van with out rear seats and with out rear and side windows. i would like to replace the metal panels with windows and install seats.

I have a 2013 Ram Cargo Van w/3.6 engine. Cooling fans stopped working. Replaced fuse no help. Told to check/replace relay. Where is it and what does it look like? I'm getting different info and I c...

Why Has My Gas Mileage Dropped

My 2013 Ram Cargo Van w/3.6 engine highway mileage has dropped from 28mpg to 18mpg. It has 80,000 miles on the odometer. Could it be something simple like a filter replacement or something else?